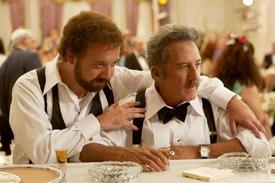 Long before Paul Giamatti made his leading-man breakthrough in Alexander Payne's Sideways, he was an actor who could be relied upon to command the screen, not because he showcased a toolbox of actorly flourishes that announced his presence, but because he stayed true to the character and did exactly what was necessary for it. In his latest film, Barney's Version, he plays the title character, a hopeless romantic who makes some fairly awful choices in the name of love, and true to form he never curries favor with the audience, not matter how unflattering or unsympathetic the character's behavior makes him. At the same time, his own irrepressible humanity creates exactly the kind of relatability that the character needs to remain compelling, creating an indelible, resonant portrait of the sum of one man's life - or at least as much of it as you can cram into a two-plus-hour movie.

Boxoffice sat down with Giamatti last week at the Los Angeles press day for Barney's Version. In addition to talking about the tough choices his character makes and the challenge of keeping them sympathetic, he offered insights into his process as an actor, and reflected on the opportunities and limitations he's faced throughout his career. Talk a look at our exclusive video interview below: