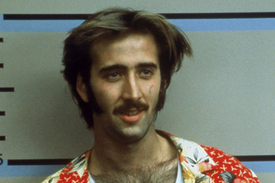 When trailers for Devil started appearing in theaters in fall of 2010, reactions from audiences to the title card "from the mind of M. Night Shyamalan" produced a phenomenon that was eventually called "the Shyamalan groan"—a literal, audible registration of pain at the prospect of seeing another film he was involved with, even if in that case Shyamalan just produced it. But even if audiences alternately continue to cheer him, critics have increasingly responded with a similar sort of exasperation—for years—to the appearance of Nicolas Cage, an actor of considerable talent who unfortunately appears in more bad movies than good ones. (It certainly doesn't help that his performances are wild and eccentric, and regularly out of sync with those of his co-stars.)

This week, Cage appears in Season of the Witch, where he plays a 14th-Century knight trying to determine whether a witch's powers are the source of the black plague. In honor of this latest in a continuing series of dubious-looking films, Boxoffice takes a look back at his almost three-decade-long career to assemble a shortlist of performances that really earned him a place among the industry's top stars, and which showcase the subtlety and dimensionality of his talent when others reduce it to oddball mannerisms and exaggerated behavior.

Randy, Valley Girl (1983) - In his first starring role, Cage plays a punk who falls for a cute upper-class girl despite the protestations of her would-be boyfriend Tommy (Michael Bowen) and a high school community that reinforces the divide between her "haves" and his "have nots." Cage is funny, loose, and genuinely charming, but also believable as a high school kid (well, in his 20s) from the wrong side of the tracks. It's often overlooked in favor of stuff like Fast Times at Ridgemont High, but Valley Girl is one of the best teen comedies of the 1980s—it stands up to almost anything John Hughes did during that decade—and it's credit to cage for giving the film's star-crossed romance more substance than it probably even needed.

H.I. McDunnough, Raising Arizona (1987) - The Coen brothers' second film ranks as my personal all-time favorite comedy, but it seems only because of the Academy's longstanding dismissal of comedies that Cage didn't receive any awards recognition for his turn as the perpetually-befuddled criminal-cum-paterfamilias H.I. McDunnough. It's one of the few films in history that you could probably break down frame by frame and it would still be funny, not the least of which because Cage's facial expressions, and even his hair manage to be more animated than any cartoon character audiences have ever seen. At the same time, he gives Hi a surprising amount of pathos that makes his plight to please his "barren" wife truly sympathetic, even as it's side-splitting at the same time.

Sailor Ripley, Wild at Heart (1990) - David Lynch was firing on all cylinders in 1990: Twin Peaks launched to enormous critical and commercial success, and his latest film won the Golden Palm at the Cannes Film Festival. As one of the film's two lovers-on-the-lam, Cage communicated a kind of desperate intensity that quite frankly only a completely confident actor could convey, finding (alternately) febrile passion and melancholy resignation in Sailor's plight to be with his beloved Lula, and the things he has to do in order to achieve that goal. Lynch of course is the puppetmaster in all of his movies, but Cage proved that he can dance at the end of his strings and still do a few unpredictable things—all of which still manage to work.

Ben Sanderson, Leaving Las Vegas (1995) - Cage deservedly won an Oscar for his performance in Mike Figgis' chronicle of a writer who heads to Sin City in order to drink himself to death. Cage offers many of his familiar flourishes, including a freakout at a blackjack table which at least appears to be somewhat real, but his character's tender, openly self-destructive romance with a prostitute played by Elizabeth Shue gives the film tragic undertones that help the audience sympathize with the guy's otherwise questionable choices.

Charlie Kaufman/ Donald Kaufman, Adaptation (2002) - As unexpected as it would seem to put a then-movie star like Cage in a movie as odd and earnestly "independent" as Charlie Kaufman and Spike Jonze's second collaboration with one another, the actor knocks out not one but two roles as Charlie and his (fictional) brother Donald, two aspiring screenwriters whose lives get consumed by Charlie's intended adaptation of a book about flowers. The technical challenges of playing opposite himself notwithstanding, Cage creates two very subtly different and yet fully distinct performances as Charlie and Donald, and in so doing creates a vivid portrait of the artist in conflict with himself, half propelled by the need to create meaningful work, half directed by the prospect of commercial success at creativity's expense. Cage's is truly a stunning performance, and he makes artistic neuroses relatable in a way that few other actors ever have.

Terence McDonagh, Bad Lieutenant: Port of Call New Orleans (2009) - Technically, Cage's critics could probably count this performance as one of the actor's "out there" turns. But what's really amazing about Cage's turn in the film is that he very carefully and subtly modulates his behavior from one scene to the next according to whatever controlled substance he's on, and miraculously, it all fits perfectly into the tone of the overall film, which director Werner Herzog constructs like a Frankensteinian surgeon. And even if you never figure out why the hell there are iguanas in the film, Cage manages to give even those sorts of oddball hallucinations a believability, thanks to both his legitimate dramatic chops, and his penchant for unexpected, weird reactions.