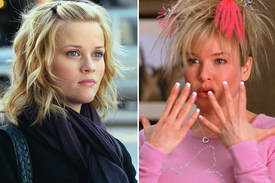 On Sunday night, January 16, Natalie Portman received the Best Actress award at the Golden Globes, and she is seen by many as a front-runner for Best Actress at the Oscars, not only in terms of receiving a nomination but actually taking home the prize. Appropriately enough, the world is eager to see what she will do next. The underwhelming answer is No Strings Attached, a romantic comedy co-starring Ashton Kutcher. Is this the sort of movie a critics' darling and potential Oscar winner should be doing? At least there's a precedent.

Looking through the annals of Oscar history, many actors and filmmakers moved on from high-profile turns in Oscar-winning films to schlock. (Rumor has it that Eddie Murphy's February fat-fest Norbit cost him an Academy Award for his amazing work in Dreamgirls.) As such, and even if it's slightly premature for Ms. Portman, here's Boxoffice's list of six suspect choices from former Oscar winners:

Reese Witherspoon (Best Actress, Walk the Line, 2005) - Witherspoon's turn as June Carter Cash vividly evoked the romanticism and tumult of the relationship between June and Johnny Cash. But her next two projects damaged that virtuoso work: the pedestrian high-concept romantic comedyJust Like Heaven and her supporting turn in the critically-reviled (and worse yet, little-seen) modern fairy tale Penelope. Thankfully 2007 brought her a juicy role with the political thriller Rendition, but returning to frivolous crowd-pleasers after Walk the Line was beneath her talents. (And now she's back in the rom com ghetto.)

Renee Zellweger (Best Supporting Actress, Cold Mountain, 2003) - No matter what you think of Zellweger's twangy accent in Anthony Minghella's Civil War drama, you can still agree she fumbled by following that up with Shark Tale and Bridget Jones: The Edge of Reason, one of the single worst films ever made. To cash in on a commercial hit after earning cred in dramatic fare only made us question where was her edge of reason?

Jennifer Connelly (Best Supporting Actress, A Beautiful Mind, 2000) - We really, really like Ang Lee's Hulk; if nothing else, it has more personality and integrity than Louis Leterrier's bland 2008 crowd-pleaser. But was that the right movie for Connelly after resurrecting her career with an Oscar-winning turn in Ron Howard's A Beautiful Mind? At least she hitch her wagon to a comic book adaptation where the studio was willing to give a real-deal auteur the opportunity to explore the characters. But it was also films like this one that drove Marvel to shun innovation and bottom-line their productions to preserve only the most basic (and least interesting) core elements. So we'll call this one a draw.

Angelina Jolie (Best Supporting Actress, Girl, Interrupted, 1999) - Prior to Girl, Interrupted, Angelina Jolie was an unknown quantity to most moviegoers. But after channeling her inner crazy, Jolie created a public persona that no one would ever forget. So why follow that career-defining performance with a personality-free supporting role in Dominic Sena's remake of Gone in 60 Seconds? It was a two-steps-back gig that required nothing more from her than to be arm candy for her co-star Nicolas Cage. At least the movie lived up to its title as being so poorly remembered, she doesn't have to carry around the legacy of her lame decision.

Anjelica Huston (Best Supporting Actress, Prizzi's Honor, 1985) - Like Connelly in Hulk, Captain EO almost made sense. Huston could work with George Lucas, Francis Ford Coppola and Michael Jackson at the same time. Minute for minute, the most expensive movie ever made until Titanic, Captain EO has a questionable pedigree as a 3D theme-park attraction. Worse than playing its villain is playing a villain wholly overshadowed by her bad makeup. When her face is finally revealed after a blast from Jackson's happy laser, she doesn't even get a good line. No one can predict a bad decision, not even if you're playing a character named The Supreme Leader. And now Captain EO is back up at Disneyland so a new generation can elbow each other and ask, "What the hell was she doing in that movie?"

Sally Field (Best Actress, Norma Rae, 1979) - Sally Field, like Reese Witherspoon, started (or at least secured) her career playing fun, upbeat characters in rfrivolous fare. But after her win for playing a union organizer, she wallowed in a crass and unmemorable payday for the '70s disaster movie Beyond the Poseidon Adventure that neither deserved nor benefited from her talents. Joining the sequel of a lesser franchise after taking home the gold? She definitely went  down with the wrong ship.