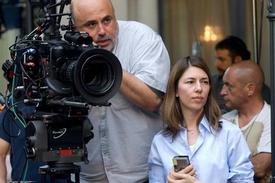 Sofia Coppola is officially free from her father's considerable shadow. The writer/director behind Lost in Translation's new film, Somewhere, is being called a return to form for someone who first drew headlines for her lackluster acting performance in Francis Ford Coppola's Godfather III. The film, starring Stephen Dorff as an hedonistic A-lister forced to care for his pre-teen daughter (Elle Fanning), might nab an Oscar nomination or two before the current awards season dies down.

The character of Johnny Marco haunted you for a while, inspiring Somewhere. What was it about him that intrigued you so—and was the final character close to the person you originally iimagined?

He ended up as the character I first had in mind, an all-American bad-boy actor. The [Chateau Marmont] Hotel has plenty of them. When one would leave another would check in ... there are so many stories about them. [Johnny] is a mix of a bunch of these people.

Echoes of Lost in Translation abound in Somewhere. Do you see it as a challenge to find new shadings to these themes—much like Martin Scorsese visits organized crime in new and novel ways?

All of my films have themes in common ... different stages of my evolution. I don't set out to make it the same, but after I'm done I see it. To me, this is such a different world than I've worked on before.

You've said you like the freedom of working on films with modest budgets—are there times on the set when you wish you had a barrel full of cash in order to make a certain shot happen?

No. I've always made things as small as possible to have complete freedom. I like to make the crew smaller, more simple. There‘s a tendency in filmmaking to get more stuff than you need, and that makes for a lot of waste. I‘m the opposite.

One can look at Johnny and say, ‘what does he have to complain about—he's living the dream.' Did you focus on reversing the sentiment as you crafted the story?

I could see how the character could be unlikable and unsympathetic. I thought by casting Stephen Dorff, who I knew as a sweet guy, it would bring heart to the role. I wanted to write about something in our culture, how we aspire to become famous. [Johnny‘s] life should be fun with all the girls and Ferraris, but it‘s so out of balance. I tried to contrast the superficial pleasures with the genuine ones.

Stephen Dorff says while most scripts are overwritten—yours leave space for an actor's interpretations. Has that always been a conscious choice for you, and how did you have the confidence as a young filmmaker to tackle that style?

I've always been drawn to working that way, telling a story in a more visually driven way. I‘d rather have that than trying to explain everything. People don‘t say how they‘re feeling, they express it with a gesture. It‘s just in my nature. I like writing that way.

Can you talk about how your formal art training has impacted your filmmaking style—do you still pursue art when you're away from a big screen project and does one medium help feed the other?

I just think being creative, that it's all connected. You learn things from one that come into the other. Film provides areas that I find interesting, from music to photography and design. They‘re all in there.

You've had a remarkable life—and not everyone has the good fortune of having a legendary director for a father. But do you give advice to young directors at this stage in your career—and how would you advise them as a filmmaker starting out in 2011?

I don't think of myself in that way, but people have asked me stuff. It‘s hard to think that I‘m not just still starting out myself. I‘m lucky to have learned from my dad. I think of all the things he told me about filmmaking the best advice he passed on to me was that story and acting were the most important elements in a film.

Thoughts on Video on Demand and other streaming services for first-run movies—would it upset you after painstakingly making a film like Somewhere to have people watching it on the small screen rather than the big one?

A: As a viewer it's cool that things are so accessible. My friend got the DVD [screener of Somewhere] and I said, ‘try to see it in a theater.‘ It's harder to focus on a quieter movie at home, you get distracted too easily. The [VOD] films are often listed alphabetically, so I hope they'll scroll down to see my film.