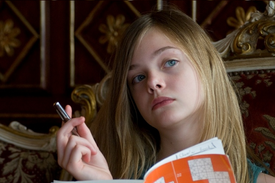 Everybody loves Elle. Really. At 12, she's been directed by David Fincher, Tony Scott and Sofia Coppola with blockbusters by Francis Ford Coppola and J.J. Abrams (his super-secret Super 8) on her horizon. Her latest, Somewhere, casts her as Cleo, the preteen daughter of immature actor Johnny Marco (Stephen Dorff). After years of distance and trying to be the perfect daughter, Cleo knows that she's the adult in their relationship—and she needs him to step up. Though the flick's firmly established her acting chops, Fanning smiles, "I just do movies on the side," in an interview that covers two Coppola's directing styles and growing up healthy in Hollywood.

One of my favorite scenes in Somewhere is when you're giving your dad a silent glare over the breakfast table for letting a pushy Italian girlfriend stay over.

Oh, yes—everyone loves that scene. It was a fun one to shoot because we were in Milan and that was the first time I'd ever been to Italy before. I think Stephen actually got genuinely freaked out with with my silent glare.

And it's a telling moment in a movie where you and your dad don't communicate very well through words. You have to get your feelings across through body language.

Sometimes it's hard because it's not totally laid out for you—you have to come up with it on your own. But it's also good because there's not this pressure to do everything perfect and right. Sofia's scripts are very small. They just lay out the structure of the story and then we fill in the holes. It's crazy because you don't really need to use your voice. You can communicate with just your feelings and your eyes.

Your character Cleo is almost a perfectionist. She's a girl who's under a lot of pressure.

I feel like Cleo has been putting up with her dad and his whole lifestyle, but she's always had her mom to fall back on. Now that her mom is gone and she has to live with her dad, she doesn't even know him that well. And because she's older, she's realizing what's going on with him. He needs to be a role model for her and grow up himself now that she's older.

I kept thinking, 'Wow, she's really knocking herself out to impress him.' But is he appreciating it?

Exactly. Every child wants their parents to love them. He definitely does love her, he just doesn't know how to show it. He's just mixed up in his own lonely world and Cleo brings him out of that and makes him realize that he needs to straighten up his act. At the end, you feel a glimmer of hope. You don't know what happens, but you feel like everything's going to be fine.

In your scenes, you almost get along better with his friend, Chris Pontius [of Jackass]. You guys can relax.

Yeah—he was crazy in the scenes. All of the scenes were different with him because it was totally spur-of-the-moment, whatever he came up with. Sofia just let him go. He'd come up to Sofia sometimes and tell her a story that he was going to tell me, and she'd be like, 'Oh, that's great! But don't tell Elle because I want to get the real surprise reaction from her.' So whenever I was filming with him, I was on edge, like, what is he going to say next?!

What is that like as a young actress to have to seem like a ordinary, realistic child? That sounds like it'd be really hard when you've grown up in the business.

It's true. The whole movie, you have to act like the camera's not there. The Guitar Hero scene was the most relaxed because I play Guitar Hero at home. You just know how to act natural. It's refreshing to see everything not so staged and set up.

Talk about creating the character of Cleo with Sofia. You both grew up surrounded by the industry—were you able to speak about Cleo's world in shorthand?

We had a lot of rehearsal time together to talk about the character. She had us create these fake memories, so me and Stephen would be having lunch, but in character. And then the person who played my mom would come and have lunch with us like we're a family. Sometimes, we'd play that Cleo was younger and Johnny hadn't gotten his big job yet. And then Sofia would be over at the next table having lunch, but not really listening—it was more for us so when we did scenes together, we could look back on those memories.

And in the film, you can actually figure skate. Was that written for you, or did you have to learn how to do it?

I had to learn! I'd done ballet before and, of course, I knew how to ice skate, but just gliding forward. I did not know how to figure skate and do all the moves and turns. I had to train for about three months. I got up every morning before school and went to the rink-and after school, as well. Once I got good enough to show Sofia some of the moves, she came in and picked out the song she wanted me to dance to, and then the choreographer and her put together this whole thing. At the end, neither Sofia nor Stephen had seen me do the full product, so Sofia reserved that whole day for the ice skating. They both saw me, and the whole crew saw me, and they were all just clapping—it felt really great. It was like a surprise for them! I think Sofia probably thought she was going to have to get a double, but she didn't. And she really filmed it like it was me, which is great. Sometimes they just do the feet or they just do the face.

She shoots it at a wide enough angle where you can see that your body is definitely connected to your head.

You've had to do a lot of physical training in your career—you were just in The Nutcracker 3D.

I think that's what's cool about films—you can learn so many things that you probably wouldn't learn in real life.

What do you think a female Johnny Marco would be like? Would she have male groupies?

I guess she'd be like him in that he doesn't really have anyone around him who really supports him or really cares about his choices. And he's also living through his films and doesn't have a life outside that world. So I guess a female Johnny would be the same in that she'd just fall deeper and deeper into that small world.

People publicly talk about what a great job your parents have done with you and your sister. Dakota was just voted Homecoming Queen for the second time.

Do you talk at home about how to avoid falling into celebrity traps?

Yeah. We don't really talk about 'being normal,' but they definitely wanted us to have that whole experience that they had when they were kids. And we do—we have sleepovers, we go to sleepovers, it's totally fine. Somewhere was good because it was in the summer so I got to do school that whole year. My school's great because they send the work with me and I can keep up with it on sets. I do everything normally; I just do movies on the side.

What's it like to be a young actress in Hollywood? It seems like tabloids are always trying to capture young girls in trouble—it must be a lot of pressure because you can't relax the way you could if your family had never left Georgia.

Right. I think that right now, I'm so busy and it's exciting to go to premieres and places that you never really would go before. When you're in movies, you have times where you're not really doing anything, and then it picks up and you're doing all this stuff.

Do you feel like teen actors can get away with more than teen actresses?

And you're so tall—

So I know that you can't talk too much about J.J. Abrams' Super 8, but I heard that he was drawing a lot of inspiration from Steven Spielberg's films from the '70s and '80s.

Yeah—Steven's a producer and J.J.'s getting a lot of inspiration from when he was a kid and Steven was a kid, what they did when they were growing up. It's really fun. It's cool to go from Sofia's set, which is so calm and small, to J.J.'s which is huge with explosions and stuff. We're almost done filming it—we'll be done really soon—and then I'm starting other movies.

Like Twixt Now and Sunrise, directed by Sofia's dad Francis Ford Coppola. Did she give you any tips on making him happy?

He came on set when we were in Los Angeles, but he never came back! Then he called a few months later and said he had a script, if I'd like to do it. We've already shot some and then in February, we're going to do more. On his sets, I can definitely tell where Sofia gets all her talent from. He's such a legend. Just to be talking to him is incredible.

Having seen them both in action, are they similar on set?

Yeah—they both treat the crew with respect. Their sets are very calm, but Francis' voice is definitely way louder. He's an Italian guy—it's way funny.

What role did you have in picking the outfits Cleo wears? They're fantastic.

Definitely! I remember the first time I went in for a fitting, Sofia had a lot of Marc Jacobs stuff there. Cleo is just relaxed and normal—not too fancy—but it was really fun to pick out all the different stuff and try on the t-shirts and jeans. I was thinking, 'Oh, this is going to be so cool because Sofia has such a great sense of fashion.' The whole movie with the Italian awards show and all those crazy clothes was really fun. This one time I went into where they kept all the costumes and they dressed me up in this crazy outfit!

One of the ones with the sequins?

Yeah! I put my hair on my head and made a bow out of it—

Yup, and put on glasses and super high heels. It was really fun.