'Cedar Rapids' Director Miquel Arteta on the Possibility of a Sequel 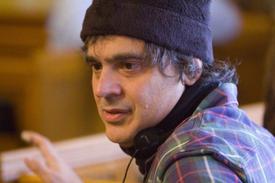 Director Miguel Arteta‘s big screen career took off after his film Star Maps made a splash at the 1997 Sundance Film Festival.

Arteta's comedy career couldn't be much more diverse, ranging from the awkward indie Chuck & Buck to the rebellious Youth in Revolt. Yet he tackled Cedar Rapids, in part, because he felt a connection to the innocent main character.

There's a classic fish out of water element at the heart of Cedar Rapids—was that part of what attracted you to the project?

I liked the story of someone who's kind and has to remain kind but not be a chump. I love the arc of the story. It's a movie about unexpected friendships.

Ed Helms is typically part of an ensemble, but here he's the main attraction. Can you talk about his performance and how being a character actor influenced the film?

He's been training toward this since "The Daily Show." He's not only a good comic but a good actor, and that's not always the case. He has a quality I haven't seen since Jack Lemmon. He can do sweet comedy from a wholesome place and still have an edge to it.

And he can disappear [into a role]. He looks very regular. You could believe he was an insurance agent.

The film initially pokes fun at Middle America and later shows its dark underbelly. Was there a concern the story could be condescending?

We wanted to have some fun with [the characters] but not make fun of them. A lot of effort was made to ride that line. [Screenwriter] Phil Johnston is from Wisconsin. He spent time as a reporter there. He has a true love for these characters.

Ed and [Executive producer] Alexander Payne made sure we didn‘t go over too far. Alexander made us change the restaurant in one scene from an Olive Garden to a sushi place to show the Midwest in a real and unexpected way. I'm hoping people get that.

How much did John C. Reilly influence his character? It's such a glorious comic turn.

He's very, very smart and thoughtful. To say a line like, "my wife is an asshole" and still have a sweetness to it and see it comes from a place of longing ... I marvel at his talent. He understands that comedy really comes from truthfulness and pain. There's never a moment where the bitterness of his character's divorce is lost on him.

I understand you're not a big fan of improv on the set; Was that an issue during Cedar Rapids at all? Has your position evolved on the subject?

I'm definitely becoming looser as I get older. Movies are about responding to material and not trying to control it. The more confidence I grow the looser my sets are becoming. When you have a cast with Ed Helms, John C. Reilly and Anne Heche, to not improv would be a crime.

Cedar Rapids is a Fox Searchlight film and it debuted at Sundance, but the movie has mainstream written all over it. Why do you think the film has charted this course so far?

Movies like Little Miss Sunshine and Napoleon Dynamite—I wish studio comedies were that good. That's how they ought to be.

There's a lot of flexibility at Sundance. It's always a place where discoveries happened. That's where I was discovered. There's more leeway there, too. I hope ["Cedar Rapids"] has mass appeal. We wanted to do a sweet film. It's hard times out there, so it's a little more wholesome with some foul language in there for good measure.

The film finds a comfortable comic rhythm between the three male leads and ends with what seems like a nod to a sequel. Has that been discussed?

Cedar Rapids: Electric Boogaloo" (laughter). I have no idea ... I hope so. The scene near the end of the movie with them hanging out was shot because the chemistry was so undeniable on the set. You don't always get it. You roll the casting dice and hope it happens. When it happens you want to do more. I knew they had chemistry after shooting the scavenger hunt scene with them falling into the pool with all those balls. They were like little children playing with each other. I thought, ‘this is really special.‘

A film like Chuck & Buck feels so very different than Cedar Rapids—any plans to re-team with Mike White?

MA: I spent last year shooting a TV show he created with Laura Dern and Luke Wilson called Enlightened. Mike wrote 10 episodes and I directed four of them. He's my favorite writer.

Any news to share about a possible project with Adam Sandler that's been discussed about an 800 lb. man who falls in love?

I'm not attached to that, but it was given to me that Adam was considering it. I really responded ot the material. It escaped every cliché that such a story would have and was surprisingly funny and moving. I hope he gets the gumption to do it.