Video Interview: How Amber Heard Held Her Own Against Nicolas Cage In ‘Drive Angry' 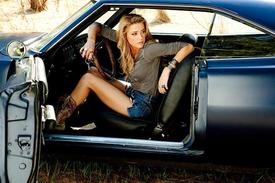 Although he's never suffered from a shortage of capable leading ladies, Nicolas Cage's, well, idiosyncratic performance style often has a tendency to overshadow everything and every one else in his movies. But in Drive Angry, Amber Heard is more than a match for the actor, playing an jilted waitress who winds up on the lam with Cage's John Milton, an escapee (literally) from Hell who's hunting down a crazed cult leader (played by Billy Burke) who possibly could have himself been a Neil Diamond impersonator in a previous life. Boxoffice sat down earlier this week with Heard at the Los Angeles press day for Drive Angry, where the actress looked absolutely stunning (see the exclusive video clip below) as she discussed turning ‘damsel in distress' clichés inside out.

How clearly defined was the almost parental relationship between your character and Nicolas'? Another version of this film could have had you two getting involved romantically.

How much physical preparation did you have to do? Not only do you throw a lot of punches, but you take a lot of them too, and your character is unbelievably resilient.

She's got a lot of heart—I think that's what it comes down to. When you see her get up in that fight with [her fiancé], played by Todd Farmer, and she keeps antagonizing him and she keeps fighting and keeps fighting, that's what made me like this character and I think that's what makes people like this character. That kind of wraps her up in a nutshell—that's Piper. She keeps fighting, and I loved that. But I did fight training and stunt training and even did some driving training with the stunt coordinator, and it took five minutes on each of those to realize that I was good. They took me into a parking lot and I kind of got to do donuts, and the stunt coordinator, Johnny Martin, who did Gone in 60 Seconds, showed me how to do the stuff you're not supposed to learn. For five minutes, I think I had him pressed up against the glass in the passenger seat of the car, and then after that he was fine—he trusted me to be able to do it.

I mean it as a compliment when I say you do some amazing hair acting in these action scenes. Is that something that you do actually have to consider? You're in the back of a camper and you have to make sure the camera is getting what it needs, but you have to be in the moment, kicking ass as well.

I think that kind of wraps up my job as an actress as well, because you are constantly dancing the line between having it all covered, knowing where every hair is falling, where every lash is pointed, and yet you have to delicately balance that with not thinking about it at all, not giving a shit, because that's what your character would do. That's kind of constantly what you have to do as an actor, no matter what the role - you have to never think about your hair, and yet always be conscious of where it is. And the only difference is that in this movie, I look any way I want and still get the job done; there's a freedom in that.

This film is sort of an interesting nexus for a lot of the different sorts of films you've done—including a lot of horror, and a lot of comedy. How do you think about each new role you take on in the context of what you've done or not done in the past?

I always tend to find a certain amount of creative license in genre films, because when you have elements like the supernatural or the mystical, you can get away with a lot more and have more creative freedom. You can have a lot more creative freedom than you would in, say, something that's based 100 percent in reality. Also, on a character level, it allows you to work a lot more when you're experimenting with characters and choices; I think as an actor there's something to be said for the potential in genre films. That's why I do them so much.

Is it more or less of a challenge to find things that audiences can relate to? Is it more difficult to find something that connects with the audience, or is it more freeing because it is pure fantasy?

I think both. I think you always find those elements, like I said, when I was building Piper I had to find elements that made her human, relatable, honest, and yet I had to be over the top and compete with people who were literally—literally—not of this world. I had to dance on the line between being fantastic and over the top and real and sensitive and emotionally relatable.

When you're getting into the mindset of doing an exploitation movie like this, it seems like it's a good opportunity to go back and watch some classic grindhouse flicks. What sort of "research" did you do?

I think Vanishing Point, Gone in 60 Seconds, the original and the new one, movies like that lend themselves to this unabashed, politically-correct, completely unapologetic approach to exploiting the muscle-car, girl-in-shorts kind of thing. It's fun - it's all part of it.

Is it hard to find roles that sort of combine all of those different elements?

Yeah - this role was unbelievably hard to find; this is going to mess me up because it's raised the bar for me for what I have [to look for]. When I get excited about a part now, it's got to live up to this now, and that's tough - it's set the bar anew for what I'm going to dive into. I can't tell you how hard it is to read a female character that is written interestingly, or written in a unique way, much less when it's strong and independent and doesn't rely on being the romantic interest of the male lead so that his character can be supported. A female character that's opinionated and strong yet still sexy, we tend to think that if the girl's in daisy dukes, then she can't be opinionated and strong and willful or she can't save somebody. I watch movies and I just wonder who made the rule that women can't also have that fun, play those games; why do I always need to be the one to be saved? And Todd Farmer wrote such a cool character; she actually saves Nic Cage's character more than he does her, which is really cool. And she can be sexy too!

By page four, Amber Heard had wild ideas about how crazy Drive Angry could get. Check out our exclusive video chat to hear her explain: