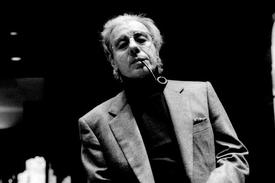 In the pantheon of the greatest composers in film history, Lalo Schifrin stands among a select few others—say, John Williams, Jerry Goldsmith, John Barry—whose music remains as influential as it is timeless. His compositions for films in the 1960s and ‘70s - Bullitt, THX 1138, Enter the Dragon, The Amityville Horror - quite literally changed the face of film music, managing to be reflective of a specific time in pop culture and cinema history while defining a tone and a mood that would be imitated for decades to come. On Wednesday, Schifrin appeared in Los Angeles at the Egyptian Theatre for a double feature of two iconic films with his equally iconic scores, Dirty Harry and Cool Hand Luke; Boxoffice caught up with the composer via telephone earlier this week to discuss his work on those films, and to take a look back at the enormity and resonance of his achievements over the last five decades as one of the most famous and important composers in Hollywood history.

How gratifying is it that people continue to love and celebrate films that you worked on as much because of your music in them as any other component?

Well, I feel very fortunate that I was able to leave an imprint in the history of film scores. But I don't believe in the cult of personality; they were jobs, and I did the best I could.

You, Quincy Jones and David Shire were instrumental in defining the sound of 1970s film scores. Was it simply your natural interest in jazz that led you to use that sound as a composer?

Of course, jazz is one of the foundations of my influences. But also, I had a classical music education on one hand, but on the other, [because of] my personal curiosity to understand ethnic music, like the folk music of Asia, North Africa, South America, I applied those things to [my music]. For instance, in Enter the Dragon, because I knew the sound of the Orient, I was able to express myself, and I didn't use jazz there. Or when I did The Four Musketeers with Richard Lester, I didn't use jazz at all; it was 16th century Europe.

Dirty Harry has all of these really interesting thematic throughlines—it's jazzy, psychedelic and dissonant. How tough is it to come up with something that encapsulates all of the different threads?

What happened was that Don Siegel was used to instrumental scores, and with all of the composers he worked with before myself, they were all instrumental scores. On this particular movie, I said, "I'm going to use voices," and this was unknown territory for him. So he said, "why do you want to use voices?" I said it was because Scorpio, the bad guy, he's crazy, he's definitely crazy—he's a serial murderer, and if he's crazy, he hears voices. And then he bought it. And it was successful; I didn't have a choir, but I had one voice, or sometimes three or four when it was hysterical, and he liked it. The public liked it, everybody liked it.

Have you ever been limited by the success you've had? You wanted to do a more straightforward orchestral score or an electronic one but someone wouldn't let you?

I did use electronic—not all of the time, but I liked what they call electro-acoustic music, mixing electronics with regular instruments. It was nice because people didn't know what it was.

Was that easy to incorporate into the rest of your music?

Well, when I was in the late ‘60s and ‘70s, [with] all of the big composers, my colleagues like Jerry Goldsmith and John Williams, there was no difference in the work they did for television or movies. Later on it became different and television was a second-class citizen, but for us it was the same responsibilities, and the same love for the audiovisual counterpoint that's applied in any kind of art form like television or movies.

How much of your use of electronic instruments was you experimenting as opposed to you introducing elements you already knew would be interesting to audiences unfamiliar with the sounds they produced?

For instance, the main title of the show "Medical Center"—the mission of a main title on television is to remind the audience, if some member of the audience is in the kitchen and the television set is in the living room, that they hear it and say, "oh, ‘Medical Center' is on," like an identification. So the main title was animation of an ambulance coming to the viewer from the distance getting closer, and what I did was to have a moog synthesizer imitating the siren of an ambulance, and with the same sound, when I wrote the [music for] the show, the same sound becomes a melody. It took a few seconds, but it was a very effective thing, and it was not only loved by the producer and the director, but even the studio and the network; it's very unusual to hear from the head of the network, CBS, but I got a congratulatory letter because it was very unusual.

How do you tend to work—do you come up with themes or leitmotifs, or do you focus on ideas or moods?

That's a very good question. On Cool Hand Luke, at the very beginning, it's very depressing; the opening titles are over the first morning that Paul Newman has to be in jail, and it's a very sad, depressing thing. I came up with the idea to have one guitar—acoustic guitar, not electric—and then a second guitar comes. The second guitar does a theme which has a lot of sadness and melancholy, so I started with an instrument, but also with a theme.

Do you need to have a theme and then find the instrument that best goes with it?

They go together. This is something difficult to explain, because I don't even know how it happens, but they come together.

One of the recordings of yours I particularly like is the disco arrangement you made for The Amityville Horror. How tough was it to recontextualize your theme in a sort of pop context?

Oh! That was exploitation. I was not too fond of doing that, but I was asked to do it to help exploit the commercial success of the movie. I didn't mind, but that's not in the score; again, here there were voices, children's voices, which were a distorted lullabye, and very eerie. But I'm a composer; I'm not to good at writing commercials.

How tough has it been to differentiate your own pop or jazz projects from your film scores?

They're separate. I prefer to write music for movies, and some albums I did were concessions, but the albums I like the most now are the Jazz Meets the Symphony, and I did jazz with Dizzy Gillespie.

In the 1980s and ‘90s you became more involved in conducting and performing than composing. Was that where your own creative impulses took you, or was that where people's interests in your work migrated?

Well, the problem is and I'll tell you very honestly that I'm a little disappointed. I did things in the ‘80s and ‘90s like Rush Hour, and that's not bad, but most young directors and young filmmakers will come in with, and also the studio politics, is that a composer has to... put [his music] into synthesizers to imitate what a score is going to be about, and [these abbreviated recordings] are very cold in comparison with the acoustic music, because when the musicians are in the studio, I'm talking about an orchestra, the bouncing of sounds, the harmonics, the reason why it's warmer is because you have to program the harmonics, and there's not time to do that, so it becomes cold. The other things was that I had to do a temp track—they buy records or use existing music and they put it in the movie because they are afraid that the head of the studio is not going to like it with music. So they put music now all over, and then they want a composer to imitate or paraphrase the temp track - to change it enough not to infringe on copyright laws, but there is no more creation. I couldn't have done Cool Hand Luke that way.

Does the kind of work you do now fulfill you as much as composing did?

Of course. And I'm not only doing arrangements of others' music, but I'm writing my own. It's very exciting.

Are there any scores you're especially proud of that people may have overlooked over the years?

For example, was the score to Pretty Maids All in a Row ever released?

I don't think so.

That's a particularly crazy movie. Does that kind of eclecticism or weirdness give you more ideas or does it make it harder to create a cohesive score?

I did like to work with Roger Vadim, but I was a little bit disappointed about what the movie was about. It was not a bad movie, but it wasn't something that inspired me. I did what he asked me and that's it.

Looking back at the film scores you composed, what are the films that inspired you the most, or the ones of which you're the most proud?

Cool Hand Luke and Dirty Harry are two of the ones that I liked the most. Also, another Don Siegel movie, The Beguiled, that was good. And The Eagle Has Landed and The Four Musketeers, that was nice.