How did they do that?! Foley artist Blair Slater on the sounds of 'Sanctum' 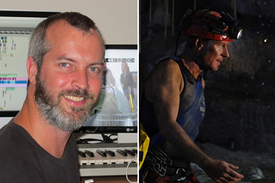 (as told to Boxoffice)

Picture Sanctum. Compared to an above-ground film, here we had so many different soundscapes to work with: crowded markets, jungles, underground, underwater, underwater and inside a mask. On top of that, there's rain, air bubbles, splashes, drips. The biggest challenge was simply creating the different surfaces from wet, uneven stone to mud, rock pools, puddles and jungle floor, just to mention a few.

Before I started in this business, I was a musician. I actually began my career working at a music recording studio, but I was always interested in post production sound so when that studio closed, I took an assistant job at Soundfirm and eventually worked my way into foley. I did Moulin Rouge, House of Flying Daggers, The Bank Job—lots of Australian movies, too, because that's where I'm from. Foley artists work long hours with a fast turnaround. All nighters for sure. On a few occasions, I haven't left work for up to five days and I'm sleeping, eating and showering at the studio.

I wanted to do Sanctum because it'd be my first 3D film and it presented an opportunity to work on an unusual environment. There's quite a lot of trial and error (budget pending) creating sounds that the Sanctum audience will hopefully not realize are recreated in a studio. Essentially, we design sounds to enhance the onscreen action without bringing attention to it. Most of our preparation was in collecting the props needed to recreate the movement of our characters and then preparing the right surfaces. Like mud: you have to get the right depth and consistency to capture the sounds correctly and efficiently. Fortunately production supplied us with a lot of the actual scuba and climbing props which allowed us to genuinely perform and record all the action with real oxygen masks and tanks.

Most of the underwater effects were recorded out of water and then later digitally processed to sound as though performed underwater. Live action water effects are always difficult to recreate in a studio due to the lack of depth and volume of water on hand. Oh, and heat. The foley studio at Soundfirm is fitted with a spa bath but no hot water, so my partner Mario Vaccaro had to don a wetsuit and throw himself around in water for hours on end. I had a lot of fun recording and editing his water action, and then layering and pitching down the sound digitally to give a sense of depth. Mario may beg to differ.

A lot of the time, we're trying to recreate sounds we've never heard before, like say, a stalagmite piercing someone in the back and then breaking off. (Not going to say who if you haven't seen it.) Imagination plays a big role. I really enjoy the challenge of building sounds from elements and props that have no resemblance to the final sound effect. When we worked on Anaconda 2, we used a combination of chicken carcasses, banana tree trunks and a leather jacket to create the sound of the snakes.

The rest of the time, we recreate sounds that people make. If a character is holding a glass which they put down on the bar, we record the sound of the glass hitting the bar. This sound can change enormously depending on the character. An overweight, angry man whose marriage has just failed would put the glass down differently than a twenty-something woman in a bar meeting a blind date. This can only be done by recording the sound on a case-by-case basis-the movement of something living is random and difficult to imitate synthetically.

And some of the stuff that takes the most work are things get ignored. In Sanctum, the footsteps and movements needed a lot of detail. We recorded up close to purposely over emphasize the perspective for a claustrophobic feel. It helped that our characters were often carrying scuba and climbing gear which allowed us to make their movement noisy complex-on its own, I doubt people will notice-listen for them when you see it-but I hope what we did added to the overall atmosphere of the film.

What I think gets me hired for new projects is that I'm willing to try new and different ways to enhance the atmosphere of the film. And I can work (and work well) under pressure. People think foley work is easy and constant fun, but there is hard work involved ... occasionally. I just opened up Longstocking Studios, my own company. We've got heaps in the pipeline. I'm currently working on a TV series called Shameless and Mario and I are getting back together to work on another film with Sanctum's Sound Designer Paul Pirola for Soundfirm called The Killer Elite. And I'm about to begin work on a series about dinosaurs which will be a lot of fun—not to mention very messy. Lots of raw meat and breaking bones, vegetation, dirt and eggs. And even when I'm not at work, I am definitely still aware of sounds. I always have my eyes peeled for any bits of discarded junk that may produce an interesting sound. I never pass by an op shop without checking out their trinkets. I'm definitely of the opinion that one man's trash could be my treasure!