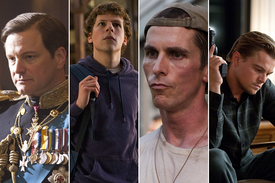 Well, that's it. Will this go down in history as an undeserved win? I certainly think so.

I was still hoping Bening would pull out a victory here. Oh, well.

Fincher was robbed. What a shame. Hooper is a great guy, but he didn't deserve to win this year.

Best Original Song: "We Belong Together" from Toy Story 3

A crucial win. David Fincher's film has a lot of momentum...

I really hope Exit Through the Gift Shop wins.

I guess this is the "Young & Hip" portion of the show. Lame.

Interesting. I thought the King's Speech would win here. Could this be a sign of weakness?

Christopher Nolan's flick should do very well in the tech categories. It has the advantage of being a film that people actually like—it's not a brainless blockbuster with flashy technology behind it.

Nicely done, Academy. It's great to see an unconventional score take the prize.

Yes! Where's the real Dicky Eklund at? He popped up on stage at the SAG Awards and he should be here for this. Spoke too soon. A plug from Bale for Eklund's business. I hope the site's servers are ready to handle a rush of traffic.

Where did Franco go? Maybe a trip to Waffle House?

Of course. Great speech by Sorkin.

Well, the personal "For Your Consideration" ads didn't hurt her after all. She delivered a terrible speech.

Wow! Definitely an upset. Roger Deakins (True Grit) was the favorite to win.

There's often an upset in one of the five major categories. Remember when Adrien Brody won for The Pianist over Jack Nicholson (About Schmidt) and Daniel Day-Lewis (Gangs of New York)? Then there was Tilda Swinton taking Best Supporting Actress for Michael Clayton over Cate Blanchett (I'm Not There) and Amy Ryan (Gone Baby Gone).

I think Hailee Steinfeld (True Grit) over Melissa Leo (The Fighter) for Best Supporting Actress seems like a very real possibility. I would also love to see Annette Bening beat Natalie Portman. Bening's performance in The Kids Are All Right holds up after multiple viewings. Portman's does not.

The fact that The Social Network producer Scott Rudin is staying in New York instead of going to the Oscars may be the final nail in the coffin. I'm still hoping for an upset over King's Speech, but it doesn't look likely.