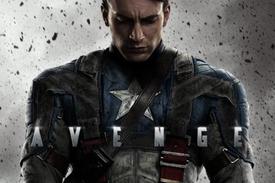 Captain America is doing quite well on Facebook after airing its first trailer during the Super Bowl. Here's a list of approximately how many new supporters the films featured right before, right after or during the game have added since 3 p.m. PT on Sunday.

Rango with a nice send-up of how all the Super Bowl ads are full of explosions. Nicely done.

Pirates of the Caribbean: On Stranger Tides ad didn't have as strong of an impact as the others. Plenty of footage has already been released for that one. Healthy increase of around 220 new fans in about five minutes. Not bad.

Captain America trailer is underwhelming. Something seems off there. Still, it has added 160 new fans in less than three minutes. Fastest bump of the game.

Super 8 looks amazing. Expect a huge Facebook bump for this one.

Thor trailer is one of best. Nicely done. 93 new fans in a matter of minutes. Not seeing a bump as fast as Transformers and Cowboys & Aliens.

Wow. Already 130 news fans in less than five minutes for the Transformers page.

Transformers: Dark of the Moon ad is nothing special. More robots blowing stuff up. Let's see if it gets a Facebook bump.

121 new fans for Cowboys & Aliens and the ad only aired a couple of minutes ago.

Cowboys & Aliens. Could be the next Wild, Wild West, but I doubt it. Looks like a great piece of summer fun.

Kung Fu Panda 2 ad seemed to work. The most active page has already tacked on 400 new supporters since 3 p.m. PT.

Kung Fu Panda 2 ad is loud and obnoxious. Gotta get it in before the little kids have to go to bed and/or completely lose interest.

Before the coin flip there's a commercial for Just Go With It. Jennifer Aniston is almost entirely absent. Coincidence? I think not.

Great preview for Battle: Los Angeles. Won't be the first one tonight.