'Red Riding Hood' Star Amanda Seyfried: I Try To Be A Mystery 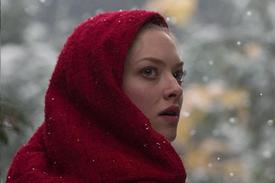 Like every child, Amanda Seyfried grew up hearing the story of Little Red Riding Hood. But the heroine she imagined was way different from the role she took on in Catherine Hardwicke's re-imagining. "The story I was told was very basic and this movie is quite the opposite," says Seyfried. "She's older in this version and has much more at stake."

Compared to the wan princesses mooning over their Prince Charmings, Little Red has always had spunk. Here it's doubled, as the blonde in the scarlet coat finds herself torn between two suitors, the poor and sexy Peter (Shiloh Fernandez) and the rich and doting Henry (Max Irons). "She's young, curious, and assertive," says Seyfried. "It's a beautiful mix—you know from the beginning she'll get what she wants."

Little Red is also Seyfried's chance to star in a hot-blooded fairy tale by Catherine Hardwicke, the director who turned Kristen Stewart and Robert Pattinson into household names and tabloid stars. "Catherine sold the whole idea over lunch," says Seyfried. "More than most directors, she's interested in the real passions of a young woman—her leading ladies aren't just 'the girl.' Her heroines are fearless and smart, to say the least."

That's important for a 25-year-old ingénue determined to last in the business. Seyfried's resume shows a young actress who doesn't want to do the same thing twice. She's shot a comedy (Mean Girls), a romance (Dear John), a sexual drama (Chloe), a horror (Jennifer's Body), a true crime tale (Alpha Dog) and even a musical (Mamma Mia!).

Audiences knew Seyfried could act, but many were surprised to learn that she could also sing and dance. She's a triple threat, a classic Hollywood skillset she shares with few other contemporaries besides reoccurring co-star Justin Timberlake, who shared the screen with her in Alpha Dog and co-stars in the upcoming Now, a futuristic thriller about a society that refuses to age. But though Seyfrie has recorded songs for several of her own soundtracks and danced in the third highest-grossing musical of all time, she deflects the compliment. "It's probably necessary to be great at all of these things and I did appreciate each of them separately growing up," she says. "But dancing-not so good anymore. And singing has fallen by the wayside, sadly."

"The decisions I make have a lot to do with the type of character I'll be playing," explains Seyfried. "The director is just as important. I need to see their vision and connection to the story and the characters in them—if these two things seem to feel right to me, I'm in."

Hardwicke's vision for Red Riding Hood was clear. "Every drawing, sketch and visual was realized in our movie," says Seyfried. Which doesn't mean there weren't surprises. "It's so much darker than I imagined. She's a magician, I think."

"The locations and set pieces look gorgeous," she describes. "The fake snow isn't an ideal setting for an everyday shoot, but it looks convincing-and the set was never cold, thankfully."

The biggest challenge was keeping a straight face around Gary Oldman, here cast as Father Solomon, a fierce wolf hunter. "Gary Oldman is the funniest actor I've worked with," says Seyfried. A big compliment, considering she's been on set with Tina Fey. But Seyfried is insistent. "At some points during filming, the things we were meant to be doing seemed so ridiculous-it was hard not to laugh constantly."

Of costar Julie Christie, who came out of intermittent retirement to play Red's feisty grandmother-in-peril, Seyfried had a chance to study the four-time Oscar nominee up close. "Julie Christie is a powerful, stunning actress. She's so alive and it radiates the set," says Seyfried.

Her role model, however, is another of Warren Beatty's paramours: Annette Bening. "She's undeniably the most appealing actor to watch," says Seyfried. "She chooses projects based on instinct and curiosity-at least it feels that way."

But like Christie, who ditched Hollywood after the gossip became overwhelming, Seyfried knows that a young actress has to be careful to find fame while protecting her privacy. There's pressure to pop up on red carpets looking gorgeous, but she's seen first-hand what happened to her Mean Girls co-star Lindsay Lohan. As her boyfriends have become more and more famous (her most recent is Ryan Phillippe, Reese Witherspoon's ex), so has her presence in the tabloids.

"I'll always be trying to keep myself a bit of a mystery." says Seyfried. "It's harder to do each year, but it's worth the trouble. Who I am shouldn't have much to do with my acting career, however the audience seems to want to know about the actors in the movies they see. I imagine there's a balance somewhere."