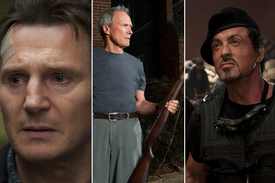 Because Liam Neeson's not-without-my-daughter thriller Taken became an unexpected hit last year, the actor returns 12 months later with Unknown, an almost equally-batshit b-movie about a way over-the-hill dude beating the crap out of people. Neeson is currently 58.  He should probably be picking out wheelchairs rather than putting adversaries in them. In honor of Neeson's latest turn, we decided to take a look at some of the finest—and not so fine—elderly ass-kickers to grace the silver screen.

Death With V: The Face of Death (Charles Bronson, 72) - This 1994 film marked Bronson's final on screen effort, a fittingly over the top finale for the series that the grizzled actor launched literally 20 years before. Bronson both receives and hands out beatdowns in the film, getting pummeled by adversary Michael Parks before sending the future star of Lost and Kill Bill Vol. 1 for a snorkeling expedition in a pool of acid.

Indiana Jones and the Kingdom of the Crystal Skull (Harrison Ford, 66) - No matter how badly you wanted to see Ford return to the fedora that helped make him an international icon, no one could have expected an adventure that would seem as dusty as this overdue fourth installment in the Indiana Jones series—even one that's about a guy digging through antiquities. Ford mostly abets himself as the title character, taking as many punches as he dishes out, but even his grizzled fortitude can't overtake the terrible absurdity of an alien space ship at the end of the film.

Righteous Kill (Al Pacino, 68) - Both Pacino and Robert De Niro were testing the tensile strength of their tough-guy bona fides in this 2008 reunion, their first since 1995's Heat and technically only the third time they worked together in their entire careers. But all of the identity-swapping notwithstanding, Pacino plays it fast and loose as a reckless would-be detective who plants evidence and frames suspects in order to secure convictions.

Gran Torino (Clint Eastwood, 79) - Not a final dance with the character of "Dirty" Harry Callahan as some expected, Gran Torino was nevertheless a return to form for an actor who made a career out of being a squinting, ass-kicking tough guy. Not only is he hilariously racist, he manages to beat the piss out of several teen and twentysomething gang members before making the supreme sacrifice so that his Hmong neighbors can live in peace.

Harry Brown (Michael Caine, 75) - It seems like Michael Caine has made every other kind of movie in his career, so it makes that he would get involved with an action film for the retirement home set. He plays the title role of a Royal Marine who decides to clean up the streets of his violent neighborhood, messing up drug dealers and pornographers in equal measures with all sorts of different weapons.

The Expendables (Sylvester Stallone, 64) - In his purported reunion/ tribute to the action stars of the 1980s, Stallone missed the mark by a significant margin and ended up casting a bunch of next-gen copies as costars rather than recruiting all of that decides' icons for a real bout of cinematic fisticuffs. But so dedicated was Stallone's commitment to staying true to his ass-kicking roots that he literally broke his neck while grappling with wrestler Steve Austin.