Swords + Sandals = So What?: A Look at the Lack of Enthusiasm for 'Gladiator' Imitators 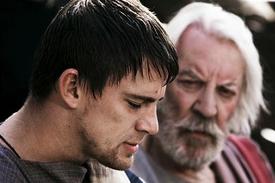 Blame Gladiator. That's the movie that single-handedly resuscitated sword and sandal films. Before then, Hollywood had more or less abandoned the genre, and for good reason: the genre stopped making money decades ago. In the 1980s, they admittedly helped make a star of Arnold Schwarzenegger, and immortalized Bubo the mechanical owl as one of the greatest (nonexistent) mythological creatures ever invented. But in 2011, when The Eagle star Channing Tatum has replaced the likes of Russell Crowe as one of the genre's leading men, it seems necessary to look back and see how such a evolution (or depending on your point of view, de-evolution) happened. We've compiled a short list of the last decade's sword-and-sandal (and maybe some sword-and-sandal-adjacent) films to see how we went from Maximus to a man best known for "stepping up" in a decidedly different kind of way.

Troy (2004) - Wolfgang Peterson (The Perfect Storm) directed this gritty but dramatically gutless chronicle of the battle between the Greeks and Trojans. Eric Bana is great as Hector (or at least the most-easily abetted of responsibility), but the film is a cautionary tale in allowing production design to overwhelm story, and it currently hovers at 55% fresh on Rotten Tomatoes.

Alexander (2004) - Oliver Stone continued his downward career trajectory with this chronicle of the life and times of Alexander, who turned out to be not that great. With the exception of a scenery-chewing Angelina Jolie, the actors mostly do a passable job, but Stone is too faithful by half to the era's bisexuality, and never quite gets a grasp on why the hell we should care about him. The film's worldwide total of $167 million was not enough to justify the massive $190 million total budget.

300 (2007) - Zack Snyder redeemed Warner Brothers' dubious pedigree with sword-and-sandal titles with this gloriously over the top adaptation of Frank Miller's graphic novel of the same name. Whether or not you read it as a much more successfully homoerotic film than Alexander or just a brilliantly-rendered, epic tale that also featured kick-ass action, it was comparatively better regarded than its predecessors (60%) criticially, but trounced them commercially, earning $456 million worldwide against its $107 million budget.

Pathfinder: Legend of the Ghost Warrior (2007) - Marcus Nispel reportedly went back and desaturated the colors of this period epic after seeing how well the look worked on Snyder's 300, but even that couldn't save this also-ran studio fare. More of a Scandinavian film than one from the traditional realm of Greek/ Roman history/ mythology, but alas its contextual originality didn't rescue it from earning an 11% fresh rating on RT, and earning $30 million (worldwide) against its $50 million total budget.

Beowulf (2007) - Despite some strong points the film didn't seem to connect with audiences as well as it could have. That said, it did provide a spectacularly hot performance from a sexy, liquid-gold version of Angelina Jolie. The worldwide cume of $196 million wasn't enough to overcome the massive total budget of $195 million.

Centurion (2010) - Even if you're not a fan of Neil Marshall's particular brand of genre-plumbing, Michael Fassbender more than carries this fun, broad and bloody story of a Roman solider trying to escape Pict pursuers. It certainly didn't hurt that the comely Olga Kurylenko played Fassbender's badass adversary, but the film never found an audience, earning only $6 million worldwide (including a depressing $123,000 in the US), and receiving an underwhelming 57% fresh rating on Rotten Tomatoes.