'The Mechanic' Star Ben Foster on the Unbearable Awesomeness of Pain 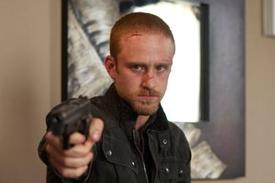 Let's be frank: Jason Statham has 50 pounds of muscle on Ben Foster, plus he could snap a guy's neck with a q-tip. But Foster—a whippet-lean method actor—was writer Richard Wenk's top pick to go mano-y-mano against the brutal Crank star as an apprentice hitman capable of killing his mentor. ("He's not what people would expect for it," says Wenk. "But he's so magnetic-he has that crazy.") Wenk's got company. Foster's frequently been cast against physical type as a psychopathic kidnapper (Hostage), a psychopathic outlaw (3:10 to Yuma) and a nihilistic small-time drug dealer (Alpha Dog). Pound for pound, he's the most frightening man in Hollywood. Besides a ruthless glint in his blue eyes, his dangerous men share an almost animalistic desperation, like a fox that would chew off its own leg just to snatch another one of the farmer's chickens. Boxoffice asks Foster about his secret to playing scary.

"I'm not a tall guy," Foster says with a smile. "That's something I say every day: I wake up and say, 'I'm not a tall man—good morning, Ben!'" But he deliberately chooses characters out to challenge the world. "The roles that I'm interested in, or have been interested in, get down to conflict. Drama is conflict, conflict of interests," he says. "You figure out what that person cares about and you care about that thing and protect it as much as you can. If somebody makes your life difficult, or the lives of the people that you care about difficult, that's taking something away from the idea of your own security and life. How are you going to defend it? How much do you care? How much do you love? The characters that I've played, some of them have a tendency toward violence internally or externally, but it gets down to: how much do you care?"

And Foster throws himself full force into fighting for his characters. "Rage is really simple stuff. It doesn't feel good," he says. "I don't go home feeling great when it's been an intense day on the set."

Especially when that day on set means trying to kill Jeff Chase, the 6'7" 285 pound former offensive tackle whose no-holds-barred brawl with Foster is The Mechanic's most memorable-and brutal-brawl. Foster's character was supposed to simply poison Chase at a bar, but decides to prove his worth by taking the giant head-on in his own apartment. "I can't reach his face," says Foster. "We worked on choreography for 12 months-because he's such a big fella, you start with a stunt man and work up to him."

On the first day of the two-day shoot, Foster insisted on being thrown into a wall (twice). "They told me not to and I did it anyway because I'm of the Jackass generation," he says. When he woke up the next morning, his body was as locked up as last night's roadkill. "That call to the producer sucks," he jokes. With heavy horse-sized injections ("a big motherfucking syringe") from the New Orleans Saints' doctor, Foster survived the day. "You can use pain as an energy," he notes. "It can be emotional, it can be physical. As the military says: pain is weakness leaving the body, and you just gotta ride it out."