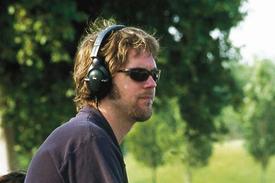 Director Brad Anderson is no stranger to things that go bump in the night. Anderson previously helmed episodes of the TV anthologies Fear Itself  and Masters of Horror, and his 2004 film The Machinist featured a frighteningly malnourished Christian Bale.

But for Vanishing on 7th Street, Anderson fully commits to the dark side. The film, available now on Video on Demand and hitting theaters Feb. 18, involves an apocalyptic world where shadowy figures have wiped out almost every living thing. The film stars Hayden Christensen, John Leguizamo and Thandie Newton as three survivors who must figure out a way to keep the darkness at bay.

What was your initial reaction when you first read the script for Vanishing—I'm guessing it's not one you can put down after a few pages?

I was just caught up in this weird reality that [Anthony Jaswinski] had created. The laws of physics are no longer operative and darkness is eating people up. It was such a great mystery. Then, the clincher for me was getting to the end and not having him give me an easy, effective explanation. It let me have this kind of existential dread the characters have in the story ... it leaves you with an uneasy feeling, like death itself.

The film uses religious symbolism as part of its post-apocalyptic feel but it doesn't drown in theology—can you discuss the part faith plays in the movie without giving too much away?

Religion is one avenue to find the explanation, the solution to what's happening. Thandie's character provides that. Each of the characters has their own explanation. John Leguizamo's character is seeking out some scientific explanation. Hayden's character is the nihilist of the group. He just wants to get the hell out of dodge and is trying to grapple with this giant catastrophe.

John Leguizamo can do drama as well as most comic actors. How did he approach the material and can you talk about ways he helped shape his character?

I thought he could bring some levity and fun to a character who's a bit wired. All those gears are all turning as he seeks an explanation. We weren't playing it for comic relief alone. He wanted to have his character believable, a working class guy and a bit of a shlub who just wants to get the girl. Then, he's confronted by this crazy disaster. He uses his well-read mind to grapple with it.

John is a fun guy. He always takes a scene and sort of plays it in an unusual way ... he‘s unpredictable.

Vanishing is available on Video on Demand before its theatrical release. Did you embrace that model, and how do you think it could impact independent films?

This company releasing it, Magnet, has that model that they're pretty successful at it. I don't know the dynamics. They seem to think with the smaller movies it builds a bit of buzz, a foundation of support among real fans out there for the film. That can hopefully trickle into the theatrical release. I don't think the Video on Demand approach eats into the box office in any way. They probably play off each other.

You jump from TV projects (Treme, Boardwalk Empire) to films (Transsiberian) and back again ... what are your thoughts on how TV fare has caught up with some of the better feature films?

I've gotten more comfortable with [television assignments]. I've done a lot in the past two years in between getting the movie gigs off the ground. When you're doing good shows it's very satisfying. A lot of television can be on par with good films. When Martin Scorsese is doing TV now you know it's getting better.

The kinds of shows I've been doing are very cinematic with movie-like set pieces. It's not just about courtrooms ... there's more meat in these episodes, more toys you can play with as a director. It keeps me engaged in the process.

Any on-set anecdotes from working with Christian Bale on The Machinist?

BA: He's a real pro, as The Machinist made evident and now with The Fighter. He's completely consumed by his roles and immerses himself in the characters. We had a great working relationship and have another project we‘re getting off the ground now by the writer of The Machinist (Scott Kosar). Concrete Island is a cool urban survival story and Christian is attached to that.