Which Sandler Are You Watching?: The Three Faces of Adam Sandler 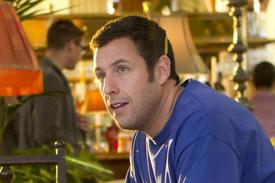 On Friday, Adam Sandler's latest movie Just Go With It arrives in theaters, offering another in the comedian's long line of schizophrenic career choices. We say "schizophrenic" not because the actor makes a lot of poor decisions commercially, but because it's often tough to tell which Adam Sandler audiences are going to see—the immature goofball chewing up scenery? The mumble-mouthed sweetheart who always wins the girl? Or the serious actor taking on a tough role?

We decided to take a look back at a few of the actor's defining roles to track all the jumping around.

Billy Madison (1995) - Sandler's leading-man breakthrough did few favors for the comedian, not only because the movie made very little sense and was kind of awful, but because he played a character that established his public persona/ performance style loud and clear: obnoxious, immature and relentlessly goofy. That said, the "I'll Tumble For Ya" scene still cracks us the hell up. Which Sandler?: Immature Goofball.

The Wedding Singer (1998) - Coming off of the surprise hit that was Happy Gilmore, Sandler transitioned into decidedly more mainstream-friendly roles with this ‘80s-tribute rom-com, which pitted him against the kind of character he might have played just a few years before in a competition for the attention of a fellow career-comebacker, Drew Barrymore. Despite a truly unfortunate mullet and more pop culture references than every episode of VH1's "I Love The ‘80s" combined, Sandler proved he could play a winning romantic lead and perhaps more importantly, a character whose primary appeal was not somehow tied to (hilariously) insane rage. Which Sandler?: Mumble-mouthed Sweetheart.

The Waterboy (1998) and Little Nicky (2000) - Taking that loveable underdog character from The Wedding Singer  in a woefully wrong direction, Sandler collaborated with longtime pal Tim Herlihy on not one but two misguided projects where the actor's primary responsibility was to mumble, be adorable and yet provide a wealth of the broadest physical comedy possible. Nicky is thankfully mostly forgotten amongst the many low points in his filmography, but Waterboy inexplicably remains a fan favorite despite the fact that it didn't hold up for five minutes after those same fans left the theater. (It certainly didn't help that Sandler had already outgrown his man-child phase, making his portrayals of such characters particularly exasperating.) Which Sandler?: Immature Goofball, since there's little that's sweet about either character.

Punch-Drunk Love (2002) - Paul Thomas Anderosn's love for Sandler was so great that he created a starring vehicle for him that transformed his "immature goofball" persona into a shockingly sympathetic character. Sandler's performance feels a little bit like a fugue state—it's as if he isn't aware he's doing real acting—but the film offers one of the most sympathetic and substantial characterizations the comedian has ever created. Which Sandler?: Serious Actor, even if he doesn't know it.

Mr. Deeds (2002) and 50 First Dates (2003) - More romantic leads for Sandler, but reflective of his transition into more serious acting in that he leaves most of the silliness to his pals and co-stars, who get to do all of the immature goofing. Unfortunately, he doesn't offer much of interest as their marginally more grown-up main character, relegating these films to the ranks of other harmless, forgettable rom-coms. Which Sandler?: Mumble-Mouthed Sweetheart, as much in his career as his characters.

Spanglish (2004) and Reign O'er Me (2007) - Taking on the complex characterizations of James L. Brooks' screenplays, not to mention the hot-button subject matter of September 11, 2001, Sandler made a concerted effort to prove that he was capable of more than just being a maniacally angry romantic lead—or maybe just demonstrate he was no longer maniacally angry. While I'm a fan of Spanglish, it's certainly not as focused as some of Brooks' earlier films, although Sandler manages to play his role as a doting husband and father pretty perfectly without becoming that mumble-mouthed sweetheart that began to get grating two or three movies before. Which Sandler?: Serious Actor.

I Now Pronounce You Chuck And Larry (2007) and Don't Mess With The Zohan (2008) - While the first of these two films is pretty much offensive just for existing at all, there's about a 10% admiration factor that goes with both of them for attempting to explore some relevant cultural issues in a comedic setting, not to mention showing Jessica Biel and Emmanuelle Chriqui in their unmentionables. But both of these films sort of came at a time in the comedian's career when audiences began to tire of him being the crazy guy—by then, the likes of Jack Black and others had taken his place—and even he didn't quite seem as committed to the sort of mania he provided effortlessly a little more than a decade before. Which Sandler?: Immature Goofball, in the body of a decidedly mature adult.

Funny People (2009) - Another film in the wheelhouse of his Spanglish work, Judd Apatow's tale of a big-time comedian coming to terms with his opulent, empty lifestyle offered Sandler a unique opportunity to throw himself into a character that at least seemed close to the real Sandler, while forcing him to confront some of his career choices. The film was ultimately met with mixed commercial success, but it at the very least appeared to exorcise (for the time being, anyway) his impulse to be that silly guy who didn't want to grow up, on screen or off. Which Sandler?: Serious Actor

Grown Ups (2010) - While this film's ironic title seem to refute the transformation Sandler made while doing Funny People, the comedian at the very least appeared to bave come to terms with the fact that he no longer could play a young, immature guy, and had to somehow acknowledge the fact that his brand of silliness had, well, gotten older, even if it hadn't actually grown up. Roundly hated by critics, the film was a huge box office hit. Audiences are clearly ready to mature with Sandler—even if it's only by baby steps. Which Sandler?: Immature Goofball, hiding in the shadow of a Serious Actor.