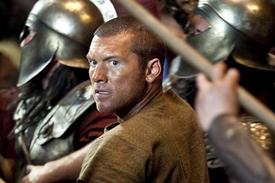 David Leslie Johnson, writer of the new werewolf-themed thriller Red Riding Hood, told Boxoffice that he felt a mix of pressure and liberation when starting work on Wrath of the Titans, the sequel to the much-maligned 2009 remake of Clash of the Titans. "It was a little bit complicated," Johnson said Thursday in an interview in Los Angeles, Calif. "There's a sequel to this movie because people watched the first one, but at the same time, there is a feeling of some aspect of dissatisfaction. So want both things—you want to take what was good that people liked about the first one, but you want to answer the criticisms as well. It's kind of a juggling act."

In addition to Wrath of the Titans and Red Riding Hood, Johnson previously wrote the uniquely-twisted thriller Orphan, starring Vera Farmiga and Peter Sarsgaard. The screenwriter indicated that his work on the forthcoming sequel would offer fans a new experience, but it would not ignore the existence of the first film. "I think it's a mistake to just say, well, we're going to ignore that movie, because there's a reason there's a 2," he said. "But at the same time, with any sequel, you want to raise the bar somehow. I think that's true of any sequel, and hopefully that's good; you don't want the same experience of watching the first one whether it's good or bad, you want a new experience that does new things."

Last week, Wrath of the Titans director Jonathan Liebesman announced that the sequel would be converted into 3D like its predecessor, although it was being conceived from the start rather than converted at the last minute. Johnson said that he left the process of dimensionalizing the action mostly up to Liebesman. "That's really Jonathan's challenge," Johnson said. "Because we just really wrote the scenes, and at the time we had no idea how it was going to be shot. So we wrote the set pieces kind of unmindful of whether they're going to be in 3D or not 3D, and then he finds the ways to utilize that. It's in his visual toolbox, and he's going to be the one to figure how visually to tell the story and utilize that aspect of it."

At the same time, Johnson admitted that he felt tempted to throw in a line or two of description where he thought a good 3D payoff might occur. "I have to say that there were a couple of times after we found out that it was in 3D that I would like just slip in a sentence like, ‘and then it flies right at the camera!'" he confessed. "I had no idea if they would use stuff like that, but once you realize they're doing it, you kind of have a little fun with it."

Wrath of the Titans is set to start shooting in the coming months. Red Riding Hood is being released nationwide on March 11, 2011.