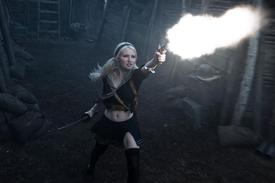 There aren't a lot of actresses who immediately conjure imagery of literally kicking ass, and that includes Emily Browning. The diminutive starlet has played oddballs and often resilient victims rather than the Lara Crofts of her contemporaries. That's why her turn in Sucker Punch is such a gratifying surprise: she takes on a variety of intimidating adversaries, and pretty much decimates everyone in her path. Boxoffice sat down with Browning at the Los Angeles press day for Sucker Punch, where the actress talked about tackling writer-director Zack Snyder's tough vision, balancing out the film's various layers of fantasy and reality, and being empowered as a woman—specifically by a project created and conceived by a man.

Because you were indoctrinated into this kind of filmmaking with Lemony Snicket, were you better-prepared to meet the demands of this movie than some of your co-stars?

I think it was only me and Jamie [Chung] and possibly Vanessa—Jamie and I definitely worked with green screen before. So I was prepared for that, but this was a really different green screen experience. I was worried about if we were going to have to fight against things that weren't actually there—is it all going to be make-believe? And it wasn't really that at all; the sets were all built, and there was just green screen surrounding the sets, and we were always fighting actual stunt men, whether they were in green suits or in costumes. So the green screen never really bothered me as much as I thought it would. There were days when we were filming the robot-train sequence where we were surrounded by green screen, and that was weird. That makes you feel nauseous, and it you feel delirious, and your eyes would adjust to the green and then you would go outside and the world would be purple. It was really bizarre. But that was only a couple of days, so it didn't affect me too much.

I know Zack designed dance numbers for all of the other actresses, but did you ever have a dance that you were meant to perform?

I think it was always important to us that this idea of Baby Doll dancing and putting everyone into a trance, it had to be so magical and so fantastic that it could really only exist in people's imaginations. It's like the briefcase in Pulp Fiction—as soon as you see it visually, it takes away from the magic of it—and I think this dance needed to be ... well, I can't dance that well, essentially. I'm not going to be able to do a dance that's going to put everybody into a trance, and I don't know if anybody could, and that's why I think it was important that you never saw it. And we never planned to see it.

Because there are all of these layers of reality, how much beyond what happens on screen was plotted out, if only for you to know on set?

There was a lot plotted out, or at least discussed. I mean, a few things were cemented, like the histories of the characters, but I think me and Zack and the other girls would talk about our opinions in terms of the story, and I think all of those things came into play building our characters. But I feel like I have an idea of what was going on in each of the worlds; for me, the asylum is reality—obviously a very heightened Zack Snyder reality where insane asylum patients wear false eyelashes - but that was reality for me. Baby Doll had been abused and put into this asylum by her stepfather, and she was there under false pretenses; she was not meant to be there. But I saw it as these other girls that were inmates that were there for maybe the right reasons or maybe not, but I feel like maybe in that first world, it was almost as if those girls were blank canvasses, and in the next world, the world of the brothel, it was Baby Doll projecting different elements of herself onto these different girls, and that became those characters. And then of course the fantasy world for me was these girls being the strongest possible versions of themselves, and fighting these crazy, fantastical dragons and zombies that kind of represented the demons in the real world that she had to deal with. It's a little convoluted but it was important for us to have that back story there, and the cool thing about the film is that if you want to go into it just to see an action film, you can, and you can be satisfied with that. But if you want to think about it on a deeper level, there are a lot of things that you're able to think about.

When there's a lot of ambiguity about whose point of view the film is coming from, do you have to adjust your performance to suit a certain perspective, or is your approach the same as with any other role?

It was important because obviously for most of the film Baby is not necessarily the narrator, but it's through her eyes, so I think it's important for that character to stay solid and for her personality traits not to shift too much between the different realities. But for me, the fact that Sweet Pea is narrating, and it's through Baby Doll's eyes sort of shows that they're almost two sides of the same coin. The way that they butt heads in the beginning of the film is like, I feel, a battle for Baby Doll within herself. And I think you really see that through the film—it messes with your perception of who is who, and I think you can even see that in the beginning when Sweet Pea is dressed as Baby Doll with the wig on, and I think that idea is very clear, the idea that they're almost like a yin and yang.

How important is it do you think that this film empower young women? And why is Zack Snyder the right person to communicate that idea?

I think it's wonderful, actually, because I think we need more male minds to be thinking that way and wishing and wanting to empower women in what is still essentially a phallocentric, patriarchal society. I think the fact that he has Debbie, his wife and producer and this just amazing woman informing a lot of his decisions and a lot of his views on women means that he's in the right position to be able to do that. But he also wanted all of our opinions on this, and he's around women enough and he understands women enough to be able to be in this place where he wants them to be empowered—and that's a really, really cool thing.