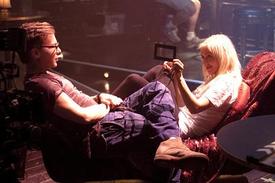 Almost everyone in Hollywood has markedly different phases in their careers, and Steven Antin is no exception. The director of Burlesque began his career as an actor, playing teen heartthrobs (often jerks) in ‘80s movies like The Goonies and The Last American Virgin, migrated into the independent filmmaking scene with his screenwriting debut, Inside Monkey Zetterland, and eventually ended up in the director's chair of a spectacle laden musical starring divas from two different generations, Cher and Christina Aguilera. Boxoffice caught up with Antin via telephone last week to talk about the evolution of his career, from those early acting days to his latest directing work in Burlesque, which is being released on DVD and Blu-ray this week.

This movie could have been like Chicago—something that doesn't necessarily take place in the real world. Why was it important to you to have a real world outside of the Burlesque club?

It had already been done in Chicago, magical realism. Chicago is definitely in the top ten best musicals ever made; certainly it's on everybody's top ten list, and it's on mine. And that had been done in Chicago, so it didn't make sense to do that again. However we thought about it, but because the Burlesque lounge was inspired by all of my experiences working with Burlesque, that was my sort of reality.

Christina is known as a musical performer and a real superstar. How tough was it to tap in the girl-next-door quality that the character needed since people know her so well as this incredible singer and performer?

Christina did a lot of work—she worked really, really hard. We talked endlessly about that girl-next-door quality and she has that innately. When you know Christina, she's from Pittsburgh originally, and she grew up obviously performing at the age of seven. She comes from a small town vibe. She didn't come from a suave, privileged environment, so she has an understanding of what that is and also really, really smart. But it was a process for both of us and she was pretty extraordinary, she had an incredible learning curve and stepped up in such a big way.

The whole movie feels like a tribute to the films and the performers that inspired you. Did you want to consciously reference certain things, or did you just digest all of your influences and all the things you love and then let them come out naturally?

Certainly the latter. For me, I really wanted it to be a throwback musical to Hollywood's Golden Age of musicals—I wanted to tell a light, fun breezy story with song and dance that would just be a joyous experience. That's really what I did. Musicals that have inspired me all become obviously a part of my references; I'm just a dictionary of information about them. Some are more obvious than others, but I think with any filmmaker you're inspired by everything you see and do it hopefully is reflected in your work one way or another.

You make the women in this film look absolutely gorgeous. How much of that was just your appreciation for the kind of sensuality that would be appropriate for that world, and how much was done strategically in order to get guys in the theater who might not otherwise watch the movie?

More than anything, it appeals to my sensibility and to my aesthetic within the context of this movie and this world. I just knew it had to be shot this way and I knew I wanted to shoot them this way, so there was no other way to shoot them as far as I was concerned. And a lot of the attention to that detail was paid, a tremendous amount; it was no accident that everybody looked so spectacular, so flawless and so beautiful. I know how to shoot women beautifully and it's a big effort. A lot of [directors of photography] and directors don't care so much, but I do. I were shooting The Hurt Locker, obviously it wouldn't have been as important, but for this movie and this world I felt like it was paramount.

How steep was your learning curve? How tough was it to apply your experience directing music videos to material that was going to be feature length?

It takes a lot of work to get that look, it really does. It took a lot of preparation and it was again no accident, with Bojan Bazelli, the [director of photography], we did test shoots, images and we did test shoots with actors, without actors. We had lighting test shoots and we shot everything so there were no surprises. We tested lenses, we tested filters, and we tested smoke diffusion levels. This was something I always wanted to do—I always wanted to shoot a movie that looked like this—so for me I knew exactly want I wanted. I knew exactly what I was doing, and I knew exactly how to get there with Bojan Bazelli, the d.p., who worked so closely with me, so it was a cool process to actually see it committed to film, this idea I that had, cinematically. The learning curve for me was about the process of filmmaking, the pacing, how that has to happen, [because] I had a very tight schedule. I had a 70 day schedule, and we shot 71 days, and that was just additional photography, but I had to stick to my schedule. As well as shooting a really staggeringly beautiful movie, I had to move at lightning speed most of the time, although that might not felt like that for everybody. We had to move very quickly.

How important was it to have different layers of music—to have original songs, then songs the girls performed to that were classics, and then songs that audiences might hear on the radio now?

Well, because it's a contemporary movie with an environment that's somewhat of a throwback, and then when they're outside the lounge, they're living in 2011. And all of the performances in the movie are organic to the environment; people don't break into song, so it was definitely a choice. But it made sense to me and everybody else involved that when you're outside the Burlesque lounge, with the exception of when I'm using music to articulate story and I'm actually intercutting inside the Burlesque lounge—sometimes I'm doing that—you have to hear contemporary music. Because again, it's today; there would be no reason that it would be a throwback. To me it just made sense logically.

How much was picking older pop songs for these actresses to lip sync to your own vicarious opportunity to direct some great classic performances or songs that you loved?

Oh, it was hugely vicarious. I always loved that song, "Guy What Takes His Time," and it's not on everybody's radar, which I loved. "But I Am A Good Girl" I think was written in the ‘70s, but I always loved that song from Crazy Horse, and I actually rewrote that song, I did the rewrite on that myself. But it's fun to reimagine music, and those songs are reimagined to have a very contemporary driving beat to them that you can probably hear. The originals have a very different sound to them. So to reimagine music and put it in a contemporary lounge that still has a throwback was really fun.

I'm a huge fan of The Last American Virgin, which is kind of amazingly good, and has that sucker-punch ending. At the time you were making it, were you aware that it was so different than the other teen comedies being made?

I really didn't. I was so young when I did it. I was a working actor, it was a job, so no I really had no idea. I can't believe people still talk about it; I don't event remember the movie. I think I saw it once as a rough cut at a screening when I was a teenager and I never saw it again. But people still stop me in airports and at the market, and it's nice, it's sweet. But I did so many things when I was young—I started acting when I was nine, so I did a lot things as an actor, and some of them I can't even remember that I did.

Are there any films or works that you did in your acting days that you either have revisited or are still connected to in anyway?

Not really. There is one movie I really like, Sandra Bernhard's Without You I'm Nothing; I loved that movie when I saw it. But not really, no—when I'm flipping through the cable or I see myself [on TV], it's like I don't recognize myself sometimes. Like, who is that person?

You have a lot of clarity now about what you were doing then, and what you're trying to do now. Did you feel as self-actualized as you do now at the time, or were you at all trying to fit into the mold of some of the characters you were playing?

I wish I could remember how I felt it about it. I just know that I was a working actor, and they were jobs. Again, I did it since I was 9 years old so I knew how to show up on a set and say the lines and try to get there as best I possible could. I never thought I was a great actor, but I think I was a competent actor. It didn't move my spirit like directing does, that's for sure.

I had my first movie made as a writer, producer 20 years ago, Inside Monkey Zetterland, that I foolishly cast myself in the lead (laughs) when I still wanted to be an actor. But everything happens when it's supposed to happen, and everything that has happened in my life up until now helped inform the job of directing this movie. It would have been a much different movie had I directed it at 10 or 15 or 8, 7, or 5 years ago. I just learned so much. I think everything happens when it's supposed to.