Vera Farmiga Gets Inside The Science Of Duncan Jones' ‘Source Code' 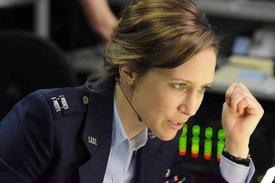 Vera Farmiga is one of the best actresses working in Hollywood today; even staring directly into the camera, such as she does in the new film Source Code, where she's talking to a character with whom she never actually interacted, she not only gives her character substance, but enhances the emotional stakes of that imaginary conversation. Boxoffice recently spoke to Farmiga at the Los Angeles press day for Source Code, where she talked about the technical and emotional challenges of playing her character, as well as the ongoing struggle to find, and then flesh out, the roles that are offered her.

How important is it for your performance to understand the science of this movie?

Probably it would have been even more important had I been playing Doctor Rutledge, who has designed the program. I don't necessarily think my character had to have a degree in it, but she has to have enough brain cells to understand the concept. And you have to remember she's got to be pretty intelligent to be in the position where she is at, and have come through a lot to get there as a woman, I think.

But when you come into a project like this that this high concept, do you have to understand it fully, or just what is required of your character?

I did ask several questions about neurobrain chemistry and science, and I don't retain that information, but [I learned] enough to be inspired somehow. The main thing about my character really to consider is that she is good at her job, this is an urgent situation, she has the authority, and time is of the essence. And even in the way the role is written, when there is something go on, she has all these graphs and charts and she understands what pertains to what.

How accurate does the film depict your actual back and forth with Jake Gyllenhaal, since you're in different locations?

There were two weeks of rehearsals where we could sit in this proximity and do the lines and look at each in the face. But that's just wrong for the roles—it wasn't even necessary, to be honest with you, because it's not the scenario. So I could have actually done without it, and maybe it was helpful and maybe it wasn't. But it wasn't comfortable to act with a camera... you spend so much time ignoring the camera as an actor that all of a sudden when you are forced to confront it, it's jarring and it feels awkward. But after two days it's fine and I had his performance to gauge and he shot his pod sequence first and I saw his playback. And as I watched Jake's performance, I wanted to see every take... so that I can gauge those little nuance moments and then incorporate them in mine. So you had to work twice as hard.

Other than it being written in the script, how do justify that she would be influenced by his appeal to her to be compassionate or to help him? Do you have to think about a deeper motivation, or does the script do the work for you?

It is in the script, and then you make those analyses, and you chart what that arc is. You chart those blips, and it's pretty apparent where they are because most of the jargon is expository and repetitive, and all of the sudden he asks me if I have been married before, so you know that's going to be a big moment in the course of this relationship. You know, soldiers getting personal can be an impediment to getting the job done. I'll use it in an example: What if you sat down to get a cup of tea with your enemy and met their loved ones, and then we are back on the battlefield? It's more difficult.

How difficult is it to find roles that you can really invest in? Do you get offered interesting stuff because you demonstrated you can play complex characters, or do you have to be particularly choosy?

It's what you're supposed to do with an actor; it's the job description—you'd better find a way to make your character compelling, even if it's not apparent. And there are handful of times... in my career where I wasn't necessarily inspired by what was on the written page. But I find it funny when people say "choice," or "your choices," all the time. Those are the offers that come my way, and there's not much choice. These are really weird times, like financial, economic times, and not many films are being made and a lot of actors are vying for limited, compelling roles. And you try to go with inspiration, [but] there are so many things that come now as a mother and as a parent and having to put a human in diapers and keep them in diapers that there so much more to consider when you take on a role. But even if I'm 85 percent compelled by a role, you figure out how to get that 15 percent to make it interesting for yourself. But you know what's so funny is that you talk to me today about this, and next week my attitude changes about choices, and how much choice there actually is. But I would say I take maybe seven out of ten roles that are offered to me.

So is it less about the roles that you either are offered than what you do with them?

Yes. I think it's rare to really find a character that lights you up and that gives you something to chew on and challenges you. So you just then figure out what to do with characters that you're less inspired by. But it's possible—and I maybe find myself doing that half the time.