Four Reasons Why We'd Welcome Charlie Sheen Back To Theaters 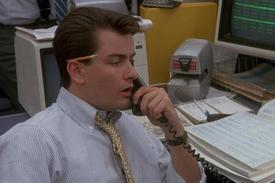 Now that Charlie Sheen has been booted from Two and a Half Men we would love to see him take on some movie roles again. Here's why:

The third installment of the Major League franchise didn't belong in the same league as its predecessors. A final chapter in the series could close things out on a better note in the same way that Rocky Balboa made up for the disaster that was Rocky V.

Imagine the possibility of Randy Quaid reprising his role as an Indians fan/hardcore heckler and then bumping into Sheen's Rick "Wild Thing" Vaughn. Priceless. Plus, we're pretty sure that Tom Berenger would be game as well. The actor recently popped up in Inception and reprising his role as team leader Jake Taylor could lead to even more work.

Just in case you forgot how funny the Major League films are:

#2: A supporting role in the new Scary Movie film would make it worth seeing.

Sheen's starring role in Scary Movie 3 helped give a boost to a promising franchise that lost steam very quickly. It was all downhill after he exited 4, but his cameo was worth the price of admission (see below). The new installment could easily be in theaters by the end of 2011/early 2012.

#3: We still think that he could do drama.

Sheen's obviously been through quite a bit over the last couple of months. Why not channel that into a new dramatic role once the dust settles? There's no need to stick to comedy. Don't forget, this is the guy who once held his own against Michael Douglas in Wall Street and helped Oliver Stone's Platoon win the Best Picture Oscar.

#4: Nobody does cameos better than Sheen.

Even if Sheen doesn't want to take on a major new film role right away he should at least do a cameo to keep the momentum going. Remember how funny his appearance in Being John Malkovich was? We do. The best moment came as a troubled Malkovich was describing to Sheen—playing himself—that the woman he's sleeping with keeps calling him "Lotte." Sheen's reaction:

"Ouch. Now that's hot. She's using you to channel some dead lesbian lover. Let me know when you're done with her. Sounds like my kind of chick."

Then there's also Sheen's pitch-perfect cameo in Wall Street: Money Never Sleeps last year. Oliver Stone managed to time the cameo perfectly and Sheen knocked it out of the park.

Our suggestion? Put him in The Expendables 2. Sheen mentioned in his interview with Piers Morgan that he bumped into Sylvester Stallone and the two talked about working together. The only question would be whether they've made movie screens strong enough to handle the presence of Stallone, Bruce Willis, Arnold Schwarzenegger and Sheen in the same film.