Robert Pattinson On Why 'Water for Elephants' Was A No-Brainer 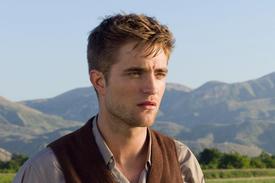 You're incredibly busy. What is it about Water for Elephants that made you decide this was the film you wanted to do next?

When I first met Francis, we met at the elephant sanctuary where Tai the elephant lived. I got along with him really, really well in the car. We arrived at this place, met the elephant and he was showing us all the tricks that it was going to do in the movie—it was such an incredible day and just the environment of being around elephants was the first major thing. I loved the idea of working on such a peaceful set because just being around them is incredibly peaceful. Also, having done so many stressful things over the previous year, when I read the script and the book and loved them both, it just felt like I could add something to it. Then it had Reese and Christoph on it and I felt like you can't really get a better cast, and that was about it. I thought it was kind of a no-brainer, really.

It's interesting to hear you talk about the animals because one scene that stands out is the first time you walk through and meet all the animals by yourself. You just seemed so comfortable in that circus environment.

There was something about where we were shooting and just the wildness the story created—there's something kind of magical about it. We were shooting out in the middle of the desert and everything was in this authentic '30s circus tent and there was hardly any kind of modern day film equipment anywhere. You could really believe that you're in the '30s. There was just something about the way the light comes through the tent. There's this real mystic quality and then there's extremely hot, tired animals, exotic animals in these period cages. There is something incredibly beautiful and strange when you see a hyena and tigers and zebras and they're all in the same room together all passed out sleeping—and a baby giraffe at the end. One thing about that scene specifically, the baby giraffe was completely clueless to the fact that there's the tiger in one cage and lion in the other cage directly opposite it. They're both staring at the giraffe during the scene and I was just trying to make the giraffe not realize what was happening and keep him looking in one direction.

That sounds like a metaphor for something, although I'm not exactly sure what.

It's funny because the giraffe wasn't born in the wild or anything so it had no idea of the threats posed about four feet away from him. I mean, everyone always talks about, "Never work with children and never work with animals," but I just found that it's always been a part of me. I enjoy working with children and animals more than adults the majority of the time because they're a constant source of inspiration because they're just doing their own thing. They don't know they're in a movie.

They're the ultimate method actors.

They're really, really, into their characters. [Laughs]

As a kid, did you want to run away with the circus?

Not really. I only went to the circus once when I was about six or something. The clowns were in this little car and the car door blew off and my sister told me that the clown had died, which is completely untrue but I thought it was true up until a year ago. I think that was one of the things that set me off from ever going to the circus again. It's funny because so many people always think the circus is creepy and then you watch Water for Elephants and it doesn't seem even like a circus, really. Some people have asked me, "Is it scary? Are there freaky clowns?" No. Why is that the first thing that comes to your head when you think about a circus? That is just very strange.

So many people are afraid of clowns. What happened to them when they were kids?

I know. It's so weird. Maybe in my generation, most people want to be miserable all the time so they're scared of someone trying to make them laugh. One of my favorite movies was It when I was younger. I kind of always liked the idea of a psycho clown.

I think I actually do blame It for a lot of that. I remember watching that when I was really young and just being terrified—especially of spiders, too.

I watched it again recently and it's really not very scary. I was terrified of it when I was younger for years.

My parents let me read that book when I was ten. I don't know what they were thinking. I wanted to ask you, this film has such an American feel to it. Since you're from London, I was wondering what you drew on to give it this great '30s frontier spirit?

I think it's always been my favorite period of America. Whenever I'm driving through the countryside in America and just see flat land going for ages and ages and tiny little towns with their little gas station and stuff. That's what my idea of America is. I never think about New York or any of the cities. That's what it seems to me. That period, that's the end of the Wild West. That energy I find really attractive. I like the idea of romanticizing America because England in the '30s, there's nothing I particularly want to romanticize. There's something about America at that point in time that seems very symbolic of hope for some reason. As soon as I saw the way Jack Fisk the production designer created the sets, and also just the days and the times of the day we chose to shoot on-we were always shooting in magic hour-it just felt incredibly American all the time and I really liked it. I don't know if you could make a modern movie feel the same. I don't what you do to make something seem really American if it was modern day. Before the '40s, people are essentially still cowboys and that's what Americans are to me. And then it became all white picket fences and something totally different. But the '30s are cool.