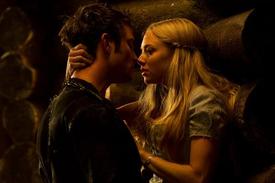 On Friday, March 11, Warner Brothers is reviving, and indeed, reimagining the classic story of Little Red Riding Hood for contemporary audiences with their new film Red Riding Hood, directed by the filmmaker responsible for Thirteen and the original Twilight, Catherine Hardwicke. But it's the film's script which gives the story new life, and David Leslie Johnson is no stranger to turning conventions upside down, as he gave creepy-kid horror movies a new twist in 2009 with Orphan. Boxoffice sat down with Johnson at the Los Angeles press day for Red Riding Hood, where the screenwriter discussed combining and streamlining werewolf mythology for a mainstream romantic fantasy-horror film, collaborating with a pedigreed director like Hardwicke, and defining where his own creative fulfillment comes when others take his scripts and translate them to the silver screen.