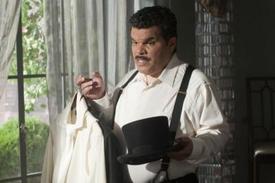 Despite (or maybe because of) the reliability of Luis Guzman to be Luis Guzman in almost every role he plays, it isn't difficult to see why filmmakers like Paul Thomas Anderon and Steven Soderbergh love working with him: he brings a sweetness, a levity, a certain odd kind of charm to characters that might otherwise be forgettable. Such is definitely case in Arthur, where he plays sidekick and enabler to Russell Brand's self-destructive title character. Boxoffice sat down with Guzman at the Los Angeles press day for Arthur, where the esteemed character actor talked about his beginnings as an actor, and the lessons he learned over the years that have made him such a game collaborator for so many other considerable talents.

You have played sidekicks before in films like Punch-Drunk Love. When you take a role like this, does the script tell you who the character is, or do you change it to suit your personality?

I think I just think about the circumstance and I apply myself to it. That's what I work at personifying on screen. Based on this character, I know there is a loyalty, I know there is a friendship, I know that I care about somebody. I know someone cares about me, so there's a certain loyalty to me too. So it lends itself to that.

Does the script itself give you that sense, or do you have to rehearse and develop that relationship with your co-star?

On this movie, we rehearsed a few times. We read a few scenes together to see what is that we were wanting to get out of them, but on the day you just kind of let go and let live and just come up with all of those creative juices, and be spontaneous - just go for it.

When you're dealing with a guy like Russell, I'm sure he throws a lot of stuff at you. How easy is it to react honestly and stay in character at the same time?

Well, you don't think about it, that's the first thing, because if you start thinking about it, then you're just trapping yourself into something that you don't want to become. So whatever just came my way, I just went with it. I know what my role is, I know what my relationship to this individual is, and that's how I live it on screen. Sure, there are times that he'll say something that I have to like really listen to or really process, but that's all done in a millisecond, you know? Because already he is moving on to something else - boom, boom, boom. And that's how you've got to do it. I think the key is not to think about it.

Have you had the opportunities you want as an actor? Do you feel like you are challenged to do enough different things each time you take on a new role?

I accept the challenge - as an artist, that's what you do. Whether you're an actor or painter or sculptor, every form of art presents a different challenge. And I look at acting as taking a canvas that's blank and putting your mark on it. And I never think about doing the same thing twice; I just never refer to anything I have [already] done in a character. With me it's just in the moment and in the time that it's taking place, what's going on in that scene and just going with your instincts. Trusting yourself—that's how I feel, that's my approach.

How did you get started in acting?

I used to street theater in New York. Like, one of my friends would write something and call me up saying, "hey Luis, can you play these seven roles?" And I'm like "Oh yeah, sure." But I never was pursuing being an actor, I was a social worker. I worked with young people in a community center on the lower east side. And one day I went out looking for a couple of kids that didn't show up to a program that I was running there, and I ran into a friend of mine I haven't seen in a few years. He said, "Oh yeah, man, I'm going up for a TV show. They're coming to New York, they're going to shoot here, they might be looking for people." He had this number, and lo and behold three weeks later, I'm costarring in the season premiere of Miami Vice. I had no clue what I was doing. What I wanted to get out of it was enough money to buy me a used car, to drive to the beach on weekends so I didn't have to take mass transit, and that's pretty much how it started for me. I had no clue what was going to transpire. I've been really fortunate, I've gotten really good material to work with in my career, great directors to work with. But I tend to stand out a lot, do stuff that is pretty memorable. I don't think that is something I do on purpose, it's something based on design and how it comes out. I think it's a tribute to how I approach my work. I love doing what I do, working with the people I work with: actors, directors, crews—traveling, meeting people, being in new environments, I take that all in. I'm just grateful, I really am.

How long did it take you to start feeling comfortable in terms of the mechanics of developing a character or being more in control of you were doing?

I think it took me somewhere between ten and fifteen years after I started in this business. I always believed that the key is never to get comfortable, because when you get comfortable you kind of lose that edge. You just try to keep it fresh, but I guess what really happened more to me was trusting what I was doing. I think that for me was-trusting yourself and saying "Oh wow!" It was never about getting comfortable, it was more about the trust. And when I got to that point, I said, "wow I really trust myself. I'm really good. I trust in myself." That just kind of helped me to take things to the next level, and the next level and the next level.

I just think it was different steps along the way. I did a movie called Q&A with Sidney Lumet; that was one of those steps. Carlito's Way was another one of those steps, and then Boogie Nights was another one of those steps, then The Limey was another one of those steps, then Traffic—it's all steps. It's like you don't develop trust in one action, it takes many actions to really develop trust, even between human beings or a pet or something like that, or even a freakin' flower. You trust that you're going to keep this flower alive because you're going to nourish it and stuff, and it gives you beautiful flowers and you've got a trust factor going on. To me that might be a bit offline, but it falls within the same line of developing trust. Like I said, it's just steps. I mean, I don't know—I did all those movies and I saw what I was doing, but I think sometimes also you trust yourself; I trust myself, like when I'm working with an new director and stuff like that, that I'm going to take care of them, they're going to take care of me. In a situation like this you're working with someone like Russell and you have a lot of scenes with him and you have to have that trust. That trust has to be there because it's going to come across on screen and the trust comes in different forms - loyalty, friendship, how you care about somebody. I hope I'm enlightening you.

How did those extended collaborations compare to the things you are doing with new filmmakers or younger filmmakers?

I think that every experience is different. Every director is different. Nowadays when I work with someone like new and stuff like that, I always say one thing. I say, "I got your back," and just establishing that kind of relationship is a good feeling to have because you know that person is going to do the same thing for you creatively, and you're going to do the same thing for that person creatively. And at the end I think you have good work on both ends, and it gives you an opportunity to teach and you also learn. I would only hope that would come from young directors too, that they teach me, because I'm always open to the fact that you could learn something new every day—about yourself, about working with people, about situations. And as long as you leave yourself opened to that type of stuff, I think that will take you further then you could ever imagine. I believe that - I'm a firm believer in that stuff.

Did you approach this at all in the context of the original film?

How do you compare working with Russell as opposed to Adam Sandler?

They're both definitely true collaborators of comedy and of the arts. It's two different universes though to me; Russell has a different brand of comedy - Russell's brand, right? (laughs) As does Adam, and they both work. It's proven. But they are just two different people.

The first time we see you in the film you're wearing a Robin costume that's a little small for you. How easy is it to have that fearlessness or that lack of self-consciousness to be able to throw yourself into moments like that?

Oh my God—it's a beautiful thing. It's a beautiful thing because you accept it for what it is. That's where all the fun comes, because it's like you're not thinking how miserable you feel wearing size small Robin outfit that barely you could get into. It's like again, "okay, oh, okay - and here we go!" And again, it's just being accepting of it, and that's what makes it so much fun, because I don't think it's something your conscious about, it's something you're living at that moment.