Jon Favreau On ‘Cowboys & Aliens:' "I Love To Take Reality And Change One Little Aspect" 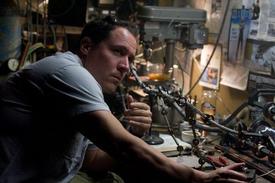 Over the past decade, Jon Favreau has methodically (if not so slowly) made himself into an embodiment of the balance between mainstream viability and niche appeal: starting with Made and then doing Elf, Zathura, and two Iron Man films, he has created a body of work that found commercial success without betraying the integrity of his projects' sometimes odd ideas. But it seems as if his latest film, even in its title, may prove to be the biggest litmus test of his talents: Cowboys & Aliens tells the tale of a small western town that finds itself threatened by extraterrestrial invaders. Boxoffice sat down with Favreau Saturday at San Francisco's Wondercon, where the filmmaker reflected on his experience making the movie, and explained how its unwieldy combination of two high concepts fed into his ongoing creative process.

The title was the original thing that drew me to it. I heard about it from [Mark] Fergus and [Hawk] Ostby when they were first hired to write it, and I heard about it on Iron Man 2 from Downey as he was considering being involved with it, and it was always a title where I thought that the best version of this movie could be awesome—what they were doing with it was intriguing to me. And to be honest with you, after Zathura and having a title that people couldn't even pronounce and never bid on from a marketing standpoint, I've grown to appreciate something that's memorable. So the beginning of the campaign for Cowboys & Aliens was saying "Here it is," and the teaser shows it—the cowboy sees the aliens, and what the hell is going to happen? I like the people involved with it, I like the people in it, what's this going to be? They will either cheer, be confused or not understand what it is, but you've made an impression. You've created a box in people's minds called Cowboys & Aliens and now what we're doing is we're filling that box with what it is.

Some people hear the title, and they expect that it's going to be a spoof. Some people hear the title and they hear what's been said about it, and they think it takes itself too seriously. But when you get to show nine minutes of it you get to see, it's movie stars who are dancing as fast as they can; they're facing circumstances that they don't know what it is. But the fun comes out of the mash-up, it comes out of the situation. It doesn't come from people making jokes that are dismissive of the stakes of the movie. And the movie has to be bad ass and it has to be fun, and if you can get those two things together, and we have the right cast to do it, and the right people behind the screen to do it, then I think we've come up with something really original and unique. In a summer that's filled with sequels and superhero movies, this might be a breath of fresh air. A nice, 2D original concept at the end of a very exciting summer of films.

Is that how you stand out in a sea of comic-book movies, brands and sequels?

I faced the opposite challenge with Iron Man 2 last time, where everybody knew, everybody got out of our way, and everybody wanted to partner with us for marketing. The real excitement the first time was the casting of Robert, the suit, and Marvel as a new studio. So we had that wave, and we had the challenges of: Is the superhero genre done? Are these B-level heroes going to make an impression? That's what we were facing, you know; is Marvel even going to be a viable studio? Is Favreau going to be the right guy to direct? It felt scarier than the second one, but you can't show footage and be received like you are here when you're showing a sequel, because they already have a set of expectations. What are you going to do differently with it?

Fortunately [with Cowboys & Aliens] we have a title that's sticky and it's an idea that people are curious about—that's been a very valuable asset to us. We're also one of the few movies that are about the cast and the stars. Typically before 3D, before big visual effects movies the stars were the point of departure for the audience, you would be paying for the stars; you'd get the stars and then you'd say, "Okay who's going to see the next movie starring this guy?" Nowadays you're having films being driven by the content, being driven by the technology used to do it, and I think this is going to feel a lot more traditional both in the way that we approach the alien genre, the Western of it, and in the way we've cast it and shot it. It's going to feel a little bit more classic, I hope, and that will help it stand out in the summer as well.

You shot this on location in both Santa Fe and in California, so when you brought production to sound stages how did you keep the energy?

Well, some of that energy was gone because we were doing rehearsals in Santa Fe beforehand and everybody came out and not everybody had their families with them and I think we got over the intimidation factor with each other, especially having Harrison Ford coming by, and us lighting a fire and everybody sitting around talking about the script and the characters, and you're not taking business calls or going out to lunches. It was like going away to camp, and making each other laugh, and me being a student of who they were as people. Because I think that the thing that has saved me, the most, has been my cast and my casting. I've always been inspired by the people I brought in, I've always been really adamant about getting the people I want, and fighting for the people that I want and having a vision for who can really bring up the film. And usually it's that casting more than any other one factor that gives the film its personality, and then allowing the depiction of that character to reflect who they are as a performer. So, getting to know them was wonderful, and when we got back it was a nice release. You know, it's a very powerful place, Santa Fe, the weather is powerful, the scenery is powerful, the altitude, so to be back in Los Angeles and being on the sound stages at Universal was a nice luxury.

Are aliens the last pure evil enemy you can come up against in a movie without having to worry about the political ramifications?

I think it's just that. I mean I think that it's fun to be able to play the enemy, I think now as well it should be that people are treated as complex and there is no "them" and "us" anymore. The world is too small. What's interesting is when you start dealing with our differences in a very intelligent way, [and] in an hour and a half movie, you really have to be careful to be responsible about how you present things. That presents a lot challenges in the comic-book movies too, where you treat people a lot differently than you did during war-time or when these characters first emerged, the world was a different place. So in order to not be anachronistic about it, and not make the wrong statement, you have to update these things in a delicate way and inevitably you're going to be violating the source material.

In a Western, I think that goes without saying as well, and I think there was an age of Westerns that were a little bit more sensitive to that. You know the Dances With Wolves moment, that moment in making Westerns -- but it lost its grittiness as well. In dealing with aliens you can create this allegorical evil presence that you have to muster up everything to fight against and show no mercy. What's fun too, is to bring the Cowboys and the Apaches together. I love to take reality and change one little aspect of it, and see how reality then shifts. That was what was fun about Iron Man, you take one little thing—let's say that this piece of technology changed and he can create this power source. Or that Tony Stark can create slightly higher than real technology, and how does that affect the real world?

As you get further from reality, it gets harder for me to bring to a project what I'm good at which is: What would it really be like for this to happen? What would it really be like in a Western to have aliens arrive? What would it really be like if a guy grew up in a Rankin-Bass Christmas special and then went to New York and his dad was James Caan? That's the fun of it to me, because that's verging more on satire, you're dealing with reality and bending one aspect of it and seeing: What statement you are making about our world by changing one little aspect of it? Being There, Big, all of those movies that I really like, Tootsie, it's bending one little thing, and the ridiculousness comes from that one little shift, but your treating reality in the same way.