'Scream 4' Co-Star Hayden Panettiere: Meeting Wes Craven Is Not What You Expect

Hayden Panettiere is no stranger to horror movie scripts. She's young, she's beautiful and she's proven her genre bona fides with her turn as the indestructible cheerleader in NBC's Heroes. But it took the Scream franchise to make her shriek on camera for the first time. The former child star talks about joining the ensemble cast for Scream 4, out April 15, as well as the perils of speaking her mind in Hollywood.

The original Scream films paid homage to horror movies while gently mocking them, too—can you talk about how the new film carries on that tradition?

It's one of those audiences that has grown and matured and gotten harder and harder to scare. You really need to take that into consideration when you're trying to make a scary movie. Those rules about who dies first and who can get killed now have changed and adapted [to the times].

You play a film geek named Kirby in the movie—did working the Comic Con circuit as part of Heroes help you shape the character in any way?

She's a very different character ... she's got that tomboy edge, that dry, sarcastic sense of humor. But she's a horror movie buff and knows all the history about them.

You've said you were hesitant about doing a horror movie, but obviously the chance to join the Scream franchise changed your mind. What was your hesitation rooted in? 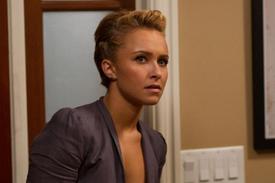 You watch horror movies now, and because of the fact that the audience has grown and matured it can really go either way. It can be amazing or really bad. Being involved with something like Heroes I got a lot of scripts for horror movies. I was dying to do a film like that sometime in my career, but I wanted to be particular about it. This has an amazingly clever reboot to Scream and has someone like [director] Wes Craven, the father of horror movies, so you can put your trust in his hands.

Craven is one of the most celebrated horror movie directors working today. Can you describe his on-set approach and why you think he's able to scare us silly?

It's very interesting meeting him for the first time. It‘s like what you would expect from Stephen King. You expect them to have a creepy quality. But I found they're never like that. He was a very sweet, kind of quiet guy and very, very funny. But you can tell he love what he does so much, and that's an incredible thing to see on set. He's done it so long, you can see it in him, the excitement layers. It comes out there and in the editing room.

What was the relationship between the veteran cast and the new crew?

You do have to go into it with a bit of respect. This is a family that has developed over all those years. Being in a film with somebody and going through that experience, it's a bonding experience. You go through ups and downs, late nights and early mornings. You see people at their best and worst.

You have to have a respect for it and find the place you fit in. They welcomed us with open arms. They made us feel welcome. We all came in as this big ensemble. It wasn't just one person being added to the cast. Wes' demeanor set the tone on the set, the vibe, how people behaved. If you have an uptight director you'll have an upset cast.

Has starring in a horror move changed your appreciation for watching horror movies? Do you view them differently now?

When you grew up always seeing the process of anything in film, not just a horror movie, you always know what's going on. I felt like I always let movies be movies and not see how they shot it. I love not trying to figure out what's coming next.

In between acting you've been a vocal advocate for marine life and other causes. What advice would you give other actors who might be considering taking a more active role in such causes?

It's the best feeling to be involved with something like that, to feel you gave back. It's a responsibility. These people I work with, they work their entire lives toward this goal. You make one comment about it and it does amazing things for the cause. It brings awareness and attention. It really pays off in the end ... even as one person you can get involved and make a difference.

It all boils down to laws and the politics of it. Getting laws changed means getting people aware.

Turning 18 and getting involved, somewhat, in politics was a shock to my system. There's a whole history you have to brush up on. And there's always those people who want to trip you up and make it seem like you don't know what you're talking about, like a puppet. That was a part that was really intimidating, and also great to be involved in that way. I had to get quickly educated.