Tyler Perry Discusses Reaching People Outside of His Base 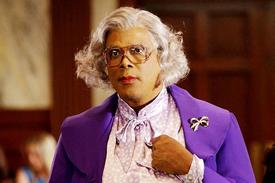 Despite infrequent interviews with mainstream press and a low roar of criticism from other filmmakers that his work panders to audiences, Tyler Perry has become one of the most successful entertainers in Hollywood. His latest film, Madea's Big Happy Family, further expands the franchise that has made him massively successful, and as if anticipating the commercial windfall he'll almost certainly encounter when it opens Friday, Perry participated in a Los Angeles press day earlier this week. Boxoffice sat down with multi-hyphenate following a spirited press conference where he said frequent critic Spike Lee can "go straight to hell," and the entertainment magnate offered a few insights on how he conceives, constructs and considers the impact of his work.

How seamless has the process been to translate your stage plays to the screen?

It was a natural progression, because it came out of the necessity of not being able to fill any more theaters. We were at capacity in every theater and arena we were playing, so to do the film version and have people still enjoy it was really great. The transition was easy, but it just opens the story up a lot more and maybe it will take it in a lot more directions and a lot of different places.

In terms of the cinematic translation, how much work does that require for you?

Well, a lot of times the play will be one thing and the movie will be something totally different; they'll bear the same title, but I'll write a whole other story because the stage show doesn't necessarily lend well to the film. So what I would do is just see where the characters were taking me, and then follow them. I don't necessarily have to have one without the other, but I think it's the title that matters the most.

One of the things that's really interesting about the movie is how judiciously Madea is used, and where she shows up. How tough is it to find the right balance of how much she should be in the movies?

It's all calculated, but being on the road for eight or nine years straight in front of an audience and knowing that I learned very early on that if I wanted something to be pretty serious, then she can't be anywhere around, because just the thought of her there would be snickering in the audience. I learned that balance through my live experiences with the audience.

Where do you find that balance—while you're writing or while you're mounting it on stage or screen?

I've naturally got it now. I know it just when I read it. I get a sense of "this is going to be okay," "this won't work," or just because of the education of being in front of the audience for all of those years.

How careful do you have to be in your conception of the female characters in your films other than Madea? You are exceptionally gifted at giving them motivations that don't excuse their behavior, but at least explain it.

One thing I know, growing up with my mother and my aunt and my sisters, I know a lot about women, and I know just [about] human beings that nobody's just mean for a reason; something happened or there's a motivation there. So I don't necessarily think I'm being careful as much as I am trying to understand the motivation of this person and how they behave. So I don't necessarily think about it being careful as much as I think about what's the answer or what really happened.

Do you tend to conceive what happened to the character first and then build her current behavior around it, or vice versa?

You know what happens? The way I write is I'll get a scene, and I'll see a scene and if she's doing something crazy in that scene, then that's what it is, or if she's doing something great in that scene, than that's what it is. And then I start to think, I know that everything has a motivation, so if it's crazy or it's great, there's a motivation, if she's too great or she's too mean—there's something going on. And then in writing it I try to find out a little more about who she is.

Do you see these films as part of a different storytelling tradition than other sorts of maybe more conventional or mainstream movies, or do you see them as part of the same continuum as the rest of Hollywood?

Well, if we're talking about the financial end of it, of course it's very different, because it's a whole different kind of thought and model and so on and so forth. But as far as storytelling, I think it's just about the story—it's just about me telling a story in a comedic format that a lot of people can relate to and understand and get. Now, as far as Hollywood goes, I don't know where it fits in because I don't necessarily feel like I fit in, in the town, so that's a pretty interesting question for me to answer.

You've talked about your experiences inspiring your stories. How important is the ethnicity of your characters and stories? Is that something you think about?

I don't because I think these are just stories that you could put anybody in. I think that if you change a word here and there, and you could have a cast where there's not one black face in it, which is like a lot of movies I've seen—not one black person in the entire movie. This isn't a movie that is a black movie, it is a movie that has black people in it. I don't think about those things.

How interested are you in courting audiences who maybe haven't already patronized your films?

When I started doing plays, my audience was 100 percent black—there was not another person of race represented. When I came off the road a year ago, the audience was 50 percent white, 50 percent black, and in some places, it was 80 percent white, in some places it was hugely Latin. So I haven't done anything—I haven't changed one thing—and the audience is coming; I was in Arizona, and five Navajo children stopped me to say how much they loved Madea. Navajo! Native Americans! It blew my mind. And I haven't done one thing to try to cross it. All I'm doing is telling my stories, and people are finding them.

Do you learn anything from writing about your experiences—from turning them into these plays and films?

It's more of a catharsis than anything. It is a release for me. Like the grief from the loss of my mother, this whole process up to this point has been about releasing and letting go and feeling better. So sure.