'Priest' Co-Star Cam Gigandet: I'm In A Tough Place In My Career 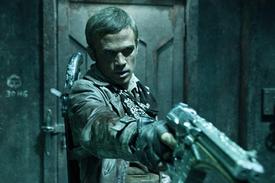 If you've even flirted with watching the first Twilight film, then you already know who Can Gigandet is: as the malevolent vampire, James, he distinguished himself by being as beautiful as he was bad ass. Since then, he's taken on a fascinating variety of roles, most recently in Steven Antin's musical, Burlesque, and another project that's coming out later this year, Priest, in which Gigandet co-stars with Paul Bettany as a young sherriff facing down a phalanx of bloodthirsty vampires. Boxoffice sat down with Gigandet in San Francisco, where he, Bettany and others from the film premiered footage from Priest and offered a few insights about what's to come.

Priest is being released in theaters nationwide on May 13, 2011.