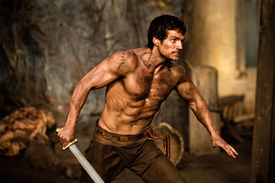 It would be easy to assume that Tarsem did all of the work making the new film Immortals as sumptuous and beautiful as its trailers and posters suggest. But that would minimize the contributions of actors like Henry Cavill and Luke Evans, who embody the gods and men who populate its mythological world (and manage to look damn good with or without their director's unerring eye for gorgeous imagery). Boxoffice sat down with Evans and Cavill on Saturday during San Francisco's Wondercon, where the actors premiered footage of Immortals to attendees, and talked about the challenges (and opportunities) of playing roles that were literally thousands of years in the making.

Immortals is being released in theaters nationwide on November 11, 2011.