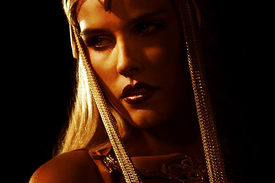 For a guy that most film fans would expect to embody the image of a reclusive, pretentious artist, Tarsem Singh is as full of surprises as his films are full of gorgeous imagery. He's gregarious, funny, and unflinchingly candid, and offered plenty of fascinating revelations when talking about his upcoming film Immortals. Meanwhile, one of his lead actresses, the former model Isabel Lucas, was herself a contradiction as well, proving surprisingly shy for a person who's put herself in the public eye via countless advertising campaigns, not to mention a featured role in Michael Bay's bombastic sequel Transformers: Revenge of the Fallen. Boxoffice sat down with Singh and Lucas in San Francisco at Wondercon, where they joined other members of the cast and crew to screen footage from Immortals, an epic new film in the vein of 300 and Clash of the Titans. Check out our exclusive video interview below:

Tags: immortals, tarsem singh, isabel lucas, 300, clash of the titans, transformers: revenge of the fallen, the cell, the fall
Print