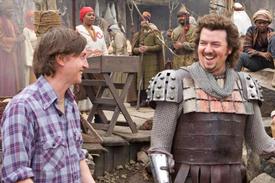 Before 2008, David Gordon Green was best known, if he was known at all, for his critically-acclaimed commercial flops, like 2004's Undertow, which won raves but earned barely $100,000 in theaters. Pineapple Express changed all that, though it was no less of a creative risk for the filmmaker: an understated stoner comedy/action-movie/buddy adventure hybrid that scored at the box office. Boxoffice sat down with Green to talk about his new flick, Your Highness, starring Danny McBride, Natalie Portman, James Franco and Zooey Deschanel, to talk about the pressures of going studio and why his fantasy adventure send-up isn't a spoof.

How tough was it to find a project that combined the commercial opportunities you earned with the success of Pineapple Express with something that genuinely challenged you creatively?

When Pineapple came out and ended up being successful, I think people looked to me and were looking to Danny and his rising career, and saying, "What do you guys want to do?" And we had this idea for ten years. We were like, "F--k yeah—if people are going to write us a check and get to go and make Your Highness finally, are you kidding me? We can't pass up that opportunity because that moment may never exist again." So it's a movie we do think defines us, to a large degree, in our ambition and our comedic taste and sensibility. We wanted it to be extraordinarily ambitious technically, with a massive scope of adventure and special effects and a love story, and we wanted to infuse it with everything that we love going to the movies with to see. So with that, and the trust of Universal, somehow this has happened. If you had told me ten years ago that it was actually going to happen, I would have told you that you're f--king bonkers.

How tough was it to marry a deconstruction of these adventure films with something that felt genuinely epic?

I don't think it's a spoof—I certainly didn't approach it as such. And I don't think it's a satire of these movies. I think in our goal and our estimations and certainly in our approach to the movie, we approached this sincerely to make a movie like Krull and Beastmaster and Conan the Barbarian and Dragonslayer and The Sword and the Sorcerer. These movies were so influential in our childhood and inciting so much of the creative impulse that drives us to this day that we wanted to not make fun of those movies, because in a weird way they're having fun themselves. So why don't we just have the situations be funny enough where we can make it a really funny version of these movies? So this is not Robin Hood: Men in Tights, and it's not spoofing; you don't have to be familiar with any of the movies or our reference points for the movie to work, and in fact it's probably helpful if not, so it's not distracting. So hopefully this movie stands alone as a quest film, as an adventure movie, as a sword and sorcery movie, and just provides a lot more laugh than you expect. Hopefully it keeps that in the foreground, that kind of entertaining element of it, while the background is kicking some ass.

What ideas did you get from those earlier films that you particularly wanted to tweak and make your own?

The Wise Wizard was an originally designed unique creature, but inspired by puppets that we loved, from Yoda to The Dark Crystal, and the use of having a puppet was something that we were really adamant about in the movie. The mechanical bird is obviously a nod to the original Clash of the Titans, two moons is a nod to Krull, someone being kidnapped from a wedding happens in Krull, so you could say we got that from there. There certainly a lot of aesthetic elements from Fire & Ice, the animated film, as well as having that being inspiring to Steve Jablonsky, who was doing the score and we had him check out some of that.

How do you combine drama and comedy to ensure there's the right balance?

It's pretty intuitive because I think a lot of sad things are funny, and a lot of funny things are sad. I really like anything that's a bit of a curveball that feels creative and not just the tried and true traditional; I like things that push the envelope and show me something new. I think a lot of people just want to go see what's familiar, but I'm certainly not one of those as a movie buff. And I don't really take an audience's perception of my own profession or my own career to heart; I do look to my buddies and collaborators that are the only people that I trust. People talk about one movie for me and one for them, but I just always want to make movies for me. I'm just selfish—it takes too long to make a movie, and if you were doing one for them, it would be like f--king clocking in on a terrible day job, and I can't do that.

How difficult is it to infuse these studio films with your personality?

The honest answer is that I have had more freedom and independence on these last two movies—three movies, I'm finishing up a third studio movie right now—than I ever had on an independent movie. The constraints and limitations are always going to be there if you're not writing the check yourself; there's always going to be someone looking at you, asking you why you're doing something. But in these two instances, or these three now, people have been very supportive and I think a lot of it comes from the fact that they're comedies. My sense of humor seems to have some commercial appeal to it, whereas my sense of drama can be really emotionally satisfying for a few people, but they haven't been broad, break-out commercial successes. So I think people are a lot more willing to write a big check for me to do a big comedy because they know I can get away with the absurd and obscure. On Pineapple Express, for example, it was like, "As long as the movie cost less that $25 million and has a lot of weed in it, we as a studio know we'll make our money back. So it's a safe bet—go be free." And that was awesome. And then the challenge becomes, "How do I make this full-on batshit nuts with some action, like The Blues Brothers, like Gravy Train, like Tango & Cash, movies that I really want to have nods to—how do I make this as a great buddy adventure movie? That was difficult for the budget, shooting in Los Angeles and things like that, and for this movie too, but it's just always a goal of mine to put bang for our buck in responsible financial filmmaking.

Do you have ideas that demand larger budgets than you've had thus far?

It all depends. I just want to make responsible movies so that I don't have that pressure, because I think the second the studio starts getting involved collectively, executively, corporately, is when you're not being responsible. It's when you are going over budget, you're going over schedule, and you're not delivering what you promise. So I tend to be very clear with people, and also do a lot of homework myself and see what the true value of it is. Like right now I'm trying to develop a horror film [Suspiria] and my goal is to do it with all unknowns and not have famous people in it, because sometimes that can be distracting in the wrong film. So I've got to find with the themes of the movie, and the genre of the movie, a budget that makes sense so that nobody bothers me and nobody says, you're being irresponsible and we've got to breathe down your neck and you've got to cast a famous person in this cast so we can hang our marketing hat on it. And luckily with horror movies, there's just a great trend of being able to get away with that-horror movies can make a lot of money and not cost a lot of cash and not need to have a superstar to hang your hat on.

This is your second big stoner movie. How careful do you have to be to take on different challenges so you don't get tied to one genre?

After Your Highness I was going to go make Suspiria, and then I got to a point where I didn't want to travel. I'd been in Northern Ireland for a year and a half, I wanted to go visit my friends in New York that I was losing touch with. And I wanted to do a character piece that didn't have any visual effects in it, and I wanted to work with kids—I love working with kids because they're fun, fresh, and they don't bring a lot of the pretension that a lot of adult actors can. So I was thinking, I want to make a dramatic movie in New York with kids—a character piece. And then the f--king script for The Sitter showed up, and it was really funny—it was engaging and it had incredible performances and roles for kids. And I was like, I think this kind of breaks the rules that I was setting to kind of challenge myself, but it also fits three really important bills and it would be a ton of fun—it was a really strong script and I think we made something pretty cool out of it, pretty unique. So I never say never anymore because I've said that before, and I've gotten shot down for it, and now I do have more of a substantial itch in a long-form feature film to explore something. Like I'm going to go do a comedic pilot for a TV series, and then I'm going to do Eastbound and Down this summer, which is all I need to do to exercise comedically, because it also balances drama and genuine performances, and then I have an animated TV series starting this fall on MTV, so I have plenty of comedy being exercised every day and it's important to me to try to exercise something that's got a little bit more testicle to it.