Hilary Duff On Chasing The Career She Wants: “I Get Told No All The Time” 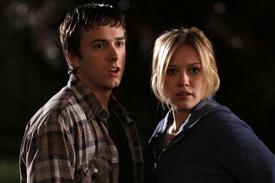 Although she's best known for balancing a pop career with her precocious television character, Lizzie McGuire, Hilary Duff is determined to redefine herself as an adult actress, even lampooning her public image with her bold turn as aggressive Middle Eastern superstar Yonica Babyyeah in the satire War, Inc. In Bloodworth, Duff plays another ballsy role as Raven Lee Halfacre, a smart, slightly cynical Southern girl who dreams of escaping small-town life after she meets Fleming (Reece Thompson), a teenager tackling his own family's troubled legacy. (Or as Duff describes her, a "white trash girl living in a brothel with her mom who gets pregnant by her boyfriend's uncle-that's pretty interesting.") Boxoffice sat down with Duff last Monday at the Los Angeles press day for Bloodworth, which also stars Val Kilmer and Kris Kristofferson, where the bright and motivated young actress opened up about the challenges of changing her image after being a Disney Channel princess.