Jodie Foster on 'The Beaver:' Mel Gibson Isn't Anything Like His Character 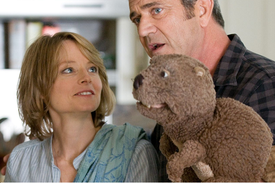 Following Mel Gibson's very public meltdown last year, it looked like The Beaver might never see the light of day—at least not without the imprint of its star's behavior overshadowing its own accomplishments. But less than a year later, Jodie Foster feels confident her latest directorial effort is getting a fair shake as it is set to arrive in theaters on May 6. "I feel like now is the right time," Foster said recently. "I feel good. I feel like the film's getting a fair shake, and I'm not sure it would have."

Boxoffice joined Movieline for a joint interview last week with Foster for The Beaver, where the actress-turned filmmaker spoke candidly about what happened in the days following the news of Gibson's scandal. "That was the great effect, really—how were we going to sell it," she confessed. "It wasn't what we did with the movie, and we didn't change one frame of the film. We would never change one frame of the film. It was just about, now how do we sell it, and how do we get it out there, how do we get people to want to see it? So we had three different release dates that were all changed - and, I think, for the best. I think they made the right decision."

Additionally, Foster explored the process of putting this unusual film together, and reflected on the challenges of staying creative in a culture that seems to thrive on sensationalism.

How tough was it to figure out as a storyteller how to introduce this conceit, because you almost have to do it in a nonchalant way so that it doesn't become...

A big, broad comedy. Exactly. Well, you know, you have to want to avoid that, which I did. And I like the fact that it's almost an overly simplistic high-concept conceit that's sort of the introduction to a fable. And you see that as something that's going to be light, and spirited, which it is—light and spirited in the beginning—but little by little you start seeing the psychology that brought it about. And that it gets darker and darker as he gets darker and darker. I like the combination of those two things. I like the wittiness, and I like the kind of psychological detail.

How hard was it to juggle the idea that he might be right in his attitude towards the whole thing, that it's therapeutic to him—and then there's a shift? How did you achieve a sense of justification for each point of view?

I think that's what you do. I mean, that's my style as a director; I kind of put myself behind the eyes of every single one of the characters and then I say, ‘What's his point of view?' ‘What does he think and why does he think that?' So I don't tend to have those big archetypes, like the big bad guy. The speech that he gives to The Today Show, the "crazy" speech, I think is a really elegant point of view in the movie, which is, ‘Let me tell you what crazy is—crazy is waking up every single day of your life and wanting to go back to bed. Or no longer thinking anything's funny anymore. Who wants to live like that? I don't want to live like that.' This idea that he wants to change and wants to transform himself. That beforehand he thought he had two choices: Either a life sentence or a death sentence. And through using this survival tool he realizes that he can be vital and that life can be so much more than that. Why would you want to give up the thing that gave you the vitality? Yeah, it all makes sense to me.

Right. That was hard. I think it's always hard when you have two stories because one is always inherently more interesting than the other. And you're like, when do I cut back to the other story and how much time do I give it? I have to inject it with a little bit more plot because this one has this big, bold point of view and this one is a little bit like a rite of passage movie. Yeah, there was a lot of balancing that but that was done mostly, I think, in the writing and rewriting process.

How much do you find Mel to be either like this character or like other characters he's played in other movies? He's played these sort of mercurial, manic kinds of characters—do you feel he's the kind of actor who exorcises a lot of that in his characters, or that his characters are some reflection of his actual off-screen personality?

Some of both. It's, ‘What are you interested in?' And that's why you pick that film. What energy you bring to the character and how well-cast you are. Robert Downey's kind of like that too, I think. But in this case if you really think about who Walter is, because Walter doesn't talk much—there are only about ten lines of dialogue by Walter—Mel isn't anything like Walter. Walter can barely utter a sentence, he's soft spoken, not confident. He doesn't believe that he can be loved, you know? He doesn't believe he's worthy. And that state of who Walter is is that he's so ashamed of himself that he can't even go back. Obviously that's nothing like the Mel we know. In terms of the manic-ness, it's about a character going through manic-depression, so there will be a manic phase. But if you really look at the Beaver, the Beaver's not like Mel at all, either. The Beaver is like, straight ahead, confident, can dissect emotions but is not particularly emotional, blue-collar... I don't know if Mel is like that, either. It is true that he brings his own energy to it but I don't know that he's like any of the characters.

What was the rehearsal process like? Not just to be able to distinguish the two personalities in his performance, but also for him to give a performance that isn't just going to be laughed at by the audience—not comical, but so that there is a resonance with the audience?

You work on the script and you talk about it. That's pretty much all you do. We were conscious of that, at this stage in the script we want to be doing this, this scene's coming too early, we need to cut all this out and take this other part of the energy and bring it to this other place. You kind of do script work with the other actors. There were some scenes that weren't well defined towards the end, so we kind of did some improv work just to drum up ideas to give to the writer, but mostly it's just talking, and then blocking. I like to plan; some directors walk, they don't plan - ‘Let's just see what the actors do on the day, and we'll decide all the shots from there.' I can't wait that long. There are too many question marks, things that people need to know, and I like to have thought about the look of the movie. So I plan everything; I change the plan if it doesn't work for the actors. But there are certain things that we need to block out just so that everyone's OK with it.

Does that make it easier for you to compartmentalize the acting vs. directing responsibilities that you have?

You know, they're kind of one and the same. I guess I am a compartmentalizer so I guess I don't have a problem with that, but it's easier for me to make decisions upfront so that I'm not forced with having to make a hundred thousand decisions all in one second.

Being that you had this close friendship with Mel for years and had acted opposite him before, how did you approach your two responsibilities when the news of Mel's tapes came out?

We weren't working then; we'd finished shooting. Well, there was an overlap of one day, which was a reshoot day, but other than that we had long finished the film so there wasn't any of that vibe distraction through the shoot. It was really mostly in post.

Did you feel like you had to go into crisis mode when it did happen?

Yeah, me and the distributors. That was the great effect, really—how were we going to sell it? It wasn't what we did with the movie, and we didn't change one frame of the film. We would never change one frame of the film. It was just about, now how do we sell it, and how do we get it out there, how do we get people to want to see it? So we had three different release dates that were all changed—and, I think, for the best. I think they made the right decision. I feel like now is the right time. I feel good. I feel like the film's getting a fair shake, and I'm not sure it would have.

Were you nervous at your SXSW premiere?

Yes, very! It was really the first time that any real audiences had seen the film. They had a few friendly journalist screenings just to gauge how they felt, but we couldn't do any kind of previews or anything so nobody had seen the film but friends and family.

How hard is it to maintain your creativity, as an ongoing process as a filmmaker, when there is this sort of intense media scrutiny?

Well the good news is the movie was done. And there's no reason to ever give an interview unless you're releasing a movie. So there wasn't really anybody I had to talk to about it. I mean, obviously it isn't the easiest circumstance; you spend two years working on a movie and then something happens and it throws everything into the air. But I got to make a movie, and I know how hard it is to get movies off the ground, especially personal films. And that's such a gift, it's such a reward in itself. I know it sounds cliché but I'm not that invested in the afterlife of the movie. In a way, I got to make the movie that I love, that I feel proud of, and I think that's where my investment stops.

Having gone through the process of figuring out how to make sure that this movie gets seen fairly, what have you learned is the best way to get in front of that kind of controversy to make sure the attention stays on the movie itself?

I don't know how. [Laughs] I really don't! You just talk about the movie, but it is a question, and a good question for you: Can you separate out private information that you happen to know publicly, about somebody that in any other walk of life you would never know except for that he's a celebrity? I mean, can you separate that out from somebody's work? I don't know. Honestly, I don't really know what the answer is. I guess we'll see, right? [Smiles] What I do know is that once people do see the film, no matter how they felt about him—because sometimes we force journalists or whoever who have to cover the story and they don't want to be there, but they have to be there anyway - we actually have people in the theater that don't want to be there. And consistently, pretty much 95 percent of the time, when they come out of the theater there isn't one person that doesn't say, ‘Wow, this is an extraordinary performance and I'm glad that I was forced to see this!'