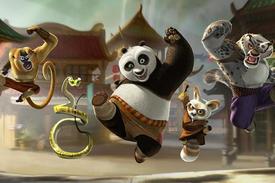 Make a cartoon about a martial arts-fighting panda? Some studios would be fine with just a bear who could throw a punch. But DreamWorks wants every hit to snap and sting and be factually, physically accurate-only, how do you do that when your ursine fighter has a belly bigger than his stubby arms? (And seriously, how do you do it when his partner is a snake?) Kung Fu Panda 2 director Jennifer Yuh Nelson and head animator and kung fu fighter Rodolphe Guenoden tell Boxoffice about choreography aggro bear versus wolf battles and and give us the scoop on the unexpected—and dare I say, girly—inspiration behind new villain Lord Shen, voiced by Gary Oldman. Fight on.

I heard that when Dreamworks was creating the first Kung Fu Panda, everyone on the animating team had to take kung fu lessons to learn how to move their shoulders and hips.

Rudolph: True. We did lessons just to understand the mechanics of how it works. Particularly for the basics—we didn't go too far with it, but just so everyone understands what it takes, how to put their feet. We did that once a week for about an hour.

Jennifer: We did a larger lesson for the rest of the crew, as well, a big group thing to show everybody how hard it was.

Jennifer, Jeffrey Katzenberg introduced you by saying that you had a kung fu background.

Rudolph, you're an animator who's been doing kung fu for 20 years—a rare combination.

R: I'm still not an expert, I'm an aficionado. I've been practicing marital arts for 20 years, but I'm no expert. I just love practicing and thinking about it and drawing it.

J: And he does a great job animating it with a great deal of accuracy. He gives it a certain level of real world accuracy. People who do martial arts in real life, they've talked about how happy they are that we didn't fudge it—even though we're doing martial arts for animals. It's not a reality piece, but it is authentic—we've tried very hard to get that realism.

The first time I saw Kung Fu Panda, I just assumed the animals were from the Chinese astrological calendar. And then I realized that actually each animal represents a different style of kung fu.

R: That's right, kung fu has different forms: tiger, monkey, mantis. Of course, we had to take liberties because they don't have the same bodies as humans and the styles we were insired by were very human-based. They're from animals, but they're all practiced by humans. In our case, we decided to take a few liberties to make full use of the animals' abilities: Crane's wings or Tigress' agility, things like that. We didn't stick too much to the forms, we just hinted at it and implied at what makes it so good. Like Mantis has four legs, and Mantis-style on a human, there's only two legs.

And then you have Viper, who has no legs at all.

R: Viper, we tried to mimic the human form with the snake stance just by the shape and silloheuete. But of course, she's just a long stick. [laughs.]

Jennifer, you came up to direct through the story department in the first Kung Fu Panda film, so you've both been working together for years. What's that process like when you sit down and work through an animated scene?

J: We've been on this for how many years—

J: [laughs] Take an action sequence. We don't believe in action for action's sake. It all has to come from character and story. What do the emotions do, what does the storyline do? That's the core of the sequence, so we sit down and figure that out first. That's how we really try to make each action sequence different because each one is dong a different thing. Like for example, the rickshaw chase. That one started off with: Okay, we have this story point that we have to hit. So the story crew got together in a room with a big white board and said, "All right. What are all the funny things that could happen in a rickshaw chase?" And we just brainstormed. We spent several hours just coming up with all of these random ideas-no matter how crazy it is, every idea is fine. And then we sit down and decide which of these ideas are the most interesting. And off of everyone's great ideas, onthat particualr sequence I went back and did the storyboards to make sure it all flowed together as one idea—one person really has to get that together that to get the pace right—and then we handed it off to Rudolph to make sure that it looks very authentic.

R: On this film, there were some scenes where I would animate in 2D, or on paper like we used to do. Some others, I would just do thumbnails of all the moves with descriptions underneath explaining how many frames to get there and what kind of punch the character does to the animators, and then following them closely through all the stages.

J: One thing that Rudolph does that you don't usually get to see is his schematics, what he gives the animators to work off of. You just see these pages and pages of beautiful posing and forms that are basically the key moments of the action so we can make sure we get every pose right in this frenetic action. And unless you're looking very, very carefully you won't catch them all.

But if you paused it, you could say, "Ah yes. The shoulders are straight, the elbows are angular—good form."

J: We slow it down and stare at it a lot so other people don't have to.

Did adding 3D to this sequel affect the way you styled the action sequences?

J: It did. Basically, storytelling and moviemaking, the basic tools of making a film, this is just one more step in it. What it made us do was think of the dimensional space of these action scenes more. We tend to make things very dynamic in composition anyway because it's a kung fu comedy. We didn't have to change too much in order to do the 3D, but it just enhances what we can do, especially since a lot of the kung fu is airborne: people flying through space, people doing these incredibly big jumps and leaps and kicks—all that is really enhanced.

In the very first fight scene in Kung Fu Panda 2, the team fights so differently than they did in the original: they're more aware of where their other friends are—they work together on the attack.

R: That was a story point that Jen really wanted on that sequence. We're meeting Po again and he's living his dream as part of the team so it has to be clear visually that they're all fused together. We have to find Po not being Bruce Lee—still being Po—but advanced in his training. He's still heavily breathing when he does things and he's very aware he's not as cool as Tigress, but it was a great challenge to make them work together. One of the scenes I had a pleasure to animate was when Po is strking the wolf. People who are aware of kung fu and the origins and the animal forms could see that Tigress does a Tiger move from the original stances, Monkey does a monkey form. But Po does some of the moves that are true to their art forms. Some people will notice it, most won't, but it was super cool.

J: People really do need to slow down and freeze frame through that scene because it goes fast.

You were talking about Viper being difficult to animate as a fighter because she has no arms or legs. But Po seems like he'd be as difficult because his arms and legs are short compared to his stomach.

R: Absolutely—that was a challenge. [laughs]

J: But that's almost why he looks as appealing as he does. It was a design point to make sure that he didn't look too human. If we lengthened his limbs too much, he looked like a guy in a suit. And you really never saw Po as being a guy: he doesn't move that way, he doesn't fight that way, he doesn't stand that way. He's a panda.

Have any parents told you that after the first Kung Fu Panda, their kids came up to them and said they wanted to learn kung fu?

J: But I think there have been. There's been a lot of enthusiasm among kids generally and just judging by the fact that when you came out of the theater after the first one, the kids were all doing kung fu in the lobby—that says something.

When you were designing the first one, did the style of martial arts for each character influence their personality? That some were more defensive, some more offensive.

J: It did when we were developing the character personalities. We were looking at both what animal they were and what purpose they served in the story. Tigress, for example, she's very, very—what would you say?

J: And strong. That's very tiger-style. Very aggressive. And so her personality had to go along with that style and support it, unlike Crane where crane-style is more defensive, more deflecting. He would not be the hothead of the group.

R: But we got to make use of his great wings. We didn't want to have his wings form fists. We wanted his wings to be wings, to be what they are, so for him, he moves in a more fluid way rather than striking. That's one of the things I enjoyed as well is finding a new style for the villain [the evil white peacock Lord Shen, voiced by Gary Oldman]. I really wanted to make him unpredictable and graceful, but still very strong. And he relies a lot on weapons. In the Beijing Olympics a few years back, I was watching the rhythmic gymnastics and I thought, "Oh, man! That's so cool! That would make a character really creepy if he moved that way with his weapons!" So I took a lot of of references and tried to mix traditional Wu Shen forms with swords and rhythmic gymnastics to make him very agile and flexible and creepy and unpredictable—and lethal, of course.

I love the way his tail opens and shuts when he spins.

J: He moves so unlike anybody, it's really cool.

There's that moment when Shen walks into a palace and you just focus on his feet, which are plated in metal. You hear these clinks as he steps and it feels like a western.

J: His metal feet! So cool. If you ever get a chance to look at them up close in freeze frame, they're really beautiful. I would love to see those in real life.

It seems significant that Shen, the film's enemy, relies mainly on cannons. In the kung fu world, that feels like cheating.

J: Part of marital arts that people don't think too much about, but it's definitely there, is the spiritual side. Not necessarily religion, but the discipline, the physical energy and the honor and the intangibles. A lot of the things Shen has with the tricks that he uses, the weapons, is they're not based on honor—they're not based on deep discipline and energy-based things that kung fu tries to hone.

The spirit of kung fu seems like it plays a larger role in the sequel. Po's journey is a lot about finding his inner calm.