Laz Alonso On ‘Jumping The Broom:’ “Let’s Try A Good Guy For A Change” 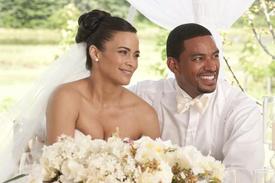 Prior to his turn in Jumping the Broom, Laz Alonso has often played the guy in movies that you love to hate: Zeke, the formidable frat-house patriarch in Stomp the Yard, Fenix Rise, Vin Diesel's adversary in Fast & Furious, and Tsu'Tey, the stone-faced warrior who reluctantly accepts Sam Worthington's character into the Na'vi community in Avatar. But as Jason Taylor, a husband-to-be trying to broken peace between his family and his fiance's, the actor hopes to find some future opportunities where audiences just plain love him. Boxoffice sat down with Alonso at the Los Angeles press day for Jumping the Broom, where he candidly discussed not only the challenges of bringing this character to life, but choosing characters that take his career into new territory.

I can only imagine you've fielded offers to do a number of films like this one. What made Jumping the Broom the one you actually wanted to do?

Well, I'll tell you. First and foremost, before I did this film, I turned down a lot of movies that wanted me to play things that I've played in the past—a scumbag, cheating husband, you know? (laughs). It got worse and worse; it was all kinds of [stuff]—child molester and things like that—and I just felt like it was time in my career to stretch and to show people a different character, a different thing. They've seen me do the bad-guy thing, and I can do that well, so let's try a good guy for a change. This was an effort that my team and the agents, everybody was on the same page, and it's funny—when you decide to start saying no, that's when you get all of the offers. People don't even want to see you audition; I mean, they're throwing money at you. And it takes discipline—I'm not going to lie. When you're sitting at home twiddling your thumbs, there is some faith that takes place that you have to be able to tap into and say, I'm waiting for a reason, it's going to come, just hold off a little longer. And that's what happened when Jumping the Broom came around. I had decided that it was finally time to make that leap of faith into the next level of my career, and it's probably going to take me saying no to other things.

So when I got this script and I read it, not only was it what I was looking for as far as ‘the guy that gets the girl,' but also, the guy, the character, Jason Taylor, was raised by a single mom and so was I; that's a story that I always wanted to tell. He grew up not with a lot of money but he's pulled himself up by his bootstraps, very similar to my experience, went to Howard University, lost his father at an early age, went to Wall Street; these are all parallels that I can say from my own experience that I've done. So it was just one of those moments where you just feel like, okay, there's something else going on here—this is beyond the typical script that comes across your desk and you mark up with red ink. This might be really meant for me. So when I went into the audition process, and I had to audition, because that's another thing that happens in this town—when they see you play one things too many times, they don't think you can do anything else, and my reel, while I was good at killing humans in Avatar and fighting Vin Diesel, they want to make sure I can be sweet to Paula Patton. So I went in, in a very traditional sense, and I auditioned; this wasn't just handed to me. And I'm happy to say that they were able to see me playing the role, and they told me that after the audition they felt like it was mine - that I had it. So I'm very happy with the end result of this film, and I'm glad that I waited.

Because audiences don't see the five months leading up to the wedding, what did you see as the foundation for the chemistry between these two characters?

In the film, if you remember, there are moments where if she starts hyperventilating and getting really worked up, I tell her to breathe. There's another set of things—the whole "pinky swear" thing, it's kind of like our little thing. She's always asking me to pinky swear, and there's a moment where I apologize to her and I extend the pinky swear—and normally I don't even want to pinky swear. But these are things that Paula and I created because we didn't have the luxury of showing the previous five months. So we had to very quickly and with very tiny anecdotes show the audience that this was a real couple that has had the time to fall in love, and outside of not having had sex, they still have the things that every other couple has - the nicknames, the "isms," our own little language that we created as a couple.

In so many of these family-clash movies, there's a tacit acceptance of inappropriate behavior, but in Jumping the Broom, people get called out for behaving badly. What sorts of opportunities were there to step outside the character and ask, is this what I would really do? Or how much did the script do that for you?

The script was a skeleton, and Salim really trusted his actors to put the meat and bones on that skeleton. There was a scene in particular with Loretta [Devine] and myself when I come back in the kitchen and I call her out for having told Sabrina that personal stuff, and I didn't want to play it that way; I wanted to take Loretta outside and have a one-on-one moment with her, because I didn't feel right yelling at my mom in front of a bunch of strangers, some of which weren't even members of our family. But Salim felt that it was very, very important for us to see at that point in my character's journey that he no longer cared. He said, "if you take your mother outside, you are giving her the respect and the reverence that you have always given her, and this has to be a key moment where he throws all of that out the window. She's wrong, she needs to hear it, and he doesn't care who hears it."

And that's one of those moments where I had to discard what I probably would have done in my real life, because in my real life, I would have still taken my mom outside, or on the phone, or in an email, and told her she was wrong, but not embarrassed her in front of the group. And in the story, Jason did it differently, but I do feel that it does show a very, a, vulnerable place that he's at, but b, it's just very genuine and sincere. He's calling his mother out. And like you said, you don't see that in a lot of other films. But you felt it, the realness of the moment, because it happens in real life.

Because this is a movie that's so much about where we come from and how our families shape us, how much inspiration did you take from the performances of other actors whom you were supposed to have been raised by or spent your life with?

I think that one thing that you see is the interaction between Tasha Smith's character and Loretta and also Mike Epps' character and Loretta, and one thing that I relied on heavily as a character when I was playing it was them being a buffer. You see it in the end result and I don't know if you necessarily see how much I relied on them, but on the day when we were shooting, there were a lot of moments where my mom is doing her, being her, and I'm looking to Tasha's character for support or I'm looking to Mike's character for support, because they were her voice of reason. So I feel like more than anything, this is really, truly a team sport, and when you have everybody working at their highest level—which, with this cast, everybody just did inherently—those moments organically happen.

At times they were in the script, and I don't want to take anything away from Elizabeth Hunter, because she's a brilliant writer, but there are a lot of moments that were not written, but just because everybody is living in that moment, I might throw a look to Tasha, and she [would say] "okay, so, we'll just go over here," and that made the scene. When the scene may have been how uncomfortable I felt, now it's a three-person scene, because Tasha helped me out and boom, she comes in and saves the day. And I think that really showed the connection between my character and these other two characters, Mike Epps' character and Tasha's character, where we may not have had a lot of interaction, but you still felt how important they were to my family.

Your character seems the most well-adjusted and self-possessed of all of those in the ensemble. But do you think about what lesson he learns through the course of the story or what journey he goes on when you're preparing for a role, or is it more important to be present in each scene and not worry about the larger journey?

I think it's a little bit of both, but in reverse order. I do go through the script and look at my character's beginning, middle and end as it is in the script, but when you start doing scenes, one improvisation or one moment that might change—and directors always have changes—could change what that middle is. You know, the beginning is usually the same, and the end is usually the same, but you've got all of this space in between that will either shift the arc this way or that way—he could arc earlier or arc later—and that's the area that you have to remain really open in, and fluid, and move with the story. Because that honestly is where you're really going to find those moments—the growth, so to speak. I do look for the beginning, middle and end, and I do have a road map, but as we move along the way, I'm open to other characters or the director himself shifting that arc in different places.