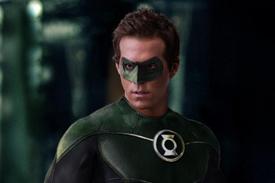 As any internet dweller or comic-book-movie patron knows, Ryan Reynolds has been on the verge of playing a variety of iconic characters—Deadpool and The Flash being just two of them. But with Green Lantern, Reynolds finally graduates to the big leagues, finding a lead role in an adaptation and fleshing out one of comicdom's most celebrated superheroes. Boxoffice visited the New Orleans set of Green Lantern last year, where the actor took a break from shooting to talk to journalists about the process of not just picking a comic-themed project, but putting it on screen in a way that works. Additionally, he discussed his collaborations with fellow cast and crew members, and talked about the process of turning his quick wit into a powerful weapon.

For several years you've been tentatively connected to The Flash and Deadpool; when did Green Lantern come onto your radar, and what was the big draw for you? With Deadpool under your belt, were you conflicted at all?

Well, yeah—the conflict I had at all had to do with Deadpool. If I had done a Deadpool movie, I wouldn't do a Flash movie. The Flash always felt like a slightly PG-13 version of Deadpool in terms of wit. But obviously Deadpool is more of a deconstruction of superhero movies, and that, I don't see as a conflict to Green Lantern. But Green Lantern came on the radar the same as any other movie would. They said would you like to meet with Martin Campbell? He's directing. And I know a little bit about Green Lantern—I know a certain amount about comics, I don't profess to be a comic guru, but I read Deadpool since I was 20. My brother introduced me to it. I thought it was the coolest comic out there. When I was younger it was X-Men, Spider-Man, Superman. [So] I met with Martin and it was like any other film. At the time that I met him I wasn't super interested in playing the part, but I was really interested in Martin Campbell. Aside from being an attractive man, he's a fantastic director. I was anxious to sit down with him and hear what he had to say. We had a meeting, and another, and one more where he took me up to the art department. And I couldn't believe what I was seeing—it's pretty compelling stuff. For me what I fell in love with was the scope. Granted, the first one has to work in order for there to be others, if it does work I see it going so far beyond Hal Jordan. Hal Jordan is the key story in the mythology but there's so much more to tell. It can go far beyond him, in the fall of Hal and all that.

Was it just Martin Campbell's previous work that convinced you they could bring all that artwork and those concepts to the screen? You can see all kinds of pictures, but it may not translate to the screen or may not come together.

Martin is a great director. He can do small movies; he can do big movies. A movie like this is such a collaboration—everyone has to be at the top of their game. I saw the people that they hired, and I've got to say that had as much to do with my decision as Martin Campbell. Martin is a very smart, very shrewd guy. He's nobody's fool. He knows how to staff a movie like this. When you're dealing with a budget this high you're less of a director and more of a general. You really have to have an ability to marshal enormous forces into one creative goal, and that's something that Martin is very good at. I looked at [production designer] Grant Major, [cinematographer] Dion Beebe, all these names flying around that were working on the movie. That will tell you that it's being taken care of the right way. I hate to say it, but Warner Brothers spends money on effects; They make sure everything looks great. I'm not a Harry Potter-head, but when I see those films I'm blown away at how well they are done. You can't escape that fact. They are great stories told in a great way.

Blake's just a chemistry thing. For Carol, lots of people came in and chemistry is not something you can manufacture—it's there or it's not, and we had this great kind of push-pull kind of thing that really worked for the movie. That's something you need for Carol and Hal. With Mark, Mark just brings such a weight with his characters. When I was working with him, I felt like I was in the ring with a bullfighter. He's using my energy against me all the time. He's so elegant in the way he moves and the way he behaves and speaks; it's minimal effort for maximum gain with him, and that's all he needs. He's a character where you are like, "Wow, I'm curious to see what this guy is like when there's maximum effort." He's obviously going to be something to contend with. I think they handle his storyline and his introduction in such a responsible way because it would be very easy to give him the mustache-twisting villain role, and he doesn't have that at all. He's incredibly deep and complex and there's a lot to him.

Other superhero franchises have stuff like mythology or science to connect it personally to the people making the films. Is your description of the suit as a bioweapon the thing you needed to do to feel a sense of connection to be able to play this?

So much of the story is on Earth and so much of the story is in space, and it really helps to kind of ground us. In the scenes where we are on Earth, as we know it, we get perspective as an audience, and as an actor in the film. And you can carry that reality with you into the space scenes—we really have context that way. That's been hugely helpful for me. Had we started the movie doing the stuff we are doing right now, besides just kicking the living shit out of me everyday, which is what it seems like they like to do down there, and there's a lot of blue screen, creating the world, that would have been difficult to do at the beginning. I get to take Hal, the earthling version, into that world. That was helpful because we did all that practical stuff in the beginning.

How do you wrap your head around the idea that the script says, "the ring is going to create a big Gatling gun," and it simply materializes?

It's tough. You just have to go with it. A lot of times you build stuff. I can get a muscle memory of everything that I'm doing; we'll just do it over and over again and we'll just eliminate the solid objects and I'll just continue to do it without it. That helps a lot, talking about it and coming up with different options. The way Martin shoots action is helpful too. There's no moment where Hal creates a construct and then we stop as an audience to really observe it while we are secretly patting ourselves on the back saying, "look how cool that is." It's constantly moving—there's a lot of "blink and you missed it" kind of stuff. That I think is really helpful. It's smart movie making. It's something Martin brought in from the get-go.

Hal certainly has some of the wit of your other characters, but he's much more wholesome, especially as the character progresses through the Green Lantern mythology. How tough has it been to balance your natural sense of humor with that sort of stoicism?

Hal's story is steeped in tragedy. A lot of people lose their parents, but Hal loses his father in way that's pretty difficult for any kid to overcome: he witnesses it firsthand at ten years old. I think that stays with him forever. But I never found the character to be funny; he's more witty. He has moments where he can bring out his wit, but I don't see him making jokes in the movie. Anything he does do in that realm is more of a defense mechanism than anything else; he uses it as a way to push aside any issues or emotions that are presented to him, even though they may actually address something very real and close to his heart. He's a guy that keeps his cards close to his vest. He's not giving anything up to anyone. It's mostly just that—he uses it as artful deflection.