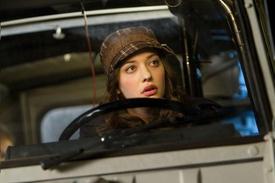 Kat Dennings may be a surprising casting choice for a movie like Thor given her work in films like Nick and Norah's Infinite Playlist on The 40-Year-Old Virgin, where she played decidedly down-to-earth characters who were celebrated for their smarts at least as much as their sex appeal. But it's precisely that sense of self-awareness that made her essential to Kenneth Branagh's adaptation of the Marvel Comics superhero, where she serves as a wonderfully grounding influence that balances out all of the film's celestial set pieces. Boxoffice recently sat down with Dennings at the Los Angeles press day for Thor, where the young actress talked about finding a balance between big action and her character's disbelief, as well as the ongoing process of picking roles that not only challenge her creatively, but offer her greater commercial opportunities for the future.

Because this character didn't exist in the comics, did you just use the script as a reference, or did you research the comics or the mythology of Thor at all?

I was familiar, but the thing about Darcy is that because she has no idea what's going on ever, and she kind of is in her own little space-cadet world, I on-purpose didn't do much preparation, because I wanted to feel like I didn't know what was going on, just like she doesn't know what's going on. And because I'm lazy (laughs).

Many of your characters have that ability to cut to the quick of what's happening in a scene. How much of your reactions were scripted and how much were you able to step outside scenes to find your own reaction to what was happening?

Well, that's all Ken. Ken was the one that if you had a question, he'll stop and come to you and talk to you for 15 minutes. But we took care of that in rehearsals, really, because we had a lot of rehearsals, and Darcy's character was sort of there, but she wasn't fleshed out. So that all came from rehearsing and his just unbelievable attention to detail. He wants every character to be completely filled out, and I think they got a lot of that from just watching me and Natalie interact, because we've been friends for years. They kind of saw what they liked and used it—which I think is really nice, because it's sort of an unusual female relationship to see in a movie. Especially in a movie like this, because we're not all hot and we're not wearing anything tight; we're just like cool bitches who are really passionate, and really love each other. There's no cattiness, there's no nothing. And Jane especially, Jane's character is more interested in being smart and informed than she is in doing her make-up, which I think is really important—I think girls will really like that. And dudes, too, because she's gorgeous.

As Tom Hiddleston said in the press conference, Loki saw himself as the hero of the story. Do you think that way as an actor—do you consider your character the hero of her story, or is it better to just do the scenes you're in and not worry about the overall picture?

That's interesting—it's a good question. I think it's interesting because just being a person, you're the hero of your story, everybody is; you're the hero of yours, I'm the hero of mine, everybody is our own protagonist. But with Darcy I didn't think too hard, because there are so many questions, like where did she come from, who are her parents, why is she there, and we talked about that with Ken. We came up with a brief sketch of how she got there and stuff, but I very much stayed in the moment with her, because she doesn't really think—she just says random shit that comes to her or she says something before she can think about it. So I didn't want to get too deep into that for this. But maybe in the future there will be time for that.

How difficult was it to acclimate yourself to the machinery of a production of this size?

What's interesting and very unusual for this movie is that most of it was practical. I mean, the Frost Giant stuff, obviously the endlessness was fake, but they took me on a tour and the sets were all built. The Destroyer in our sequences was built—they had a destroyer for us to look at, a 20-foot metal dude, all built for us and standing there so when we were reacting to it, it was really there, which is crazy. I mean, that's amazing! And I think one of the hardest things for an actor is to be scared of nothing, to be scared of something that isn't there, so Ken would have the first A.D. fire a gun with blanks into the air to scare us, or they would have an explosion rigged up, or if we were looking at Sif jumping into a burning building or something, for instance, they would have Jamie [Alexander's] stunt double on a wire flying into a building off-camera for us so that we would be reacting to something that was really in front of us—which was crazy! And I'm sure it comes from Ken's earlier experiences where directors just tell you to do something, and don't really help you. He does everything he can to make sure that you're comfortable and you have something to really look at—which is part of why he's so amazing.

How much do you have to think about which project you want to take on next, to take on roles that show people different sides of yourself?

I try to vary it. It's less about showing people and more about my own boredom. If I do the same type of thing, I just get angry at myself, so I have to keep it interesting. And this is a tough act to follow. I feel bad for other directors, because it's going to be really hard for them to impress me after Kenneth (laughs). But I don't think is really have a plan for my career; I just get things sent to me or read something that I really love, and then I try to get it—and if I can't, then I don't. But I know it seems like this, but we really don't have that much control, unless you're like Brad Pitt; you just take what you can get, basically. And then every once in a while something incredible comes across, and if you're lucky enough to get it, then you do it. And this was one of those things where I really wanted it and I got it, and I really fought to get it, so I'm still just reeling and excited about it.

Are you finding the things you get sent interesting, or is it your responsibility to make each of those potential roles interesting for yourself?

Unfortunately it's usually the latter I think about ‘what can I do to make it interesting?' Because most of the time, if it's a good script, there's got to be something wrong with it; like if there's a really good story, and your role is kind of meh, you think, okay, what can I do to make this interesting for me. Because I don't like coasting through stuff; it's just not rewarding for me, and it's not why I work. But sometimes you get both, and that's incredible. It's really lucky.