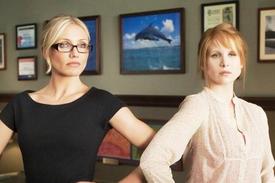 Two years ago, a Hollywood angel flapped its wings: Nicole Kidman pulled out of Woody Allen's You Will Meet a Tall Dark Stranger and British TV comedian Lucy Punch was suddenly handed the part of Charmaine, a crass, spandex-clad call girl who marries (and bankrupts) Anthony Hopkins. Punch, an alert blonde with a brain that always seems to be motoring for a joke, devoured the role. She stole scenes away from two Oscar nominees (Hopkins and Naomi Watts) and was hailed as the best thing in a mediocre movie. Punch followed the momentum to Los Angeles, took bit parts in Dinner for Schmucks and Take Me Home Tonight, and now tackles her biggest gig as Bad Teacher's irritatingly perfect Amy Squirrel. BOXOFFICE asks Punch about her strategy to conquer the Hollywood comedy.

You're meant to be both a completely moral character and the villain. Was that a challenge?

I think the way it was written, she's also universally disliked at this school. Even though her heart is in the right place, she means well, she's a good teacher, she's just simultaneously irritating and so in your face always. I was doing this Midwestern accent which I absolutely love. To my ears it sounds so sweet, but I tried to add this sort of twang to make it chirpy and annoying. That helps her become even more unlikable and you're rooting for Cameron to bring about her downfall and crush her.

You do a lot of outlandish things in the film, like, say, sit on a urinal. How much of that was improvised?

Well, that was. During the rehearsals, we were doing the scene and at one point I put my foot on it, at another point I was leaning on it and then finally I was just like, "Oh, I'm just going to sit on it!" Jake [Kasdan], our director, gave us a huge amount of freedom—and I like physical comedy, watching it and doing it.

You're becoming established as an actor who does these wild roles. What's the secret to also making them believable?

I guess you just have to try to make it as believable as possible. Certainly in real life Cameron's character would be fired and punched in the face, so I think Jake created this heightened reality in the tone. If you're truthful with the character and there is a sort of consistency, you can do anything. She's unhinged and crazy and that's the most fun because you can go anywhere with it.

You're usually blonde, but for the film you went redhead. Was there any meaning behind that?

I liked the idea of the redhead and the Squirrel. It was my choice. I talked about it with Jake and he was thinking brunette for a while, but I wanted a look that was just very, very different from Cameron—from the feet up with those nasty clogs.

What was the significance with the name Squirrel?

It was just a super cutesy name. She's so cute and annoying.

There's a new trend in Hollywood with women behaving badly, like with Bridesmaids. What's your take on it?

I think it's great and real. Women can behave just as badly as men. For a long time these types of comedies were male domain. I remember the weekend Bridesmaids came out, I got emails from people in the industry saying "We've got to make sure women go and see this movie this weekend." It's really important for women in the business. We're saying we like to see these movies and we want more of these movies. I hope it means that a lot of the funny women out there get a chance.

Was there a bad teacher that you remember?