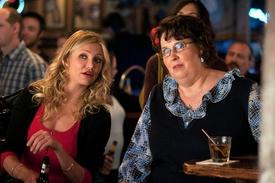 Here's proof that The Office producers love Phyllis Smith: they named her character Phyllis. That's the fame-building gift given to Woody Harrelson on Cheers, Tony Danza on Taxi and Charlie Day on It's Always Sunny in Philadelphia. After stints as a burlesque dancer, warehouse worker, receptionist and preschool teacher, Smith has been in the entertainment business for 19 years, but the first 13 of them were spent in the power position on the casting couch picking comics for Spin City and Curb Your Enthusiasm and The Office—until the day The Office producers announced they'd written a character just for her. She's come a long way. Kinda. Bad Teacher finds her once again pacing the school halls as Lynn, the tremulous wallflower desperate for Cameron Diaz to think she's cool. Art imitates life: Smith tells Boxoffice how Diaz had taught her to smoke.

Lynn is a complete innocent.

Absolutely. Well, at the start of the movie anyway. [laughs]

Did you do anything to flesh out her personality?

Oddly enough, I didn't. I know I'm supposed to say I gave it a lot of study and everything, but I really just tried to find the truth of Lynn in every scene.

Well, having been in casting prior to this, I always would have to find the what the importance was in a scene without hitting you in the face with it. For Lynn, she's the straight version of Elizabeth (Cameron Diaz) so her truth came out over how outrageously she felt about what was being said to her, or wishing she was like Elizabeth. So, I had to find the ebb and flow. We did some reshoots and it dawned on me pretty late that my character was in between Cameron's character and Lucy's character and I started questioning myself, "Should I have been higher, should I have been lower?" But when the sound guys were laughing I thought, "Oh—something's clicking."

Here and on The Office you have a responsibility to be this sort of square. Do you enjoy playing this type of role?

I'm kind of a square. [laughs] Yeah, I do. I have a new film where I have a moment where I play a different kind of character. In Butter, I'm actually the head of the butter committee. I'm by the book, by the minute, by the clock. I think Lynn was virtually living through Elizabeth, but not consciously.

If Lynn had to decide between Jason Segel's character and Justin Timberlake's character who do you think she would pick?

Hmm. I think she might go for the quiet, low key type. I think she would have been drawn to Jason's character. After all, he's looking after her when she was being taught to smoke grass.

How was Lynn described to you and how did you make her your own?

Golly, that's a long time ago. I really don't think I got much of a description of her. Actually, how it came about was I was sitting back stage at The Office in the hair and make-up and Lee, the writer, was on his way to craft services and he just pointed at me. I think it was a complete afterthought. They'd read with a number of other actresses for the role and all of a sudden he pointed to me and said, "I want you to audition for a role" and I go, "Oh. Okay." On The Office, my character has evolved over years, so this was one of the first times I had a character develop so quickly. As I worked on it, I'm second guessing myself. I worked scene by scene as opposed to the entirety of the movie.

The chemistry between the cast makes it look like you guys got along really well.

We did. When Cameron walked into the table read, she greeted everyone and she looked at me and said, "I loved your audition. You were the one. I already knew it." And I was already so nervous. It was exactly what I needed to hear.

How much of it was scripted and what was improvised?

The script was so solid. We didn't have to do that much improvising, and also the writers were on set and they would throw alternate lines to us as we were working. But I found I didn't want to improvise in the middle of the scene, so I did tags. They let the cameras roll after the scene would end and that's when I would improvise. Part of the improvisation that would come through would be in the action-not so much in the words.

What was your favorite moment playing opposite Cameron Diaz?

I loved being in the car with her. The scene in the car was a much elongated scene when I actually hit my head three times on the dashboard—it just kept escalating. And also the pot smoking scene. I had never smoked at all—ever—so she was early on trying to give me pointers on how not to choke on the cigarette. That was the very first scene I shot in the movie and we bonded right away over girly things like shopping, so that day set the tone.