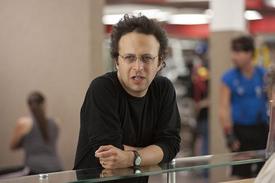 When Jake Kasdan was 9, he got a paycheck from his very first film as an autograph hound in The Big Chill. It helped that his mom Mary was the composer, and his dad Lawrence, the director (not to mention the writer of Return of the Jedi, The Empire Strikes Back and Raiders of the Lost Ark.) But Kasdan wasn't a stage kid—his ambitions were on the other side of the camera. And 10 years ago, he got his big break directing episodes of Freaks and Geeks, the tiny, soon-canceled show that just happened to launch Judd Apatow, Seth Rogan, Jason Segel and James Franco. Kasdan's career hasn't been easy, but it has been blessed. Here, Kasdan tells Boxoffice about creating a raunchy comedy while getting the studio's thumbs-up.

Bad Teacher doesn't try to make Cameron Diaz's character redeemable. Talk about having to protect the idea for what it needs instead of what the audience—or studio—might prefer.

The fortunate thing about this movie is that we really didn't have a lot of what you'd expect from a studio, an impulse from them to make it more watered down and make it more conventional. They loved it as much as we did and it was just a fortunate situation in that way. We were in the lucky position where really we were always just trying to figure out what's the best version of this we can come up with.

Surrounded by all this corny-ness in the school halls, she's this force of nature who shakes everything up.

Yeah, that's a really good way of thinking of it. Casting all of those parts is just completely existential and a challenge. Not a challenge, it's just quietly the most important aspect of the movie. It quietly sets a tone for the whole movie and the reality that they bring to it and the way that they're funny. They're very subtle way is what sets the stage for everything that's outrageous and wild. Elizabeth (Diaz) is funniest to me, even in the script, in relation to those characters-she plays off of them and plays off of that reality so well.

You invert expectations in the sense that you have Justin Timberlake as a charming, nice and wholesome guy for her love interest, but instead you're rooting for Diaz to go for Jason Segel's character who a) knows what she's plotting and b) is almost as caustic as she is.

That's right. There was just a mental dynamic that I thought was really funny and winning in the script, which is that in some ways the roles are inverted from most comedies. You expect there to be a male protagonist in an R-rated comedy with a hot girl that he can't get, and then he realizes that he's actually in love with this friend or whatever. There's nothing about this that's a traditional romantic comedy, but it is using that aspect and making it so that it's a woman and two men and the sort of false "Mr. Perfect" guy. She became much more suited to the edgier guy who gets her.

She's clearly a terrible person, but there's a point when you need the audience to at least root for her to not get caught. Was there a particular scene to get the audience to connect to Elizabeth?

It's a fine dance the whole time because you really don't want to sell out the idea. I was thinking there's nothing more cringe-able to me then when filmmakers beg you to like somebody or that kind of thing. We were very conscious of not wanting to do that and we always said the tiniest bit of bread is all that we would allow her. It worked out because you liked her enough to want her to be less miserable than she is. It's like an unhappy person with terrible values who you are inclined to like because she's funny, she's quick, she's beautiful and she's Cameron Diaz, which is a winning combination. You're rooting for her and what you're rooting for is for her to be slightly less miserable—that was how we thought about it. It wouldn't so much be about the boobs finally as finding somebody who gets what she's like. That she wouldn't suddenly become a good teacher, but that she would find it in herself to be slightly generous with someone who needs her in the moment when they need her. So there's a few little beats throughout where we're trying to carefully calibrate opportunities for her to have some decency or for the character's long forgotten decency to emerge without becoming tacky.

Like the scene where she tells the 7th grade geek that his life is going to suck until he gets to college. It's both brutally honest and remarkable sensitive to what he's going through.

Well, sometimes that's the best way to be sensitive. The best thing you can be is honest and not give false hope. And also some light encouragement.

And a lot of the work of making you like Cameron Diaz is done by making you hate Lucy Punch's character, who's just so sweet-seeming and perfect. The same with Timberlake, who in every scene drives another nail in the coffin of Diaz's attraction to him.

What is sort of appealing in this stretch is the way that people are gradually revealing themselves. Your irritation grows with hers. It makes her likable, but more than that it's sort of how we identify with Elizabeth's point of view, you know what I mean? It wasn't really so much a concern about likability, it's just that the people are driving her crazy in ways that we understand which allows us to laugh at the way she responds. I mean, at least that's the idea.

This movie is not like Bridesmaids in any sort of way, but it certainly shares being a female-centric comedy with a lot of alumni from Freaks and Geeks—

With a hard-R rating.

There's been such a dearth of comedies that are both broadly appealing and female-centric. To have two in two months, is that a coincidence or do you see studios becoming more accepting of the idea?

I think it's a coincidence. I would say more than anything it speaks to how limited the range of comedy roles are for women in movies. To where it's shocking when there's a couple of movies that let them do some really different things. It's totally exciting because there are a lot of really funny women who could not be happier about what's happened with Bridesmaids, which is made by some really good friends of mine. Paul Feig, it's a great thing for him. And also Kristen Wiig, who I worked with on Walk Hard. I'm a huge fan of hers and I'm just thrilled to see that happen. It's all happened with Judd [Apatow] sort of guiding the process. He's one of my closest friends and closest collaborators and I just love that he's helped these guys do this thing and that it has been received this way.

When Judd moved from TV to film, he basically redefined how comedies were made. And Paul is a little less raunchy, but he's also doing his own thing. At this point you've made several movies and all this TV work. How would you define your work from other filmmakers?

Do you feel like all your projects will be comedies—or at least comedic?

Yeah—more than anything else, just because that's what excites me. The possibility of something that's going to bring me the most enthusiasm and energy to do it. When I feel like it's new to me, it's like it's the first time all over again.