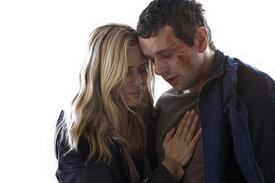 Maria Bello has spent the past decade proving that she can do just about anything: after strutting as the sexy den mother in Coyote Ugly, she bared all (most powerfully, her soul) in Wayne Kramer's The Cooler, and then played a housewife coming to terms with her husband's past in A History of Violence. Her list of challenging roles continues with Beautiful Boy, in which she plays a wife and mother who awakens one morning to discover that she's raised a deadly school shooter. BOXOFFICE sat down with Bello and talked about what makes her so fearless as an actor.

This character seems to mistake the needling attention she gives for love. When you came into this, how well-defined was her personality and what did you introduce into it or develop?

I probably read the script a year before we shot the movie, and I immediately said "I need to do this," because the script was so well-written. It was all on the page, and the levels of grief were on the page, and you're right that she hides behind details. She hides behind details because she's terrified. I find that in a lot of longer-term relationships, people start to be dishonest about who they are because they want that feeling of security, which is a big lie anyway, and these people have this tragic event and they can't lie anymore to each other or themselves.

How much of that obsession with little details was seeded in the script?

It was in the script, and we really pushed that idea that she was trying to be in control of her entire life and of her son and of his emotional state and everyone around her to feel secure. And then she realizes that she can't.

Is there an experience you've had that you could relate this to—or for lack of a better way to describe it, does playing a role like this require pure imagination?

I always say that the day I gave birth to my son, who's ten now, was the best day and worst day of my life. I have never felt so much love and grief because I realize I love this person more than anything, and I can't keep him from learning the lessons he's meant to learn in this lifetime. As much as I would like to keep my son from pain, I can't do it, so in that way, as a parent, I could relate to this easily. I mean, I raise my voice to my son and I just blame myself and think he'll be in therapy for years (laughs). So to take this huge step up in terms of how tragic that is, I sort of emotionally understood it.

Do you have to think about how your efforts to love or discipline your own son will affect him in the long run?

Oh my gosh, it's so tough. My kid is strong-willed and singular, independent, he can't be bridled or reined-in, and I find that there's a really difficult balance being a parent, trying to let him be who he is and express who he is, and at the same time to give him some boundaries that he feels safe in.

How did you principally define the relationship between your character and Michael Sheen? It's really interesting that it's not until the funeral scene hat we actually see the two of them even touch each other.

That's right. As I said, the script was so well-written, and the levels of emotion were there, and it was very obvious from the script that these were two very disparate people who were falling apart and miserable and didn't know each other or themselves. And I like that you noticed that moment, because we made it a conscious choice, for the hand-hold, for the reaching out, for the oh my God, someone anchor me—dear God, we're sharing this experience together.

Was there any sort of deliberate effort to mimic the stages of grief with the structure of the story?

We studied the levels of grief and the grieving process, especially for a child, is years. And we had to go through the grief process in this movie in a two-week time period, or however long that time period was, and hit all of those levels of grief. Michael and I made sure that we weren't on the same level in the same scene all of the time. So when I was in anger and denial, he could be in vulnerability and deep sadness. We really worked on that—it's an interesting question.

Shawn's filmmaking style seems very observational, almost catching the action unawares. How did that affect the way you would play scenes, since the blocking was unconventional?

Oftentimes, it was like doing a play. If you see that last scene in the hotel room that we did, except for one cutaway to me in the bathroom, it's all one take. So we did it about five times and were just exhausted at the end of it, but he let us play. I mean, it must have been an eight-minute scene that we did, and that rarely, rarely happens in a movie. I love the way that this is shot, and I love the creative experience of how this was shot; that it wasn't on sticks and close-up, and this close-up. I find that such a bore to watch.

How much do you typically prefer for the set to reflect the atmosphere of the scene that you're performing? Do you prefer to maintain the same level of seriousness in between takes, or diffuse the tension with humor?

Usually the more dramatic a film is, the more fun it is. You need that levity in between, so we laughed an awful lot on this show. Especially Michael and I immediately had a bond, and even our time off screen we would just be babbling and laughing together. So that felt good, but I also, when I'm in the midst of a scene, and really deeply into something, and someone talks, I remember sitting at the dinner table and doing the scene with the young man, and all of a sudden people started talking, and I said, "Shut the fuck up!" I get that sort of emotional. So don't ever talk when I'm acting, is what I'm saying.

You've really been able to find so many different and interesting kids of roles, which is unusual because actresses can sometimes get stuck playing the wife or mother or love interest in a story that centers around a male character.

No, because I've chosen not to. Those were very uninteresting parts to me, so why would I do that? All of the women that I know and admire, like most women, are fully-formed beings that are oftentimes in the media, in sort of big-budget films, are just sort of the girl on the side, and it's too boring and doesn't make sense emotionally to me. I couldn't play it.

Does that require you to be choosier or to find collaborators with whom you can work on a character that may now be as interesting, and make her someone substantive?

It's both. I read a script and immediately I have an emotional connection or I don't. I have amazing agents; my agent Kim said to me last night, "everything you've done all of these years, and I've been with them for ten years or something, she said, I read it and I know it's something I want to play, and then I know it's something you would want to play," because she's a really strong woman. But now this next phase of my career, going into Prime Suspect, is pretty incredible and fulfilling, that I really get to on a massive scale, on a television scale on a network show, play this incredibly strong woman.

How do you look at acting on a television show where you have more of an opportunity to develop or refine a character as opposed to a film where you sort of have to get it right in one shot?

Since ER years ago, I thought I could never do another TV show because I'm, especially when I was younger, really a gypsy and didn't like to go to the same place every day and do the same thing. But when I read this script, I thought, "oh my gosh, how could I say no to this?" and then I met Peter Berg who is just brilliant and wild and let us create and collaborate and play and improvise and really trusted me as an actor to do my job that I do best. He did what he does best, the writer, Alex Cunningham does what she does best, and all of that together made it very, very exciting, and I'm looking forward to shooting the series.

To what would you attribute your fearlessness?

I realized when I was a kid that all I had was the truth of who I am, so what's the point in this lifetime that's so short of hiding anything? Why not just use all of yourself?