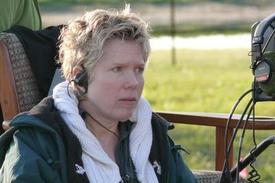 When Buck Brannaman was six, his father whipped him—literally—into being a world class trick roper who made the family extra money trotting out his skills for commercials. He was a trained animal who hated his master. Today, Buck is a real-life horse whisperer (seriously, he worked on Robert Redford's flick) who teaches other masters the best way to bond with their beasts. Horse-lover Cindy Meehl had never shot a documentary when she met Buck at one of his training clinics. But when he shocked her by saying yes to having his life taped, Meehl recognized she had the inside track to shoot a film about trust, pain and the soul inside every creature. Buck premiered at Sundance, won cheers from the Texans at SXSW and now rolls out across America. Meehl talks to Boxoffice about what we could all learn from a horse and why Buck could be the next Dr. Phil.

This is your first doc. Were you a filmmaker looking for a subject, or did the subject just come to you and you had to make a film about it?

It was a subject that I had to make a film about. I do have horses, I’ve ridden horses, so that was a large draw for me but there were just so many levels in Buck's story that I thought needed to be told. I didn’t see anybody else doing it, so I just thought I would take a stab at it—so I did.

How did you approach Buck with the idea of making a documentary about him?

It was really funny. I was at the Guinness Meadow Ranch and I kept thinking somebody should do this, somebody should make this documentary about him. He was sitting by himself at a picnic table and I thought I would just go ask him. If it’s yes, great, if it’s no, there’s no loss. So I just walked over to him and asked him if he had ever done a documentary and he said no. And I said, “Would you like to do one?” and he said okay. It was a little stunning. He didn’t even ask me if I’d made a documentary before, or a film. He just said okay. So I said, “Well, I’m going to need to contact you then,” because I knew he was on the road all the time. So he wrote down his phone number on a little piece of paper and I just said I’d start to work on it. It was a two and a half minute conversation at most and it became a two and a half year project. It was really one of those handshake kind of deals. He trusted me and you don’t make excuses around Buck, you just buck up and do it, so I went out and figured it out.

Being a horse woman yourself, what did you learn in those two and a half years?

Oddly enough I haven’t had enough time to ride much since I started making the film. I have horses in my backyard, but it’s so time consuming to do this. This has been a real gift to be able to watch him and study him so much. And to this day I’ll be watching footage I’ve seen a thousand times, but there will be little light bulbs that come on where you go, “Oh, yeah I’m not doing that little thing.” He’s at such a high level it all looks pretty simple and it’s all just common sense, but his level of riding is so extremely advanced that he says he never stops learning. If you think you know it all you’re in the wrong business because it’s something you’ll learn for the rest of your life.

People have been using horses as therapy for autistic children, or children with problems being socialized. What is it about a horse that draws that bond between animal and a human—especially given that it can’t get on your lap like a cat or dog?

I’ve learned through Buck is how extremely sensitive the horse is. If a fly lands on a horse, you’ll see them react: you’ll see their skin wiggle and their tail will switch and that’s all it takes. If you drill every little step out of them, you make them dull, you're using the life out of them. If you realize there’s this huge animal with so much sensitivity, it’s quite profound on a human level. It’s like discovering your own humanity through the horse—you have to get tame and develop that relationship with them. I think autistic kids have an awareness that some people don’t understand, but that a horse does.

So much of the documentary is about Buck's abusive childhood and how it related to the person he became with animals. But when you see him talk today, he’s a funny and gregarious guy. While you were spending time with him, could you still see in him everything he had to go through?

He's a complex person. You can tell there’s a lot going on, yet he has to constantly deal with every kind of person and every kind of horse—and he definitely blames the human over the horse, so if the horse misbehaves he always blames the human. He can get frustrated, but he does have a way of keeping it together and realizing everybody is bringing a lot of baggage to the table, especially with horses. A lot of what he’s teaching you is how to be a leader. Basically, it’s true: if you can be a leader to a horse, you can take over a lot of other areas of your life that you might have had trouble with. It’s a very empowering thing that he’s teaching. He has a lot of friends and everyone always remarks on his compassion and what a wonderful person he is. I think he has come through a lot and has come out on the other side. He’s tough and I think he is tough on people just because sometimes—well, like, I have two children. One of them, if you just look at them with your brow furrowed, they'd be afraid. The other one, you raise your voice and they don’t blink. Everybody has a different element that gets their attention. A lot of people go, “I want him to yell at me, I want him to tell me how it is.” It’s not for the faint of heart—he’s going to tell you the truth. And it’s not always something you want to hear.

The last third of the film is a long sequence about a neglected animal that Buck calls the predator horse. What did that whole scene meant to you and why was it important to include in the film?

Honestly, I was not going to include it in the film because I thought people might get wrong message and think it’s something that happens a lot. My team and my editor, they saw the value in it and when we did test audiences, people were understanding what it meant in the grand scheme of things—not looking at it like “Oh, Buck has failed and there’s this horse that’s put down, it’s such a tragic story,” but as a huge lesson in the responsibility of owning a horse, or an animal or a child. Everyone brings something different to that scene. Somebody said they saw the horse as what Buck would have turned out as if he hadn’t left his father and been adopted by the Shirleys—that he could have been that horse. I’m very pleased that people understand that it’s not about the tragedy of an animal not making it, it’s about a person coming to the table with the best of intentions, and even with the best of intentions we can make the wrong decisions. It just makes you realize the responsibility you have in life.

Has the owner of the predator horse seen the documentary, and if so was it hard for her?

As far as I know, she has not been able to see it. I have talked to her and I have heard that she is going go back to Buck’s clinic this year with a horse she can ride. I did want to let her know that we included it in the film and it was hard for her to talk about it—she started crying remembering the whole incident. It was really hard for everyone that was there—everyone was crying. It was very emotional, especially for Buck. But she was happy if it would help people learn, she was for it being in there and I look forward to her getting to see it. And I hope she realizes how powerful and meaningful it is and that it was a great sacrifice for her to be in the film and allow the story to be told.

I could see Buck on a talk show like Dr. Phil talking about his philosophy and people at home applying it to their own lives, even without horses. He could become a pop psychological healer.

The stories! I couldn’t put them all in the movie, but countless people on film gave testimonials on how he has really changed people’s lives because it does give you this sort of empowerment. He would do six-day clinics and these women would go home and get a divorce. They'd feel empowered like, “I’m taking over and I’m not going to put up with bad behavior.” I talked to one woman and she was in tears saying she divorced her husband because of him, but it wasn't like she was in love with Buck or something. She had been in a really bad relationship and his theory is if it’s not working, then change it. He’s tough about it. He seems really kind and nice and he definitely is, but he doesn’t like to hear whining and excuses. So if something’s not working, then why do you keep doing the same thing over and over whether it’s with your horse or your life?

What's interesting about Buck is it’s an independent film that can hit a broad, wide audience: red state, blue state, city and rural.

We've realized that more and more. It's weird how originally my motive was about the horse because I found this such a profound way to look at riding. I knew he was inspirational and he’s very funny. Our test audience was not horse people—it was New Yorkers—so we realized we were developing a film that would be broad. I really thought my goal was to give hope and inspire people. I think this point of time everyone really needs that. There’s a lot of stuff out in the news that’s so negative. It’s been very rewarding to have all these people, young and old and every age group, come up after the screenings. I know we did a huge screening, several huge screenings when we went to Sundance, for high school students. We also did it in Salt Lake and Austin and the teenagers just loved him he was like a rock star or something. Then the teachers came up and said every teacher in America should see this film. I thought “Wow, that’s so cool that they get it—that it’s not just about horses” People have said that military people should see it. You name it, people say “Oh, this would be good for such and such group.” We’ve been really thrilled because there’s not a town it can’t play in, and that’s really exciting.