Exclusive: We ask Pixar's John Lasseter, "Is 'Cars' in a parallel world or post-apocalyptic?" 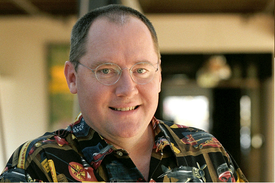 Since Pixar broke into mainstream consciousness with Toy Story in 1995, many of their stories have focused on the secret, unseen lives of familiar creatures and objects, from children’s playthings to insects to fish. But Cars was a rare case: these vehicles didn’t merely exist on the periphery of human existence, they replaced it, triggering questions about how our world translates to theirs. And Cars 2 takes this alternate reality one step further by mentioning dinosaurs. Wait? So either there's an extinct four-wheeled ancestor or flesh-and blood creatures existed before cars rose up and took over the earth? Has Pixar created a parallel world or gone post-apocalyptic?

Humanity needs answers. Boxoffice sat down yesterday with Pixar head John Lasseter, Cars 2's writer-director, to get his take on the crucial dinosaur question. (This is only an excerpt from our longer chat with Lasseter—look for the rest of our coverage this week.)

In Cars 2, you mention the existence of dinosaurs. Are those dinosaurs flesh and blood or are they cars? And further, do you have to vet those sorts of references that may introduce a different aspect to the series’ mythology?

I mean, in the mythology of the Cars world, the living creatures are vehicles of some kind, and so it’s like with dinosaurs. I always imagined it would be some kind of dinosaur-like car or vehicle, something like that. It would actually be an animal. And whether it would actually go down in the earth’s crust and get smushed and actually make a fossil fuel, I don’t know—we don’t go kind of that deep into the mythology of the world.

You kind of touch upon it with the cow-tipping, where dump trucks are sort of the bovine class of the Cars universe.

Yeah, I was driving across Nevada at one point and I was driving by myself. My family and I, we had stayed out on vacation too long, and they had to get back for school, so I just put them on an airplane and said I’ll drive home. And I was driving across Nevada—and the loneliest road in America was just really fun—and I looked across at this dump truck and thought to myself, "That’s a long way away!" And I realized, "Oh, that’s one of those huge guys!" It was at some mine or something, and I realized how gigantic this thing was, and it was like, "That’s kind of fun."

Because there is a tacit acceptance of “car-ifying” everything in this world, how do you make sure you don’t violate its rules?

I’m pretty adamant about sticking with that. We don’t really have animals within this world. I like the idea that there are some—in the same way that we have intelligent beings and then animals that have brains and stuff but they’re still animals. And I sort of think with the tractors, we established that there are certain types of vehicles that are just more like animals and stuff, and we find that sort of funny. And then there are insects, the tiny little flying bugs, so we’ve tapped into that world. I think that’s really fun, to take it and expand the world o f the living creatures all being machines. So we stick to that. I originally had the idea that there’s no parents and kids because cars are manufactured—there’s no having babies in this world. But we did tap into that because I wanted to show Francesco Bernoulli’s mother as an old Formula-1 car. I don’t know—maybe he’s adopted. But we did go there a little bit with just that. But I’m aware of these kind of rules. And the dinosaur thing is just a funny line. We figure that if someone really wants to see it, we can figure out what a dinosaur in this world was or looks like.