How to build a talking car? Says 'Cars 2' Art Director Jay Shuster, it starts with Google. 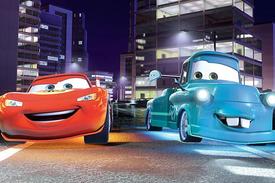 I came from Detroit. My father was a car designer for 43 years. I came pre-loaded for this project. Really, I was predestined to design cars, but I just didn't want to. I came out here and designed spaceships for a while [for Star Wars: The Phantom Menace and Attack of the Clones]. And now, like my father, I'm designing cars—only under more creative pretenses than Detroit.

The engineering of these cars, there's a lot that goes into it. Every car has different challenges. We really want to get the mouth and eyes to show as clearly as possible, so we're playing with the angles of the windshields. We can't rake it too much or it looks like it's looking up in the sky—there's a science to it. You have to strip away some of the detail to make the face read. I have to be aware of, say, a headlight—could it stretch and deform and look strange? They can't stretch too much, or hyper-extend, there's no shape-shifting. Maybe in three quick frames the animators could bend his body just for impact.

I want things to make sense. And John doesn't want a Transformers movie—or I should say, I a movie where things transform-and so with, say Finn McMissile, our spy car, we nailed down his bodywork and made him the classic English 1960s sports car. And then we went in and found places for the machine gun to pop out. There's a little bit of transformation, but we're not cutting through the body and saying, "Hey, it looks like that fender can rotate open." We didn't want to busy the form with extra stuff. So no Inspector Gadget—definitely reality-based stuff that would appeal to your average and hardcore gearheads. We've always joked about there being a mythology, you know, "Where do babies come from? The trunk!" Of course, you never go there. It's kind of unspoken. I'm sure John has ideas, but he'd also be quick to say, "It's just a movie."

We start with nothing. We start with John Lasseter in the room because John is one of those people who can just sit there and pour ideas out on the table. He'll have three, four criteria—sometimes just one or just a crumb of an idea—for a character, which is the best because then you can go off in any direction you want. The first two or three months is just plastering the walls with photo references, spending a lot of time on Google and finding the full range of who the character is. And it's kind of up to me, as well-there's a lot of creative freedom. We distill down from week after week of art reviews, "We like these five cars," and then we trim them down to two. And then I just start sketching. Honestly, I'm sketching throughout the whole thing. Something I draw in that meantime might become something.

We had less time on this one then we did on the first, so to get them out the door to Modeling and then Articulation and then Animation, I'd do a lot of simple character studies. For Finn McMissile, I really wanted to nail that pontoon on him and that understated fin. The sideview really worked for him. John really became attached to that sideview and it spawned the rest of him; from there, we worked on the front view, the back view, it blossomed into a 3D graphic. I was doing a lot of three-quarter studies to look at the grill, the front clip, keeping in mind that he has all this spy gear we've got to stow. I was thinking, "Oh, those bumperettes will be a great place to store a grappling hook." John planted the idea of grappling hooks in me, so I was always thinking about them.

With Francesco, our Italian Formula 1 racer, all of his suspension is revealed, so we spent a lot of time on his bodywork. We honed him down and massaged his form because those cars are beautiful and we wanted ours to be, too. We sculpted him and that gave us an impression of how much of his suspension is going to show. Then we realized that when he takes off his front wheels, he's stretched like a rubber band and it's really ugly. Something like that took about two months to figure out what was going on—we developed a whole telescoping arm that had a pivot point. Francesco and Finn were the standouts: Francesco because all of his parts are exposed and Finn because his spy gear has to come out of somewhere.

Then Pixar does what's called a "sketch model" with just simple contour lines defining the parameters of the car: the beltline, the sill, the greenhouse. Then we start laying in the geometry between those lines, then there's a whole other area of color and shade and paint and metallics, carbon fibers—all of these textures. Then the articulation: we're putting a skeleton inside this thing and making a driving system that allows them to gesture and the tires to give like they're inflated and reacting to surfaces. All these processes become intermingled. The animators might get a hold of an early model and start pushing the suspension and doing a rough acting pass. We might get an email from them saying, "Oh, the suspension broke when the car rolled to the side." So we have to go back in and fix that-we have a number of fixes throughout the process-and by the time it makes it back around to the animators, it's a pretty robust model at that point.

I worked on the first film and I learned the craft of designing these characters, these cars, from Bob Pauley, the production designer for the first Cars. On the first film, I sat in a room for three years and just drew. Bob took the drawings and slid them under a door. Now that I'm more involved in the process, it's chaos but it works. I really haven't figured out how, but that speaks volumes to the management: knowing where to put us when, how to get something through a system. As an art director, I have to look at this car and say, "That's going to get caught up in articulation because it's a nightmare," and I plan for it. Maybe we don't release him for two months because the best articulator is busy.

Now we have boats, we have trains. The boats are crazy because their mouths are on the bow of the ship and there's a sharp crease point running through them. And not everything can become a character. Some reporters were asking, "Why no motorcycles?" Because it's all based upon having a windshield to put the eyes on. We're looking for vehicles that have that and we're leaving pretty much every stone turned-up, I should say, because we've got the boats, the planes, the helicopters, the trains. It really is John's vision. Maybe space race can be next. I'd love to design a Lunar Lander or Sputnik.

I've definitely carved myself a niche here at Pixar with car design, industrial design. I worked on Wall-E and designed Wall-E and Eve. I worked on Toy Story 3 and designed the architecture and the cars for that. Hopefully they'll keep making more robot movies, and if not, then for me it's architecture. Anything that's hard surface; I'm very fearful of any organics. Now I'm on Toy Story shorts. Like the Mater shorts, they're producing a bunch of these featurettes and I'm working on interiors and architecture and vehicles—if there's a hard surface to be found, I'll be there.