Larry the Cable Guy on being America's tow truck: "People are just haters. The guy who runs Pixar is a winner." 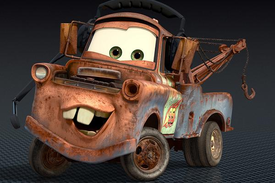 In this sequel, the Cars go abroad for an around-the-world car racing championship. Your tow truck Mater represents America in a lot of the film—how does that feel?

You know, it is really cool. I’m really happy I’m in the movie—it’s an awesome movie, these Pixar things. They’re always good, you know. The writing is so good, the plotlines are great, they always have good endings. The humor I love because it's a lot of adult humor and kid humor, so everybody can enjoy. They’re the kind of movies that even when the kids aren’t around, you can watch it and still be entertained. It's like SpongeBob Squarepants. When the kids are sleeping and there’s nothing on HBO, "Hey, SpongeBob’s on!" The humor is funny and that’s the way with this movie. So I’m proud to be a part of it.

They’ve said all the cars in the film aren’t modeled after a particular car, but do you feel like your truck is a certain brand?

I think I look like Mater! You know when I first got the part and they showed me what the truck looked like, my wife said, "Honey, that’s hilarious—he looks just like you." I said, "That doesn’t look like me!" and she said, "It looks like you before you got your teeth fixed." I go, "Yeah, you’re right." I have new teeth. I got my rock ‘n’ roll teeth and my country teeth. I’m Mater so it’s hard for me to say, but friends of mine look at me and go, "Man, that’s perfect casting. When I see Mater, I think of you." And it’s not just the looks—we even act the same.

This being your second time doing a Cars film, did you come in with more ideas and lines to bounce around with John Lasseter?

Yeah, I’m allowed. John wants me to do it how I want to do it. It’s my character and it’s me. Whoever is writing the movie, they write it in my voice but they can’t say things like me. So I will change certain words around and some phrases. Like if one of the lines in the script is, "Hey McQueen, stay right here, I’m going to get something to eat," I’ll be like, "Hey McQueen, daggum, I’m getting hungry. Hey stay here, I’m gonna go out and get some viddles. I’mma run out and get me somthin to chew on." I’ll say it like that, so it breathes even more life into the lines. It’s pretty much like Seinfeld: the line is the line, but it's how you deliver the line. Sometimes the line isn’t funny, but how you deliver the line makes it funny. Remember on Seinfeld about these pretzels are making me thirsty, remember that line? Just the way he says it. [imitating Jerry Seinfeld] "These pretzels are making me thirsty." Well on paper, it’s not that funny. It’s just a line he was saying—it’s not funny. But the way he said the line it was funny. So that’s what I was hired for: to do that. To make lines funny. And to be Mater, so they gave me all the freedom in the world to do that. That’s why I like working for them. And that’s why their projects are so good. The work environment is unbelievably great, everybody’s so happy to be a part of that organization. John Lasseter is the head of it and everybody that sprouts from the head, it’s because he’s good. He makes them good. And people do good things there because he’s so good you don’t want to disappoint him. Because not only do you want to do good work, you don’t want to disappoint him because he’s your buddy. He just makes for such a good work environment—I’ve never seen anything like it and that’s why they say it all starts with the head. It does. And Pixar, the head of it is such a super person. That everybody works so hard to make things work

And when you look at Pixar's recent films, a chain of just amazing movies, you came to Cars 2 with this really high bar to reach for. Was that a lot of pressure?

Lasseter gets it. He gets people. He’s well travelled, he’s married to a girl from Arkansas. He’s normal. He hasn’t lived in an apartment his entire life and been sheltered from the rest of the world. He knows how people think and how they operate, what they like, what they don’t like. He’s good at it. He’s not a sheltered guy. He's been everywhere, he knows what they like. And when he writes his movies, he wants to make sure there’s something that everyone will relate to and something everyone will like. And that’s the cool thing about these Pixar movies. These are those movies when there’s a guy like me hanging out by himself, sometimes you want watch it by yourself because you don’t want to kids to see you tear up over something. Because those movies will rip your heart out. That’s why they're so successful. And people sit around and say, "Well, they’ve had nine successes but this one's gonna…" You know, people are just haters. The guy who runs Pixar is a winner. He’s successful and he just won’t let that happen.

As a comedian who’s toured America extensively, you also have that kind of countrywide perspective that people based on the coasts don’t have. Talk about reaching out to all audiences.

Well yeah, I travel all over the country and I see all different races and colors and they’re all good people. I’m doing that show on the History Channel, Only in America, I’m doing it because I want to show what’s good about America. The news don’t cover what’s good about America—they cover what sucks about America. I see what’s good every day, and it’s great. It's a great country and I know what people laugh at. People will come up to me, even people who like the history show and people who have never come to my standup shows, they like it, you know. They're basic Americans who love their country; they’re just trying to live the American Dream and raise good kids and work hard so their kids have things they don’t have. That’s basic America and they’re good people: they’re kind, they help one another, all over the place. You don’t see that in the news. I see it everywhere, so I think that helps me in my standup. I know what people laugh at, but I have a weird sense of humor. I have a goofy sense of humor, so you have to have a certain sense of humor to like what I do. In the same aspect of John Lasseter I travel everywhere and see all kinds of people. They’re all basically the same. That’s why Pixar works so well, they’re writing for a large contingency.

Well, I don’t know. Man, I don’t know. I wish it would. I think people need to chill out a little bit. You've got me, I have no idea. I wish it would happen just like you would, but I have no idea how. Maybe this movie will make it happen. I think if you start putting out more movies that start bringing people together, maybe that might help a little bit.

The idea of an audience coming together all in one theater.

And there's a lot of them who are together, already. Look, it’s not at all as tense as it seems. It's not, I see it. And when Pixar writes their storylines, they’re all good. Everybody can enjoy them and they give you a good feeling inside. You know, we need more movies like that and maybe people would start doing better.