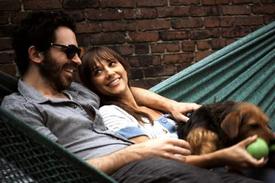 Some actors like to shuttle through different characters; some prefer the stability of being themselves. Rashida Jones is decidedly self-possessed. She knows herself, knows her strengths, and yet likes to choose parts that push her into uncomfortable territory. Which is why the I Love You, Man and Social Network star had to take on the role of Nat in Monogamy, where she tackles playing the increasingly estranged fiancee of Chris Messina's Theo in a role that also required her to take the stage as a singer-songwriter. "It's so exposing and hideous," she laughs, "we didn't prerecord." Boxoffice caught up with Jones to talk about finding a comfortable place for herself as an actress and performer in Hollywood.

The focus of Monogamy is your co-star Chris Messina's struggle to get "intimate" with you, his fiancee, and how he then becomes obsessed with another woman. But how did you uncover your character's motivation—and is she deliberately withholding?

Being a woman and being an actress, it's hard to not become just a two dimensional sounding board for whoever your male counterpart is. It was very important to Dana [Adam Shapiro, director of Monogamy and the Oscar-nominated Murderball] as a director that it not be like that—and that the audience believed this is an actual couple and could see the complication, the dynamics of power in the relationship. It's never one person's fault unless it's just a sin. Chris's character definitely f--ks up and there's an intimacy thing between us—I'm not putting out, which is so strange, but that's kind of my responsibility. And for whatever reason, maybe subconsciously, that's my fear about getting married because I do say at certain point in the movie that I'm scared, too, and maybe that's how my fear is manifesting itself. I'm backing off, I'm distancing myself, I'm not sleeping with him, and in a way that's the thing that sets him on this journey to look for something outside

When you're preparing a character, is it easy for you to be intuitive when you play those scenes and not have to decide her reasons?

You know, the thing to do is just be open. And hopefully, you have great actors, which I get with Chris Messina. You're open and you try to stay intuitive and both those things kind of come to you. I know that sounds like a cop-out, but I do feel like that's really the only thing you can do with acting. If you try to carve out a performance based on an end game, it's going to be obvious. I'm not a character actor—I will never be—and the most I can ever do is be myself and bring whatever part of myself to a character.

There are tons of movies about the 20 and 30-something migration between dating and getting serious. What stands out to you about this story?

I like this story because it's almost like an allegorical exploration. It's so extreme. It's not so extreme in terms of how fascinated he becomes by this person he doesn't know and what lengths he goes to to destroy his relationship, but I do think it's kind of symbolic for something dangerous that is happens with relationships at this age. I think it's just a natural progress of where we are and modernity, but we don't have to settle down anymore. We have so many options and our whole existence—especially with marriage—is to exercise our options. Settling down is in direct opposition to exercising your options, so what's the purpose of monogamy, of committing your self to someone? And is everyone capable of it, and does everyone want it, and if you don't want it do you feel forced into it culturally? Even if you do want to, do you know if the other person wants it? There are a lot of things being explored here. And if you're scared of it, how do you react? Do you convince yourself, do you go outside your relationship, can you communicate about it?

You mentioned that a character like this can be a thankless job for an actress because she usually doesn't get as much interesting stuff to do as the male counterpart. Is it reliant on the director to bring those extra dimensions to a character or is it you who does the work to make her something more than the harping or adoring girlfriend?

Well it certainly helps if the director is open to the possibility, if they haven't decided what they want the movie to look like. That's what great about Dana. Because he comes from documentaries, he wanted to make a "documentary" about a couple—that was what was interesting to him about this. And in doing that, he gave Chris and I a lot of freedom. That doesn't always happen. I've been very lucky to work with male directors who don't hate women at all, they actually really love women and are interested in all their colors. Dana, we were very lucky because he let us go. We were shooting on RED cameras, so we would do these 25-minute takes. We would have a sketch with structure but he would just let us go and in doing that he defiantly empowered me. But you have to be a very confident, talented person to let your actors do that, and you have to know you're going to have it when you get to the editing room. But I could never say I don't roll my eyes and say, "Oh my God, there's so much work I have to do," and overcompensate. You're either working collaboratively or you're not.

How tough is it to balance fulfilling the needs of the movie while fulfilling yourself creatively?

Fulfilling the needs of the movie, that's too macro. That's not really my concern—it's more of the director's concern to fulfill the needs of the relationship in the movie. Chris had a much harder job because he had so many scenes alone where he had to create a point of view by just watching somebody and taking pictures of somebody. I had the advantage of having Chris, so I could create that with him, which made it so much easier.

How comfortable were you with playing a musician?

Not at all. I was really, really, really scared. It was part of the reason I did the movie because I knew she was a singer and I have so much wrapped up in performance and music. It's so exposing and hideous for me, so I felt like I had to face the fire. It was hard because I sang live-we didn't prerecord. I sang live in front of an audience of extras who were probably like "How is she doing? Who cares." It was kind of like being at an open mic night.

Why is music a more intimidating performing challenge than acting?

I don't know. I'm sure the next level is being a singer/songwriter and singing your own songs, but for some reason I feel like when singing you're telling a very different story, and the story is a much more naked, raw story. You're using melody to do it and it's so exposing. I'm terrified right now talking about it.

So I take it you won't be cutting an album?

It's one of those things that when you get through it, you're proud of yourself for having finished. I don't like to be an adult with any kind of fear, especially of something that I love so much. I love singing and I love music, so I'll just do that again. Hopefully it will be a little less of a jump.

If you did music in the future, you could probably get a pretty good producer.

Yeah, I could get in touch with people.

Let's talk about Dana. What does a documentary filmmaker bring to a fictional story?

I don't remember who said it, but you make a movie three times: you write it, you shoot it, you edit it. He really let the movie become something else. I think it was definitely a well-written script. It was simple, and clear and it was obviously what I responded to originally when taking the part. But he's so flexible, so collaborative, I think that comes from having sat and watched all this Murderball footage and finding a narrative in it. I think he did the same thing here—he kept pulling things out, and he had a lot of footage to look through to see the story.

In the last couple years, you've had so many different opportunities. Have you found the scale of work you're looking for, or is still it tough to find substantial female roles?

I feel pretty lucky in the sense that five years ago I was going to quit acting and I was totally okay with it. I had other plans and that was going to be fine. Not that I was going to give up, but I just felt like there wasn't a place for me—and the fact is there is this little place for me and I keep getting to do things that are interesting and challenging. I guess you could say I play a straight man a lot. Maybe that's who I am. I just play elements of myself, but every time I want a challenge, I'm lucky to find one.

Is transforming into a wholly different character not that important to you?

I think that it's just about knowing yourself. I'm old enough now to know myself, and I know what I'm good at and I know what feels good and works for me. People who can do a huge transformation, a huge shift as an actor, I can really appreciate that. It's hard and I'm totally down with that. I just wouldn't characterize myself as a character actor, because that wouldn't be fair to the people who actually do it and do it well. For me, I would like to play to my strengths and being natural is something I'm good at. Being funny in a natural setting is a highlight for me as an actress, and I want to continue to be challenged. I like my career. I feel really good about the things I've been able to do.