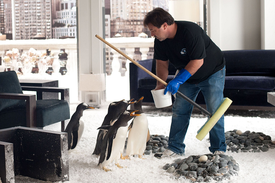 Penguins don’t have a lot of emotion. They are what they are. They don’t do a lot of the cartoon stuff you see in Madagascar where they give them feelings and eyebrow movement. They just stand and they waddle and make noises and go swimming.

With each individual animal, they show a different emotion. Penguins can be terrorized from a sea lion or whatever is trying to kill them. Those are the only emotions you’re going to see with an animal like that. But a dog—say, one who has to act like he's wounded—has variations: is he holding his paw, can he not walk on it, is he crawling on his stomach?

The beauty of the penguins in Mr. Popper's Penguins is they all look alike so even if you’re using one penguin, you have seven to back him up. We had eight. These particular penguins came from the Biodome in Canada. They’re very similar to dealing with chickens. They tend to run away from you rather than be with you. Our goal was to get them to recognize us from food and socializing with them. They kind of accepted us as a part of their group. They still have their instincts of being afraid of humans, but we got them to the point where we could put them in front of the camera to interact with Jim Carrey and get some shots.

Jim Carrey was awesome with the birds, very intuitive. He was very conscious of their well-being, so he figured out how to feed them and the nuances of the group. They each eat differently: some are more aggressive than others and it's six birds trying to get a piece of fish and trying not to drop it.

The challenge was to create an environment that would be as close to their climate as possible. I had a couple of facilities built so the birds could live and acclimate in the training room that was 45 degrees and when we got on the set, it would be anywhere from 45-50 degrees when we shot. Yes, everybody was cold and there was some complaining, but in the end that was what was needed.

I've trained a bear, a leopard, tigers, cougars, wolves, owls, eagles, parrots—all species of parrots—canaries, starlings, quail, geese, all water fowl, ravens and crows and seagulls, vultures, pigeons, macaws, dogs, cats, raccoons, camels, elephants, orangutans, chimpanzees, lizards, pigeons, sloths, bats. Penguins, of course. I never really spent much time with marine animals. That’s not my element, being in the ocean. Rats, mice cockroaches. I had a cockroach run across the floor in The Crow and I trained my raven to fly down and eat a fake one off the ground. I had a cockroach run under Sam Elliot’s face. You know, that kind of stuff.

An animal trainer is someone who actually takes time to spend with animals and train it to do specific behaviors with consistency. And the animal retains recall, which means he remembers what he was taught. An animal tamer—or an animal wrangler—doesn’t necessarily train the animal. That’s the difference. If I need a dog to come over here and sit on this log and look into the camera and look camera left and hold it for three seconds and then get down and exit camera right, an animal tamer is not going to be able to get those features off.

There was a little bit of animal wrangling going on in Popper’s Penguins because you had to move the penguins into position. You couldn’t really train them precision-type like a dog because they didn’t have the intelligence. All birds have different levels of intelligence. There are some that are smarter than others, but the smart ones are very smart.

The animal industry is a billion dollar industry, I mean, people love their animals. A lot of people don’t train their animals—they just spoil them and love them and they hang out with them and that’s fine, that’s wonderful. Some people are more in tune with the intellect of the animal: teaching your parrot to talk, or teaching your cat to come to you when you open a can of cat food or teaching your dog to sit. People come up to me and say, “My dog does this, my cat does that,” and I say, “That’s very nice and good for you and good luck.” There isn’t anything anyone has that I wouldn’t be able to get or train myself for the company.

To me, to bring out the personality in the animals is awesome—I love that part of it. To make it seem effortless and put them in front of the camera so it looks like it isn’t trained. You watch the movie and don’t even think about it. And somebody says, “Oh, there was this and that,” and you're like “Yeah, the family dog.” That’s a reward for me.

Like the new The Girl With the Dragon Tattoo, which I worked on. The cat is actually a kind of an important part—even though it’s not an important part. If you’ve read the book and you’re watching the movie, it will be seamless. You’ll think the cat is a part of what you’re familiar with and if the audience isn’t familiar with it, it will be a part of a world they’re in for the moment. To me that’s just what it’s all about. When we did Marley and Me, tons of people watched that movie and I don’t think they thought too much about what we had to do to go into training all of those dogs. They just watched the movie and enjoyed it for what it was.

CGI is a very useful tool. For Popper's, we had to do a lot of live penguin stuff and then they’re going to have CGI penguins for things like the dancing. But when they decide to do all CGI and no animals, that’s obviously going to affect us. At this point, we still need to provide them with some information from real animals to put in the computer. And while they’re having success at replicating certain animals, they’re not having success in some other animals—animals with fur on them are a little harder to replicate than a bird or a penguin or a lizard.

The biggest misconception about what we do is that we don’t love our animals—that we abuse them. If you saw the relationship we have with our animals, you wouldn’t even ask that question. They wouldn’t do anything for us if we did those kinds of things. There still are a few bad apples, but you get that in any industry in any job.

I'm 52. I started full-time in ’92. I had no interest in animals any more than any normal person growing up. I just kind of gravitated toward it, found out that I was quite good at it and pursued it.

I started working at Universal Studios in 1984 for Birds and Animals Unlimited, a live animal show. I was getting front of thousands of people each year and doing thousands of shows in front of a group of people with 5, 6, 7, 8, 9, 10,11, 12 different types of animals in a 20-minute show. I have no problem being under pressure and on stage. Going on set was very easy for me.

I love being on set. I love making movies. An average day at work, I get up at 4 in the morning, leave about 4:30 and go to the ranch, board up the animals then drive to set, and then sit on set for 12 hours. Even if it’s not a very good movie, I’m proud to be professional and show people things they might not have seen before. A lot of people have animals but don’t know some of the things can be done and what you can do. When you show them that, they’re pretty amazed.