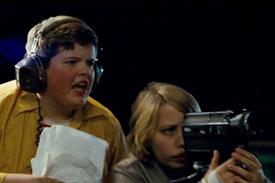 J.J. Abrams has a vision and it's easy to imagine the Super 8 director barking orders to his cast and crew to bring that vision to life. Actually you don't need to imagine it, thanks to Riley Griffiths’ performance as Charles, the filmmaker within the film whose pet project puts the story in motion. The first time actor borrowed mannerisms and behaviors from director J.J. Abrams to understand the drive of an ambitious director—be it one helming a big summer release or a kid with a Super 8 camera and an overflow of enthusiasm. Griffiths tells Boxoffice about what it's like to work on one of Abrams' super-secret sets, becoming best friends with his movie best friends, and where he hopes this adventure will take him.

What was it like having to keep the secret about the film's story from your friends at school—was there anyone you trusted and swore to secrecy?

No. I thought it was kind of cool because my friends would call me up and we would be having a normal conversation and then all of a sudden they would be like, “Riley, what’s in that freighter?” It was so cool to see their facial expressions when it came out and everything. But it’s so weird to be able to talk about it now, because going through almost a year of not being able to talk about it at all, it feels weird.

Do your friends treat you any differently now?

No—I mean, they remember me as the kid I am and they don’t really think of me as a movie star, I guess.

You had to gain weight to play this kid—why, and did that change the way you played him?

It didn’t really change the way that I played him. They just really wanted Charles to be more bulky, I guess.

How easy was it to imagine the monster? And how did you know where to look?

J.J. would tell us to look at the top of a tree and tell us to imagine the scariest thing we could ever imagine. And then when we saw the movie, it was like 50 times scarier than anything I could have ever thought of—it was way scarier than I thought.

How much did you know about this movie as you were making it? Did you only know what happened in the parts where your character appeared?

No, I was actually given the whole script. J.J. wanted us to know the whole movie, so we could really understand the whole thing.

What was the first Steven Spielberg movie you ever saw?

The first Spielberg movie I ever saw was probably Indiana Jones. I love those movies—they’re funny and they have adventure.

Are you a big movie fan?

I’m pretty much a sports guy. I play football, basketball, baseball. I snowboard and I mountain bike and I longboard and I skateboard.

Did you have to watch a lot of movies to get comfortable with the movie making aspects of the story?

I didn’t really do too much research. J.J. just taught us so much along the way. Like the sound guys, the prop guys, the camera guys, they would all brief us about their jobs, and that was really cool. They kind of helped us have a better understanding of everything.

Did you have the character pretty well-defined, or did you come onto set and sort of absorb aspects of the crew’s personalities?

All of the kids, J.J. kind of let us all create our characters. He gave us the freedom to create them. He gave us a basic feel, but he pretty much gave us a lot of freedom with that.

What did you and the other kids do to create the sense that you were lifelong friends?

Oh my gosh. We spent so much time together off set. We’d have sleepovers, and we’d go swim, we’d go and hang out, we would do things like Skype when we weren’t together. These guys are definitely like my lifelong friends, and I bonded with them so much over filming, so I love all of them like they’re brothers.

How much of an adjustment was it to get comfortable with the '70s clothes and gadgets?

My parents grew up in that time period, so you hear all of the stories about when they were kids and what toys they played with and what kind of gum they chewed and candy they ate. When we stepped on set, it was like, “Oh my gosh, I’m living my parents’ childhood right now.” It was just like a time machine, really.

What in particular do you like about your character?

My character and I, we’ve got some things in common. I mean, we’re both very passionate about what we do, and we both have a love for the arts. And what I really liked about Charles is what you saw isn’t what you got. Like, Charles kind of puts up a tough front, but he really did have a soft center and cared inside—and you would never know it.

What was the toughest thing to deal with while you were making the movie?

The biggest challenge for me was that my family is really close, and my dad had to stay back and do his job while we went to go film. So being away from my dad was the hardest thing for me.

What’s a new movie that you really liked?

I recently saw Tron and I didn’t think I’d like it at first, but I actually ended up really liking it. Garrett Hedlund is one of my new favorite actors.

What are your plans with acting going forward?

What kind of movie would you make if you were actually a director?

Do you have anything lined up after this?

I’ve got some scripts I’m reading, and I’m going on auditions, but nothing’s set in stone. I’ve got some meetings and stuff, but I haven’t signed any contracts yet. But like I said, acting’s what I want to do for the rest of my life.

How has it felt to deal with all of the attention and recognition you’ve received since the movie has come out?

It’s been very different because I grew up in a small town, and it’s been really crazy. We kind of fell head over heels into this, so we’re just learning as we go.