'Beats, Rhymes & Life: The Travels of A Tribe Called Quest' Director Michael Rapaport on Pissing Off His Subject 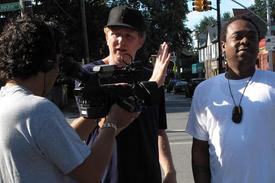 A Tribe Called Quest is one of the most important and influential hip-hop groups of all time. Their first three albums offered an almost unparalleled trilogy of innovative, iconic music—more than a decade after their last official release, they're still played as often and praised as wildly as any multi-million-selling up-and-comer. But when actor Michael Rapaport (Higher Learning, True Romance) started directing his documentary Beats, Rhymes & Life: The Travels of A Tribe Called Quest, his interests went beyond just celebrating the groundbreaking trio of Q-Tip, Phife Dawg and Ali Shaheed Muhammed. And he got more even than he bargained for: a complex portrait of a group's evolution, he documents the alchemy-and sometimes animosity-that brought the band together and eventually broke them up. Boxoffice asks Rapaport why Tribe member Q-Tip is now distancing himself from the documentary.